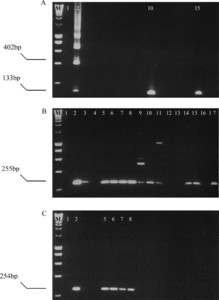 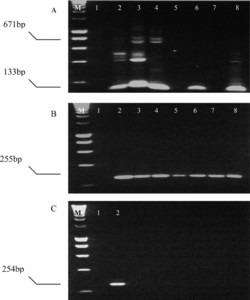 The performance of 3 PCR assays for the identification of the G1 sheep genotype of Echinococcus granulosus was evaluated using tissue and canid fecal samples. The “Dinkel” and “Štefanić” primers were the most sensitive in detecting E. granulosus DNA in feces of necropsied dogs (73.7% and 100%, respectively). The “Abbasi” primers detected 52.6% of E. granulosus infected dogs but were the most species-specific, cross-reacting only with Echinococcus shiquicus (tissue 90.9%; feces 75%). The Štefanić primers were the least specific (tissue, 27.3%; feces, 25%) for E. granulosus. The Dinkel primers also showed inter-species cross-reactivity (tissue, 63.6%; feces, 100%) but were found to be strain-specific for the E. granulosus G1 sheep genotype. Improvement of PCR tests for Echinococcus species and subspecific variants should rely on the use of less-conserved genes and development of protocols that improve the quality and quantity of DNA extracted from feces.