Distribution of major symptoms in acute schistosomiasis (N = 21) (A) and post-travel NSE (N = 34a) (B). Two additional NSE cases suffered from systemic symptoms without localizing complaints.

Eosinophil count before and after praziquantel or albendazole treatment of shistosomal eosinophilia and NSE. SAE, Schistosoma-associated eosinophilia.

Suggested algorithm for the evaluation of eosinophilia in returning travelers. 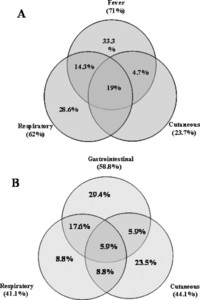 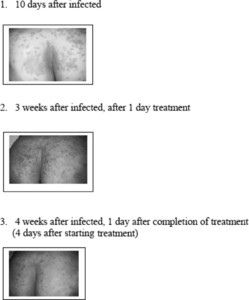 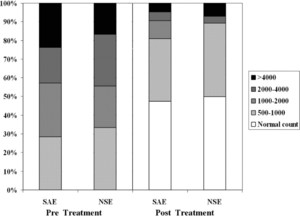 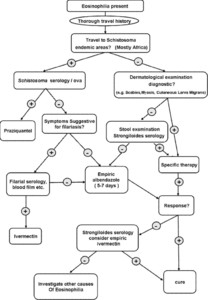 Eosinophilia is not uncommon among returning travelers; however, the optimal diagnostic and therapeutic approach in travelers, as opposed to immigrants and refugees, is not clearly established. This was a retrospective case series. All returning travelers from developing countries presenting at the post-travel clinic with eosinophilia (≥ 500 cells/mcl) during 1994–2006 were evaluated. Data were compared with other referrals to the post-travel clinic and with a random sample of a pre-travel clinic. Of the 955 returning travelers evaluated during the study period, 82 (8.6%) had eosinophilia, and 44 (4.4%) were diagnosed with schistosomiasis. Another 38 (4.2%) cases presented with non-schistosomal eosinophilia (NSE), among whom a definite parasitologic diagnosis was achieved in only 23.7%. However, an empiric course of albendazole led to a clinical improvement in 90% of NSE cases. Helminthic disease probably accounts for the majority of cases of post-travel eosinophilia. Empiric albendazole therapy should be offered to undiagnosed NSE patients.