Adult female (A) and male (B) A. cajennense (the Cayenne tick), a vector of RMSF in Latin America. Abundant spotted fever group rickettsiae and rickettsial antigens (red) are stained by IHC in tissues of a patient with fatal RMSF, in vascular smooth muscle cells of a hepatic arteriole [arrow] (C), and in endothelial cells of small vessels in the cerebellar leptomeninges (D). The involved vessels show no appreciable inflammatory cell infiltrates despite extensive infection with large numbers of rickettsiae. Immunoalkaline phosphatase stain with fast red-naphthol phosphate and hematoxylin counterstain (polyclonal anti-Rickettsia rickettsii antibody at 1/500); original magnifications, ×100 (C) and ×50 (D). 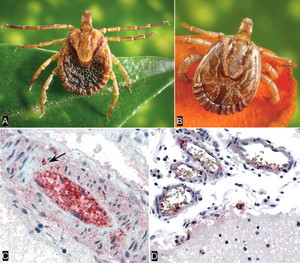 We describe the first molecular confirmation of Rickettsia rickettsii, the cause of Rocky Mountain spotted fever (RMSF), from a tick vector, Amblyomma cajennense, and from a cluster of fatal spotted fever cases in Argentina. Questing A. cajennense ticks were collected at or near sites of presumed or confirmed cases of spotted fever rickettsiosis in Jujuy Province and evaluated by polymerase chain reaction assays for spotted fever group rickettsiae. DNA of R. rickettsii was amplified from a pool of A. cajennense ticks and from tissues of one of four patients who died during 2003–2004 after illnesses characterized by high fever, severe headache, myalgias, and petechial rash. The diagnosis of spotted fever rickettsiosis was confirmed in the other patients by indirect immunofluorescence antibody and immunohistochemical staining techniques. These findings show the existence of RMSF in Argentina and emphasize the need for clinicians throughout the Americas to consider RMSF in patients with febrile rash illnesses.