A, Neighbor-joining phylogenetic relationships inferred from variable domain V7 of the small subunit ribosomal RNA gene of malaria and related parasites in this study (WPN4, WPN5, WPN6, MFRC11, MFRC15 and MFRC18) compared with sequences of known species and their GenBank accession numbers. Sequences of isolates WPN4 (clones a, b, and c), WPN5 (clone a), WPN6 (clones a, b, c, and d), MFRC15 (clone b), and MFRC18 (clone a) are identical with Plasmodium inui (accession no. AF049122). B, Linearized tree based on 1,881 sites of the same gene showing the relationships among P. inui isolates/clones in this study (P. inui and P. gonderi from the GenBank database). The evolutionary distances were computed using the Kimura 2-parameter method and are in the units of the number of base substitutions per site. The percentage of replicate trees in which the associated taxa clustered together in the bootstrap test (1,000 replicates) over 50% values are shown next to the branches.

Phylogenetic tree based on the mitochondrial cytochrome b genes of malaria and Hepatocystis spp. inferred using the neighbor-joining method with Kimura 2-parameter model. Percentage of bootstrap supports over 50% are shown along the branches. Scale underneath the tree indicates the number of base substitutions per site. Sequences from known parasite species are listed along with their respective GenBank accession numbers. Sequences of MFRC11 clones A and B were newly obtained in this study. 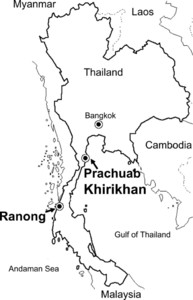 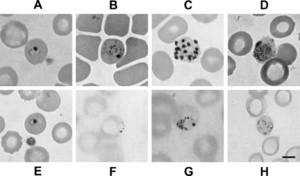 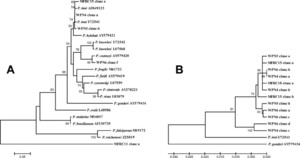 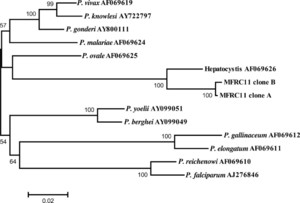 Southeast Asian macaques are natural hosts for a number of nonhuman primate malaria parasites; some of these can cause diseases in humans. We conducted a cross-sectional survey by collecting 99 blood samples from Macaca fascicularis in southern Thailand. Giemsa-stained blood films showed five (5.1%) positive samples and six (6.1%) isolates had positive test results by polymerase chain reaction. A phylogenetic tree inferred from the A-type sequences of the small subunit ribosomal RNA gene confirmed Plasmodium inui in five macaques; one of these macaques was co-infected with P. coatneyi. Hepatocystis, a hemoprotozoan parasite transmitted by Culicoides, was identified in an isolate that was confirmed by analysis of mitochondrial cytochrome b sequences. All malaria-infected monkeys lived in mangrove forests, but no infected monkeys were found in an urban area. These findings indicate regional differences in malaria distribution among these macaques, as well as differences in potential risk of disease transmission to humans.