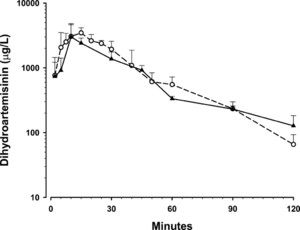 Pharmacokinetics of Dihydroartemisinin in a Murine Malaria Model

Pharmacokinetic properties of dihydroartemisinin (DHA) were determined in mice given 100 mg/kg intraperitoneal DHA. Half-life, CL/F, and V/F were 25 min, 61.3 L/hr/kg, and 36.3 L/kg in malaria-infected mice and 19 min, 50.9 L/hr/kg, and 23.0 L/kg in controls. These data are valuable for pharmacokinetic–pharmacodynamic evaluations of DHA in murine models.

Dihydroartemisinin (DHA) is an important artemisinin derivative, both as a component of antimalarial combination therapy1,2 and as the active metabolite of the widely used parent compounds artesunate and artemether.3 Although the pharmacokinetics of artemisinin drugs have been characterized in humans,3 pharmacokinetic–pharmacodynamic relationships are not well understood, and therapeutic strategies are largely based on empirical clinical evidence.4,5

Advancements in antimalarial treatment strategies, especially combination regimens, should be based on detailed in vitro and preclinical studies. Murine models of malaria are well established6 and could have a prominent role in dosage regimen design, albeit with due consideration of allometric scaling principles and species differences in drug metabolism. Currently, most murine malaria studies use the Peters 4-day test,6 which evaluates suppressive efficacy. The pharmacokinetic properties of the antimalarial drugs in mice are rarely considered or available.

Detailed pharmacokinetic data for the artemisinin drugs in mice have not been reported. However, several studies have been conducted in healthy and malaria-infected rats,7–13 suggesting that the elimination t1/2 for DHA (15–25 min) is approximately 2- to 3-fold shorter than in humans (40–70 min).3 Hence, we sought to establish the pharmacokinetic properties of DHA in control and malaria-infected mice to facilitate future studies of combination therapies.

The study was approved by the Curtin University Animal Experimentation Ethics Committee. Maintenance and care of animals complied with the Australian Code of Practice for the Care and Use of Animals for Scientific Purposes. Male Swiss (5–6 weeks old) and Balb/c mice (7–8 weeks old), were obtained from the Animal Resource Center (ARC, Murdoch, Western Australia) and housed at 22°C in a 12-hr light/dark cycle, with free access to sterilized commercial food pellets (Glen Forrest Stockfeeders, Perth, Western Australia) and acidified water (pH 2.5).

Plasmodium berghei ANKA parasites were obtained from the Australian Army Malaria Research Institute (Enoggera, Queensland, Australia) and maintained by weekly blood passage in Balb/c mice. An inoculum of 107 parasitized erythrocytes per 100 μL was prepared by dilution of blood harvested from Balb/c mice in citrate–phosphate–dextrose solution, pH 6.9,14 and used to infect the experimental (Swiss) mice. Parasitemia was monitored from peripheral blood smears until the predetermined study endpoint (termination of the experimental protocol, or > 40% parasitemia or > 10% reduction in mouse body weight in less than 24 hr).

DHA in plasma was analyzed using a validated HPLC assay,15 with modification of the extraction procedure. Briefly, 200 μL of plasma was mixed with internal standard (20 μL of 5 mg/L artemisinin in methanol), 100 μL of 0.1 M Walpole’s acetate buffer, pH 4.8, and 900 μL of 20% v/v ethyl acetate in butyl chloride. The mixture was gently agitated for > 5 min and centrifuged, and the organic layer (usually 700–800 μL) was aspirated and dried under nitrogen. The residue was reconstituted in 100 μL of mobile phase, and the injection volume was 80 μL.

Consistent with the principles of destructive testing,16,17 the mean plasma concentration for each group of mice was used to generate pharmacokinetic parameters. Noncompartmental pharmacokinetic analysis (Kinetica, version 4.2; Thermo Fisher Scientific, Inc., Waltham, MA) was used to estimate the area under the plasma concentration–time curve (AUC), terminal elimination half-life (t1/2), apparent clearance (CL/F), and apparent volume of distribution (V/F). Statistical analysis and data representation were performed using SigmaStat 2004 and SigmaPlot 2004 (SPSS, Inc., Chicago, IL). The method of Yuan17 was used to determine SD for the AUC and to compare AUC for control and malaria-infected mice. The elimination rate constant (k) for the two groups of mice was compared using the 95% confidence interval of the linear regression for k (SigmaPlot).

The principal pharmacokinetic descriptors (t1/2, CL/F, V/F) are shown in Table 1. The AUC in malaria-infected mice (1.63 ± 0.11 mg·h/L) was significantly lower than in control mice (1.96 ± 0.10 mg·h/L; P < 0.0517). The 95% confidence intervals for k overlapped (data not shown), indicating that the elimination t1/2 values of DHA for control and malaria-infected mice were similar (Figure 1). Data from the present study were consistent with previous investigations in rats (Table 1).

Our study demonstrates that the t1/2 of IP-administered DHA in malaria-infected and healthy mice (19–25 min) is approximately 2- to 3-fold shorter than in humans (40–70 min), whereas CL/F and V/F were substantially larger than in humans (Table 1). Although the present study did not establish any significant difference between malaria-infected and healthy mice in CL/F and V/F, data from human studies indicate that CL/F and V/F of DHA is lower in malaria infection (Table 1), most likely due to an increase in bioavailability.18,19 These pharmacokinetic data for DHA in mice should prove valuable in pharmacokinetic–pharmacodynamic evaluations of DHA in a murine malaria model.

Pharmacokinetic parameters for DHA in mice, rats, and humans