Comparative reactivity of individual promastigote-secreted antigens in ELISA and their ability to distinguish serum samples from negative (Ref−ve) vs. Leishmania positive (Ref+ve) dogs.

Comparative reactivity of individual promas-Ag and a cocktail antigen in ELISA with negative and positive dog sera samples. Antigens were coated at 50 μg/mL concentration; Sera were reacted at 1:2000 dilution for 1 h RT; Conjugate was used at 1:20,000 dilution and incubated for 30 min RT. Readings were taken after reacting with TMB substrate for 30 min and with the addition of stop solution.

Reactivity pattern of canine serum samples tested in promastigote exo-antigen-based ELISA. A cut-off value (COV) (OD = 0.3) was determined based on the mean + 3SD reactivity values of N = 18 negative serum (from non-endemic region) samples. A total of N = 14 serum samples derived from clinically infected and parasitologically proven dog samples when tested in ELISA were found to be all positive. 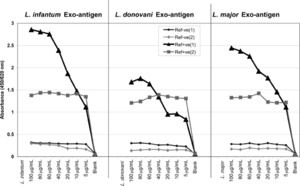 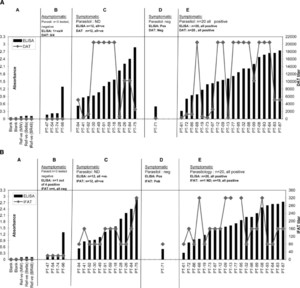 Dogs which are infected with leishmania parasites serve as major reservoir hosts for zoonotic visceral leishmaniasis. The incidence of zoonotic visceral leishmaniasis is rising in many countries. This may be associated with the continuing drift of people and their pets from rural areas into peri-urban settings, particularly at the fringe of large cities. At the same time, there is evidence of adaptation of sand fly vectors to these urban settings. This has created an alarming situation because, even though domestic and stray dogs may be infected, many remain asymptomatic but are still highly infectious to the sand fly vectors and thus pose a serious threat to human health. Over half of the infected dogs have asymptomatic infections and current assays are not sensitive enough under field conditions to distinguish asymptomatic from symptomatic dogs. There is an urgent need for a specific and sensitive screening tool for use in the field. We have previously demonstrated that promastigote exo-antigen-based ELISAs can be used in the specific diagnosis of human visceral leishmaniasis (HVL). A cocktail of exo-antigens prepared from three species (L. infantum, L. donovani, and L. major) was used to develop and optimize a canine ELISA assay. Serum samples from dogs with a variety of pathological conditions but living in a non-leishmania endemic area were used as negative controls and their reactivity was used to determine a cut-off value for the ELISA. Samples from dogs residing in a leishmania endemic area were tested in parallel using direct agglutination (DAT), immunofluorescence (IFAT), and ELISA. The ELISA results correlated closely (100%) with the clinical symptoms, and were elevated in one asymptomatic dog. This sample was also found to be positive by IFAT. Based on its sensitivity and specificity, the cocktail exo-antigen-based ELISA may prove useful, even at 1:2,000 serum dilutions, for screening dogs in different geographical regions of the world.