Vascular changes commonly seen in the brain of the Loa loa encephalopathy patient. A, Cellular infiltrates, thickening of the vessel wall. (B) The accumulation of pigmented material in phagocytes. 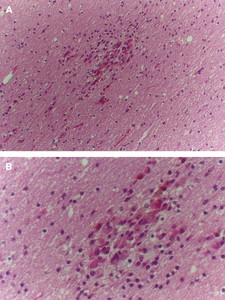 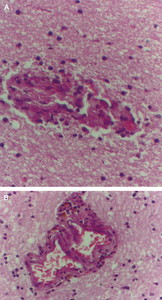 Encephalopathy after Ivermectin Treatment in a Patient Infected with Loa Loa and Plasmodium spp.

Despite over 350 million people being safely treated with ivermectin, there have been rare cases of death post-treatment; these events are most often associated with high Loa loa microfilaremia. This first autopsy description of an encephalopathy case following the administration of ivermectin involves a 45-year-old male who became comatose 3 days after treatment. He slowly deteriorated over 5 weeks and died at 54 days after the anthelminthic treatment, probably as a result of a secondary skin or pulmonary infection exacerbated by malnutrition. The major pre- and post-autopsy findings included the presence of high loads of Loa loa, positivity for Plasmodium, the presence of a longstanding respiratory condition, and vascular pathology in the brain. The central nervous system lesions have similarities with those described in previously reported cases of Loa loa-associated death following diethylcarbamazine treatment.