Map of the Lao PDR showing provinces and the distribution of noma patients. The home provinces of patients with clinical details described here (2002–2007) are in orange and those of patients noted by Interplast (2003–2007) are in yellow. Province names follow Sisouphanthong and Taillard.34 This figure appears in color at www.ajtmh.org. 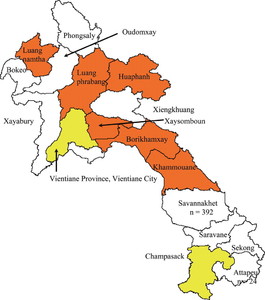 Noma in Laos: Stigma of Severe Poverty in Rural Asia

Noma, or cancrum oris, is a debilitating necrotizing ulcerative stomatitis that destroys the mouth and face. It usually starts in early childhood and is associated with severe poverty, malnutrition, and infections. It is most frequently described from sub-Saharan Africa but is under-reported. There have been very few reports from Asia. We describe the clinical and social features of a series of 12 patients with noma from remote poor villages in rural Lao People’s Democratic Republic (Laos). Noma is an ominous stigma of severe poverty and the description of this disease emphasizes the importance of poverty reduction and nutritional improvement in Lao development. In the meantime, more awareness of the problem and the importance of early therapy in acute noma by primary health care workers may reduce mortality and prevent progression to severe disfigurement.