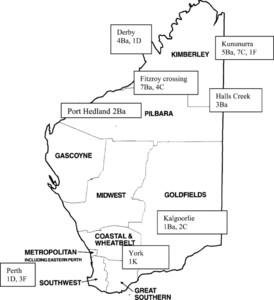 We studied the serovar distribution of Chlamydia trachomatis in patients with clinical eye disease in Western Australia. Most disease occurred in indigenous communities and was caused by trachoma serovars Ba and C. Serovar Ba was genetically homogeneous throughout Western Australia and identical to strains previously described in indigenous communities in Northern Territory. This finding probably results from movement of these populations, and suggests that a widely coordinated, rather than local or regional, approach is needed to control trachoma in mobile populations. Serovar C strains within Western Australia were homogeneous but distinct from those in Northern Territory, possibly because of inherent differences in transmissibility or differences in population movements among communities carrying the different serovars. Genital serovars were occasional causes of eye diseases in infants, adolescents, and adults in trachoma-endemic areas. These serovars should be considered in the differential diagnosis of acute follicular conjunctivitis in these groups.

Trachoma, which is caused by infection with Chlamydia trachomatis serotypes A, B, Ba, and C, is the world’s leading cause of preventable blindness. Australia is the only developed country where trachoma remains a significant health problem.1 Unfortunately, a high prevalence of trachoma persists among some populations of indigenous Australians related to poor living conditions.1 Trachoma-endemic communities are located in isolated and sparsely populated regions within the states of Western Australia, South Australia, and the Northern Territory.

The World Health Organization has recently declared a target of global trachoma eradication by 2020.2 There has been a concomitant increased interest in diagnostic advances, including the potential applications of molecular testing.3 DNA detection of C. trachomatis using the polymerase chain reaction (PCR) has been used to define the epidemiology of trachoma infections and to assess the effectiveness of mass treatment with azithromycin.3,4 Insight into the molecular epidemiology of trachoma in the Northern Territory was recently provided by genetic studies characterizing the C. trachomatis outer membrane protein 1 (omp1) gene, which suggested that evolutionarily distinct strains of Ba and C serotypes are responsible for trachoma disease in northern Australia.5 However it was not known whether this applied across a broader geographic area.

The trachoma-endemic areas in Western Australia also have high rates of genital Chlamydia infection. For example, the Kimberley region had a notification rate of 1,203.9 per 100,000 population in 2004, compared with rates of less than 200 per 100,000 in metropolitan Perth.6 Chlamydia trachomatis serovars D–K, the causative agents of genital Chlamydia infection, may also cause the ocular diseases ophthalmia neonatorum and paratrachoma.7 Therefore, defining the role of au the different serovars in eye disease in these populations is important in public health planning.

This study was undertaken to determine the comparative roles of C. trachomatis serovars in eye disease in remote populations compared with metropolitan populations and to further define the molecular epidemiology of trachoma.

Stored extracts from eye swabs received at Path West Laboratory Medicine WA (PathWest) that had previously tested positive for C. trachomatis were used for sequencing the omp1 gene coding for the major outer membrane protein (MOMP). Samples used were collected between January 2001 and June 2004 from patients with a clinical history of conjunctivitis.

Because clinical specimens had already been tested for Chlamydia infection at the request of their medical practitioner and the results of this testing did not influence patient management, no ethical concerns were identified with the study. Patient confidentiality was maintained throughout the study and the identity of individual indigenous communities was protected.

Chlamydia trachomatis DNA was detected by the omp1 PCR in 46 stored conjunctival swab extracts collected from 42 patients between March 2003 and June 2004. No product could be recovered from older stored specimens. Four patients had two positive specimens collected within one month of each other. Sequencing confirmed that organisms present in the first and second swabs in these instances were genetically identical. Therefore, we assumed both results reflected one episode of infection and excluded the results of the second sample from the data analysis.

Of the remaining 42 specimens, five were obtained from patients residing within 100 km of Perth, the capital of Western Australia. Thirty-seven specimens originated from residents of remote trachoma-endemic regions: 32 from communities within the Kimberley region, two from the Pilbara region, and three from the Goldfields region (Figure 1). Twenty patients were male and 22 were female. The sample included two neonates less than one month of age, 32 patients between 1 month and 13 years of age, and eight patients ≥ 14 years of age (Table 2). The two neonates (one from urban Perth and one from the Kimberley) had eye infections with genital strains of C. trachomatis F (1 case) and D (1). All children between one month and 13 years of age were from remote locations and were infected with the trachoma strains Ba Apache 2 and CTW3OT. In persons ≥ 14 years of age, five eye infections were caused by genital trachoma serotypes D (1), F (3), and K (1). The patient in this age group with ocular serotype D infection was from the Kimberley; the remainder of the genital strains were identified in patients residing in urban Perth. Three trachoma strains were detected, two Ba and one C serovar, in patients from the Kimberley.

All 13 serovar C samples were genetically identical and had five mutations when compared with the GenBank reference strain CTW3OT (AF352789). These mutations consisted of T569C, A571G, G972A, G1003T and A1063C, which resulted in four amino acid changes (Table 2). Of the 22 Ba strains, 21 were identical with mutations A511G and C662T when compared with the prototype strain Ba Apache (AF063194); both of these mutations resulted in amino acid changes (Table 3). One strain had an additional silent mutation G815A that was confirmed by repeat testing.

We studied the genotype distribution and molecular epidemiology of C. trachomatis strains from 42 patients with clinical eye disease in Western Australia with the aim of developing a better understanding of patterns of transmission. The clinical classification of the eye disease was not specified for most cases. Because the treating physicians had varying experience with trachoma, classifications could not be regarded as reliable or consistent. Therefore, this information has not been included in this study.

The C. trachomatis MOMP gene (omp1) was chosen as the target for this study because it consists of five constant and four variable domains encoding antigenic determinants for each serovar. The omp1 sequences of 15 known serovars have been well characterized, and prototype strains are available in the GenBank database.9

In this study, genital serovars caused ocular infection in two neonates, a finding that is consistent with acquisition from the maternal genital tract. In contrast, all children between 1 month and 13 years of age were infected by ocular serovars and were from remote locations known to be endemic for trachoma. In the patients ≥ 14 years of age, all C. trachomatis ocular disease in urban areas was caused by genital serovars. However, in remote area patients, persons in this age group had ocular infection with trachoma (n = 3) and genital subtypes (n = 1). Because trachoma is usually diagnosed clinically, we received only a small number of specimens, of which only some could be genotyped because of deterioration of the older samples during storage. Therefore, there were insufficient data to properly assess the contribution of the genital serovars of C. trachomatis to eye disease in trachoma-endemic communities. Although genital serovars of C. trachomatis are not known to cause trichiasis and corneal opacification, they may produce a follicular conjunctivitis resembling early trachoma.7 Our data suggests that, although uncommon, some paratrachoma cases should be anticipated in areas of high genital Chlamydia incidence, and that this should be considered in the differential diagnosis of follicular conjunctivitis occurring in persons ≥ 14 years of age, even in trachoma-endemic areas.

Other studies have also shown cross-over infections between genital and ocular sites, with ocular serotypes being reported from genital swabs,9 as well as eye infections with mixed ocular and genital serovars.10,11 We cannot comment on the occurrence of co-infection in Western Australia because our genotyping method is unlikely to detect mixed infections, with the dominant pathogen being preferentially amplified. Because the recommended treatment for both ocular and genital C. trachomatis infection is oral azithromycin,2 it would not influence individual patient management. However, because the public health implications of paratrachoma and trachoma are different, differentiation is important in areas where both trachoma and genital Chlamydia infections are endemic among the sexually active population.

This study has added new information to a recent serovar study in indigenous communites5 that examined the omp1 sequence from conjunctival samples obtained in the Northern Territory. The investigators found 27 isolates of serotype C and 4 of genotype Ba, with a dichotomous distribution of the 2 strains. The serotype C strains were detected within coastal communities, and the Ba serotypes were found in an inland community, which implied limited spread of strains between communities. In contrast, our study showed that both the Ba Apache and C strains were present throughout indigenous communities in northern Western Australia, as well as the more southerly Goldfields region.

Sequencing of the omp1 gene of infecting strains has been conducted in other trachoma-endemic regions of the world and has also shown unique regional point mutations. It is not known if any of these mutations confer differences in virulence or transmissibility. Amino acid changes in the MOMP of genital C. trachomatis isolates have been speculated to lead to immune escape with persistent infection and more severe disease.10 Studies conducted in Tanzania and The Gambia tested this hypothesis in relation to ocular C. trachomatis infection.13,14 The strain diversity observed in these studies was attributed to both population migration and mutation of omp1. Disease severity correlated with infection with multiple genotypes with high organism load and with persistent infection or reinfection with the same genotype.

In conclusion, our study confirms that genital strains of C. trachomatis cause eye disease not only in neonates, but in teenagers and adults in Western Australia. Also, among the true trachoma serovars (Ba and C), there was a remarkable lack of genetic divergence of serotypes in Western Australia despite vast distances between communities and towns from which specimens were obtained. Furthermore, the Ba Apache strain widely distributed throughout Western Australia is identical to the strain present in an inland community in Northern Territory. There was good coordination of trachoma-control activities within but not between regions, despite anecdotal reports of high levels of mobility of indigenous persons. The data from this study support the need for a coordinated approach to control trachoma across isolated communities, as recommended in recently published Australian guidelines.15