Horizontal long-axis cardiac magnetic resonance image of the patient 10 minutes after injection with gadolinium, showing subepicardial-delayed enhancement in the apical and apicolateral walls of the left ventricle and the lateral wall of the right ventricle (arrows). 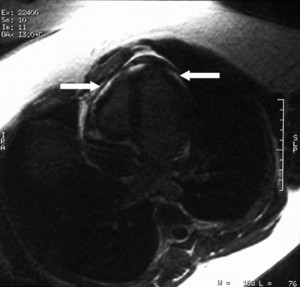 Chikungunya Virus–Induced Myopericarditis: Toward an Increase of Dilated Cardiomyopathy in Countries with Epidemics?

The acute stage of infection with chikungunya virus, which is characterized of fever, polyarthritis, and occasional rash, can be complicated by myocarditis, as reported in a 21-year-old woman. Persisting changes on cardiac magnetic resonance imaging one year after disease onset could lead to delayed myocardial damage. An unexpected delayed increase in dilated cardiomyopathy may be observed in countries affected by the outbreak of chikungunya virus disease during 2005–2007.

Chikungunya virus (CHIKV) is an arbovirus identified in the 1950s in Africa where its sylvatic cycle involves wild primates and forest-dwelling mosquitoes. It is also prevalent in Asian countries with an urban cycle involving Aedes aegypti without a known animal reservoir. The acute stage includes brief fever, headache, myalgia, occasional evanescent exanthema, and subacute bilateral and symmetric polyarthritis, followed by disabling rheumatism persisting for months.1 This virus is responsible for widespread disease outbreaks that have swept throughout the western Indian Ocean islands and Indian subcontinent within the past three years.2,3 Thus, by March 2006, on Reunion Island, one-third of the population was affected and the disease was associated with 237 deaths.

We report a case of travel-acquired myopericarditis caused by CHIKV. On Jan 18, 2006, acute fever, vomiting, rash, arthralgias involving more than 10 joint groups, and finger coldness developed in a 21-year-old woman traveling on Reunion Island. Three days later, she complained of prolonged chest pain. Physical examination did not show any cardiac abnormalities. Myopericarditis was diagnosed based on ST-segment elevation in the anteroseptal region on an electrocardiogram, an increase in the troponin I level to 11 μg/L, and minor pericardial effusion on transthoracic echocardiography. Initial cardiac magnetic resonance imaging (MRI) showed pericardial effusion and subepicardial delayed-enhancement in the apical and apicolateral walls of the left ventricle and the lateral wall of the right ventricle. Treatment with a high dose of aspirin led to rapid disappearance of chest pain and normalization of electrocardiographic results.

An enzyme-linked immunosorbent assay with serum collected 10 days after disease onset showed IgM antibodies to CHIKV. Other causes of infectious myopericarditis were ruled out because serologic results remained negative or not consistent with a recent infection. Sequential clinical, biologic, and morphologic follow-up was conducted during the first year after disease onset. One year after the acute episode of disease, the patient remained asymptomatic. A Holter electrocardiogram did not detect any arrhythmias or atrioventricular conduction abnormalities, but an MRI identified persisting subepicardial delayed-enhancement without segmental wall-motion abnormalities (Figure 1).

The patient was diagnosed with probable CHIV-induced myopericarditis because she fulfilled the following criteria: 1) clinical, biologic, and morphologic evidence of myocarditis; 2) serologic results consistent with recent a CHIKV infection; and 3) no evidence by serologic testing of a recent infection. We did not obtain an endomyocardial biopsy specimen to confirm the role of CHIKV because of the clinical status of the patient and because this procedure is dangerous and poorly sensitive for viral identification. Myopericarditis induced by CHIKV was reported in the 1970s,4 and a few cases have been recently observed in the Reunion outbreak.3 This condition could lead to dilated cardiomyopathy, as observed in other viral infections.5 This hypothesis is supported by the persistence of MRI cardiac changes in our patient, but must be confirmed by long-term follow-up.

Because diffuse chest myalgia and arthralgia are common in acute stage of chikungunya fever, CHIKV-induced myopericarditis without heart failure have been undoubtedly mis-diagnosed during the recent outbreaks which likely resulted in about 2–7 million infections.2,3 Thus, an unexpected increase in dilated cardiomyopathy may be observed in countries affected during the 2005–2007 outbreaks. Longitudinal surveys are required to detect such a delayed impact of CHIKV on local public health.