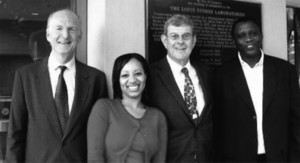 Defining and Defeating the Intolerable Burden of Malaria III. Progress and Perspectives

This is the third volume of scientific articles with “the intolerable burden of malaria” in the title that has been published as a supplement to the American Journal of Tropical Medicine and Hygiene since 2001. As for the first two supplements (2001, Volume 64 [supplement 1,2]:1–106; 2004, Volume 72 [supplement 2]:1–282), this volume “aims to provide new knowledge to strengthen the capacity of scientists and control workers and their institutions to address the burden of malaria through research and development of science-based policies and interventions in the malarious countries. Ultimately, this research and its application will result in elimination of malaria from Africa and other intransigent foci.”

Much progress has been made in research and control of the malaria scourge since 1997 when the Multilateral Initiative on Malaria (MIM) began as an international alliance of organizations and individuals concerned about the state of malaria research. In 1998, Roll Back Malaria, now the Global Malaria Programme, and the Roll Back Malaria Partnership began at the World Health Organization. Increasingly, research and control programs have focused on Africa where the overwhelming malaria burden occurs. One of the greatest benefits of these and other malaria initiatives has been the application of research findings to patient management and disease prevention. The development of sustainable malaria research and control programs, particularly in Africa, remains a top priority of many new efforts to combat malaria while raising international public awareness and attracting resources to combat this scourge. Among these many new partners joining the fight against malaria, the Bill & Melinda Gates Foundation, the Global Fund Against HIV/AIDS, Tuberculosis, and Malaria and the U.S. President’s Malaria Initiative have contributed funds, expertise and leadership.

We are grateful to the Fogarty International Center (FIC), National Institutes of Health (NIH), for serving as the Secretariat for this publication. The FIC “promotes and supports scientific discovery internationally and mobilizes resources to reduce disparities in global health,” is a MIM founding partner, and served as the MIM Secretariat from 1999 to 2002. The Disease Control Priorities Project (DCPP), whose Secretariat was also at the FIC, supported this supplement materially and in kind. The aim of DCPP is “to assess disease control priorities and produce science-based analyses and resource materials to inform health policy-making in developing countries.”

We thank the following agencies and organizations for their generous financial support that enabled the supplement’s publication and distribution: Sponsors of “Defining and Defeating the Intolerable Burden of Malaria III. Progress and Perspectives” through the Foundation for the National Institutes of Health are the Bill & Melinda Gates Foundation; the Burroughs Wellcome Fund; GlaxoSmithKline (premier sponsor); and the Special Programme for Research and Training in Tropical Diseases, World Health Organization (TDR/ WHO). These four organizations, along with the Global Malaria Programme and Roll Back Malaria Department, WHO; the Malaria Vaccine Initiative at the Program for Appropriate Technology in Health (PATH); the Rockefeller Foundation; the Swiss Agency for Development and Cooperation; the United Nations Foundation; the Wellcome Trust; and the World Health Organization Regional Office for Africa (WHO AFRO) provided grants to the Foundation for past malaria burden supplements. Their support helps make this publication possible.

Major encouragement, guidance and assistance in highlighting the malaria burden and in mobilizing resources for disseminating this supplement were given by Roger Glass, Mark Miller, Richard Miller, Timothy Tosten, and Lauren Sikes of the FIC and Amy McGuire Porter and Juli Staiano of the Foundation for NIH. Special appreciation goes to James Kazura, editor, Cathi Siegel, Managing Editor, Laura Buckley, Editorial Assistant, staff of the American Journal of Tropical Medicine and Hygiene, and Carolyn Bowers, production editor who have fully supported publication of this and previous malaria burden supplements in a wise, cheerful, and efficient manner. We owe special thanks to Cherice Holloway of the FIC, NIH, for her superb organizational, administrative, and interpersonal skills in keeping this publication on track as Managing Editor of the supplement.

Some of the information in this supplement was presented during a symposium entitled, “Defining the Intolerable Burden of Malaria: Progress and Perspectives, Point–Counterpoint,” at the Fourth Pan African MIM Conference in Yaoundé, Cameroon, held November 16, 2005.