Edematous form of Mycobacterium ulcerans disease over forehead and upper face. This figure appears in color at www.ajtmh.org.

Patient one year after discharge. There is no evidence of relapse. This figure appears in color at www.ajtmh.org. 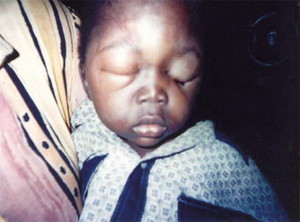 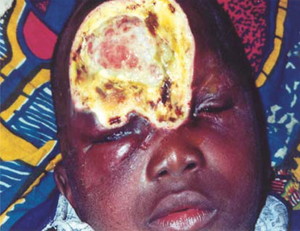 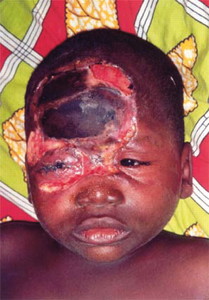 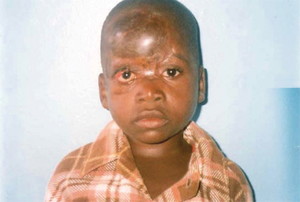 We report a case of a four-year-old Angolan boy with the edematous form of Buruli ulcer on the face and scalp, who was treated at a rural hospital in the Bas-Congo Province, Democratic Republic of Congo. Treatment consisted of a series of surgical interventions and antimycobacterial chemotherapy (rifampin and ciprofloxacin) for two months. This case demonstrates the diagnostic and management difficulties of an edematous lesion of BU on the face and suggests an enhancement of healing and limitation of extent of excision by specific antibiotherapy. The outcome in this patient also underscores the importance of prompt referral of suspected cases and training of health professionals in the early diagnosis of BU.

Buruli ulcer (BU) is a severe disabling and disfiguring disease caused by Mycobacterium ulcerans. Its affects primarily children less than 15 years of age in many tropical and subtropical countries.1–3 In early or preulcerative lesions, M. ulcerans produces a lipid toxin, mycolactone, which is responsible for necrosis of the dermis, panniculus, and fascia, culminating in extensive ulcers.4 Preulcerative lesions and small ulcers may be surgically excised and closed. However, antimicrobial drug therapy is often effective for treatment of early lesions.5 Large ulcers or extensive edematous lesions generally require excision followed by skin grafting.6

The Bas-Congo Province of the Democratic Republic of Congo is endemic for BU and the disease is generally under-diagnosed in this region.7–9 In the surgical ward of the Institut Médical Evangélique Hospital at Kimpese, BU patients are regularly admitted, more than 90% are in an advanced stage of the disease. As required by the Medical Committee of Institut Médical Evangélique, all patients or their responsible relative or guardian must provide informed consent for all diagnostic and treatment procedures and publication of any or all images derived from the management of the patient, including clinical photographs that might reveal patient identity. We report the diagnostic and management difficulties in a patient with an edematous form of BU localized to the face and scalp.

A four-year-old Angolan boy from a refugee camp in Mpete, Democratic Republic of Congo, was admitted to the Institut Médical Evangélique Hospital on September 3, 2002, with facial edema that began two weeks earlier with painless swelling of the eyelids (Figure 1). He had no history of trauma or insect bite and his temperature was normal. Various clinical features and types of treatment given over the observation period are shown in Table 1. Several antibiotic regimens were administered: oral ampicillin, and topical chloramphenicol ointment, followed by chloramphenicol and gentamicin, and chloramphenicol, gentamicin, indomethacin, and dexamethasone. Three weeks after admission, a diagnosis of M. ulcerans infection was suspected, but the results of a superficial skin biopsy proved nonspecific.

On October 11, 2002, the skin on his forehead ulcerated and a diagnosis of BU was confirmed by the detection of numerous acid-fast bacilli in the necrotic base of the ulcer. On October 22, 2002, necrotic tissue was excised under general anesthesia. Results of a polymerase chain reaction and culture were positive for M. ulcerans, and histopathologic examination showed extensive coagulation necrosis of the deep tissue, vasculitis with thrombosis, numerous foci of mineralization, and areas of acute inflammation. There were clusters of acid-fast bacilli deep in the panniculus. Thus, active BU was confirmed by all four tests recommended by the World Health Organization.1

Ulceration that extended to the right eyelid and base of the nose (Figure 2) was treated by four surgical interventions, daily wound dressing, and skin grafts. In December 2002, lagophthalmos, upper eyelid ectropion, dacryocystitis, and a right periorbital active BU lesion developed after the first skin graft.

Beginning on November 11, 2002, rifampin was given for two months in combination with ciprofloxacin to limit extension of the disease to the eyeball (Figure 3). The edema resolved and ulcerative lesions healed rapidly during this period.

On January 12, 2003 a fourth excision was performed with limited debridement of residual periorbital lesions after skin grafting. On February 28, 2003, a central tarsorrhaphy, followed by plastic surgery of the superior eyelid, was performed. Results of these procedures were acceptable with minimal scar formation. In March 2003, the patient was discharged from the hospital after 195 days and there was no relapse at a one year follow-up (Figure 4).

Foci endemic for BU are most frequent in remote rural areas where there is limited access to adequate health care facilities for treatment of this disease. The indolent course of BU commonly results in patients seeking appropriate medical care only as a last resort, by which time the disease has often reached an advanced edematous or ulcerative stage.

Our patient was referred from an Angolan refugee clinic for edema of the face that developed spontaneously without a known history of insect bite, trauma, fever or pain.10 The differential diagnosis of edematous BU includes cutaneous cellulitis, edema from underlying osteomyelitis, systemic diseases (e.g., renal or cardiac failure), malnutrition, traumatic edema, Kaposi’s sarcoma, or lymphatic obstruction.

Our patient had been living in Bas-Congo for three years. He frequently accompanied his mother to a field near Kasi village, a well-known BU-endemic area.9,11 His parents had a fatalistic attitude, believing that the illness had a mystical origin and was the result of a bewitching, currently called “Mbasu” in Kikongo.12 Belief in a supernatural origin of BU has been reported by several investigators in other African countries.13,14 We frequently organize health education sessions to help BU patients and their families to better understand the nature of the disease.7

Diagnosis of BU in our patient was initially tentative because of the rarity of patients with the edematous nonulcerative form of BU, particularly diffuse edema of the face, who came to our hospital. Approximately one month after admission, a weeping erythematous preulcerative lesion appeared in the center of his forehead, from which a punch biopsy specimen (3 mm) was obtained. It is recommended that specimens for laboratory confirmation from nonulcerative forms (papules, nodules, plaques, and edematous forms) should be taken from the center of the surgically excised tissue and should include the entire thickness of infected tissue.1 Fine-needle aspiration was recently proposed as an alternative to punch biopsies because it does not require local anesthesia (Eddyani M and others, unpublished data).

Until recently, the only effective treatment of BU was surgical excision of the affected tissue.1,16 As early as 1950, an edematous form of BU on the eyelid of a four-year-old child was diagnosed in eastern Democratic Republic of Congo.3 The difficulties encountered in treating such cases and the need to be surgically conservative were emphasized.3 In the 1960s, some investigators noted healing of early lesions of BU after treatment with antibiotics.17 A number of well-documented cases of early lesions at our hospital in 1970 were treated successfully with rifampin (Meyers WM, unpublished data). The Global Buruli Ulcer Initiative has recently recommended the initial use of conservative treatment, particularly when lesions are located on the face, breast, and genitalia. The suggested approach is to treat the patient with antibiotics (rifampin and streptomycin) for eight weeks, with only debridement and dressings before surgery.16

Our patient had two surgical excisions before antibiotic treatment was initiated. Additional excisions were performed after three and eight weeks of antibiotherapy. However, in addition to surgery, the adjunctive medical treatment may have facilitated healing of our patient; the edema resolved and the ulcerative lesions healed rapidly during treatment and only limited debridements were required. For lesions involving the eye, clinicians may consider initial specific antibiotherapy for preulcerative lesions to promote early healing and to avoid ocular complications.

In conclusion, this case report demonstrates the diagnostic and management difficulties of the edematous form of BU on the face and suggests the possible benefit of specific antibiotherapy to enhance healing and limit the extent of surgical excisions. Our observations highlight the importance of this clinical presentation of BU and the need for health workers managing BU lesions of the head and neck to be aware of the special challenges these lesions present. Ophthalmologists, ear, nose, and throat specialists, and plastic surgeons should take special note. Prompt referral of suspected BU cases and the training of the staff at both the peripheral level and health professionals at regional hospitals in the early diagnosis of BU are of utmost importance. Finally, all clinicians treating BU patients should stay well informed of developments in the antimicrobial treatment of BU, an apparently fast-moving area of research.

Chronology of the clinical features and treatment of the patient