Posterior mean with 95% CI for odds ratios of each combination treatment with respect to combination SP + AS3 (dotted line) for ACPR at day 28 PCR corrected. 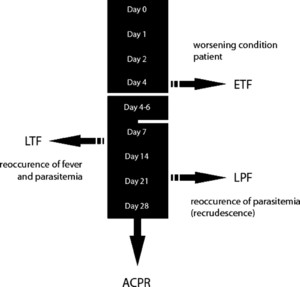 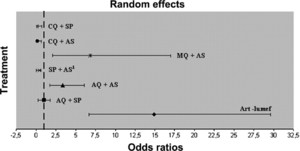 Over the years, multiple articles on Artemisinin-based Combination Therapies (ACTs) were published, highlighting the relative advantages or drawbacks of these combinations. Many studies were comparative. Because none of the studies compare all combinations and methodology varies between studies, there is no homogeneity. A multi-treatment Bayesian random-effects meta-analysis was designed to assess the relative effect of each combination therapy to artesunate + sulfadoxine-pyrimethamine (4 mg/kg/day for 3 days). By far the most attractive result for the variable adequate clinical and parasitological response at day 28 PCR corrected is given by the combination artemether-lumefantrine. Annual follow-up on the data published is intended to reveal the changes in the relative drug efficacy values of ACTs.

Although resistance to artemether and artesunate is unlikely to occur in view of its complex chemical attack on malaria parasites, in 2001 the World Health Organization (WHO) issued a general recommendation to combine artesunate or artemether monotherapy with another antimalarial drug that has a different mechanism of action than that of the artemisinins.1 The reason behind this recommendation was simple—the probability of selecting parasites that would be resistant to both drugs at the same time could be avoided or significantly delayed. Additional reasons in favor of such a combination therapy are the significant shortening of treatment duration and hence improvement of patient compliance and the advantage of a plurality of drugs that can be used. Several Artemisinin-based Combination Therapies (ACTs) have been put forward. Recommended partner drugs are lumefantrine, combined with artemether in a fixed-dose combination known as Coartem®, mefloquine, pyronaridine, lap-dap (chlorproguanil + dapsone), long-acting sulfonamide (sulfadoxine/sulfamethoxypyrazine) with pyrimethamine, amodiaquine, and piperaquine. The latter products are combined with artesunate except for piperaquine, which is combined with dihydroartemisinin. In 2001, when ACTs were introduced and promoted, hardly any drug fulfilling the criteria was available, apart from Coartem®. In Southeast Asia the combination artesunate with mefloquine was being studied and the other combinations (with sulfadoxine-pyrimethamine, lumefantrine, and piperaquine, etc.) arose progressively, mainly as a co-blister pack containing the artemisinin derivative with one partner drug. Pharmaceutical and clinical development was being investigated for all the combinations. It would therefore take quite a few years before the various combinations would become available, in particular for the fixed-dose combinations where all active ingredients are present in a single tablet.1,2

Over the years clinical research was done by many centers in various countries in distinct geographical areas with different endemicity of malaria and with varying resistance patterns of the parasites. Most studies focused on malaria in children under 5 years of age, whereas other studies did not make this distinction. In addition most studies were comparative, but the comparative ACT drug and the dose could vary between studies. In summary, not much homogeneity existed between the various studies. A well-based interpretation of the results was therefore not easy. An appropriate statistical approach to this problem was required and the opportunity to use a non-classic type of meta-analysis should be used to provide the necessary tool.

PubMed was used to retrieve all papers published until October 2005 that contained the keywords “artesunate and combination,” “artemether and combination,” “artesunate combination therapy,” or “artesunate amodiaquine combination.” Papers were included only when they pertained to a randomized, controlled clinical trial and if they evaluated the clinical efficacy of either of the following combination therapies: artemether-lumefantrine (Art-lumef), amodiaquine (AQ) + sulfadoxine-pyrimethamine (SP), AQ + artesunate (AS), SP + AS, mefloquine (MQ) + AS, chloroquine (CQ) + AS, and CQ + SP or if they compared the clinical efficacy of different combinations for treatment of uncomplicated P. falciparum malaria.

Clinical trials studying the efficacy of uncommonly used combination therapies like AS + fosmidomycin, AS + dapsone/proguanil, AS + clindamycin, and dihydroartemisinin + napthoquine/trimethoprim were omitted from the analysis to avoid computational problems in the meta-analysis.

Recurrent parasitemia after day 7, as in LTF or LPF, is caused by recrudescence of the original parasite infection or by a re-infection with a new parasite. Because re-infection cannot be considered a treatment failure, it is important to differentiate recrudescence from re-infection if we want to evaluate the efficacy of an antimalarial drug. This differentiation is done by PCR genotyping of the P. falciparum merozoite surface protein 1 (msp1), merozoite surface protein 2 (msp2), and/or glutamate rich protein (glurp) of the parasite in blood samples taken on day of study enrollment and the day of treatment failure. The analysis is followed by gel separation of the obtained PCR DNA fragments. In case of reinfections two different loans for the parasite DNA fragments of day of enrollment and the parasite DNA fragments of the day of treatment failure are obtained on the agarose gel. In case of recrudescence the two loans are the same. All reinfections are considered to be treatment successes and therefore the ACPR rates are corrected.

The effect of the study is considered to be random to express that the baseline risk differs from study to study because the studies differ in inclusion and exclusion criteria, were executed in different geographical areas, etc. The distribution for the study effect was assumed to be: α1, . , αI ~ N(0,σ2).

The study-specific treatment effects were also considered as random to express our prior belief that the different studies have different protocols such as different patient populations to examine, thereby showing extra variability for the effect of the jth treatment. That is, we assumed here that βj ~ N(γj,τj2), γj is the population mean, and τj2 is the population variance of the jth treatment effect. Because of sample size limitations, it was assumed that τl2 = · · · = τJ2 = τ2. The model specification was completed by assuming the following prior distributions: γ1, . , γJ ~ N(0,106), σ−2~γ (0.5, 0.0001), and τ−2 ~ γ (0.5, 0.001).

This software is based on the Bayesian paradigm; therefore our approach is called the multi-treatment Bayesian random-effects meta-analysis.

Our approach yields the posterior mean for the odds ratio βj and the posterior standard deviation, which is an expression of the uncertainty on βj. Furthermore a 95% confidence interval (95% CI) for each combination therapy with respect to the control combination treatment is calculated.

Using the keywords as previously described, approximately 200 papers were obtained via PubMed. Applying the previous exclusion criteria, 32 papers remained (Tables 1 and 2). Each of the selected papers investigated the clinical efficacy of at least one antimalarial combination therapy and provided data on PCR-corrected ACPR at day 28. Fourteen of these papers were used in the Lancet meta-analysis of Adjuik and others6 and in the updated meta-analysis of Jansen and others (unpublished data) (Table 2). The data for these 14 papers was retrieved from the meta-analysis of Adjuik and others.6

In this article, we compare the combination therapies to the control treatment SP + AS3, but our approach easily provides the estimate of the odds ratios of the combination therapies to another control treatment. Posterior information for the OR (posterior mean, posterior standard deviation, and 95% CI) with PCR-corrected ACPR at day 28 as endpoint is given in Table 4.

Over the past 10 years multiple comparative studies on ACTs were published, highlighting the relative advantages or drawbacks of these combinations. However, because none of the studies compare all combinations and methodology varies between studies, it is not easy to see clear results in this vast amount of data produced. Therefore a multi-treatment random-effects meta-analysis was used to provide a tool for comparative assessment of various ACTs. In this study the clinical efficacy at day 28 was compared between commonly used combination therapies. Results show that the combination Art-Lumef has a higher clinical efficacy regarding PCR-corrected ACPR at day 28 than all other combinations, but is closely followed by As + MQ. The combinations As + AQ and As + SP are not necessarily inferior but their percentages of success at day 28 PCR corrected are very close to the threshold of 90%.

The value of a drug combination does not depend alone on day 28 PCR-corrected ACPR. Absence of recrudescence is too narrow to judge ACTs. Additional variables, like side effects, re-infection rates, gametocyte carriage, and even cost price and availability of the drug combination were also identified as important and should also be followed in the future.

Artemisinin-based Combination Therapies have consistently been shown to be highly effective, well tolerated, and safe except for AQ combinations, which have frequent side effects.2 The same may apply to the combinations with Lap-dap. Some uncertainty remains concerning the neurotoxicity of the currently deployed combination Art-lumef. Its safety profile should be reviewed.7

In 2005, Mutabingwa and others10 studied the effectiveness of Art-lumef in the high transmission and resistance area of North Tanzania. This study revealed a high re-infection rate of about 20% after treatment with Art-lumef. The same result was obtained in 2006 with a study in five sentinel sites in Zambia conducted by the National Malaria Control Center. They found re-infection rates fluctuating between 19.2% and 53.8% for Art-lumef.11

Because of this high re-infection rate of the recommended first-line treatment Art-lumef, in the future it would be useful to review the re-infection profile of some newly introduced ACTs like AS + sulfamethoxypyrazine-pyrimethamine (SMP) in fdc format.

Our multi-treatment Bayesian random-effects meta-analysis method permits us to follow the annual changes in the relative values of all the previously mentioned variables. A detailed evaluation of each ACT can be made based on data from the published literature. Currently Art-lumef is winning, but this picture may change when the calculations are updated to the data published in 2006–2007. 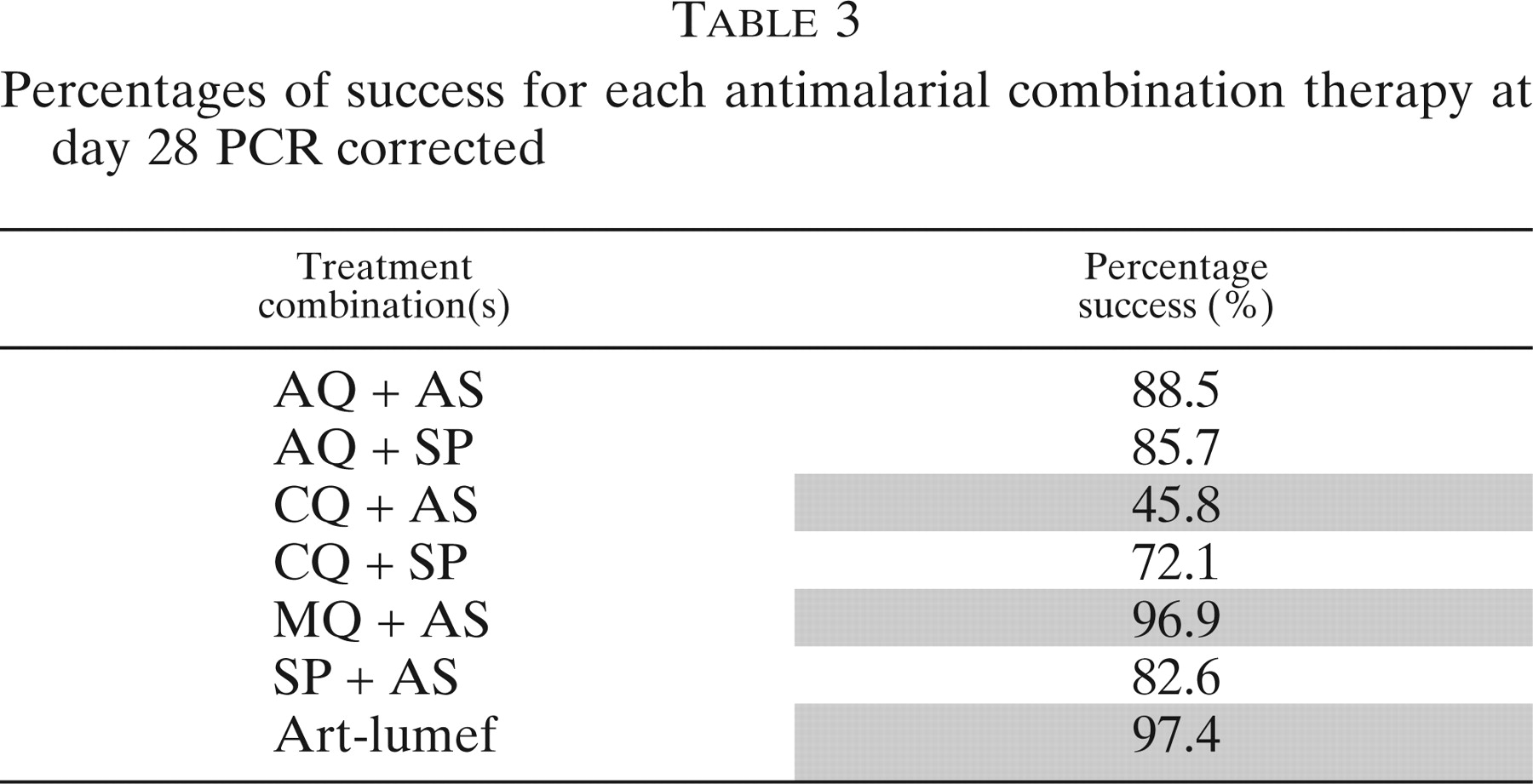 Posterior information for odds ratios of each combination treatment with respect to the combination of SP + AS, for ACPR at day 28 PCR corrected