Phylogenetic relations between 86 isolates of Bartonella from small mammals from Bangladesh based on sequence analysis of the partial citrate synthase (gltA) gene. Strict consensus tree constructed using maximum parsimony analysis in PAUP. Numbers in the central part of the tree are GenBank accession numbers. Jackknife values are based on 500 simulations. Branches with no numbers had values of < 50.

Phylogram displaying similarity of some Bartonella isolates from B. bengalensis and R. rattus from Bangladesh with Bartonella strains obtained from rats in France, Portugal, and the United States and with B. elizabethae from a human patient from Massachusetts. Branch length is proportional to the number of nucleotide changes in the gltA fragment. Known Bartonella species and reference strains are in bold, following is the geographic origin of the strain. GenBank accession numbers are given in parentheses. 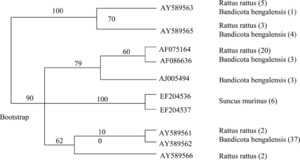 Bartonella Strains in Small Mammals from Dhaka, Bangladesh, Related to Bartonella in America and Europe

Ecological and bacteriologic observations of small mammals captured in Dhaka, Bangladesh, indicated that Bartonella infections occurred in high prevalence among lesser bandicoot rats (Bandicota bengalensis), black rats (Rattus rattus), and house shrews (Suncus murinus). Sequence analysis of the citrate synthase gene of Bartonella isolates showed that small mammals in Bangladesh harbored a diverse assemblage of strains. Some cultures were genetically related to Bartonella elizabethae, a species identified from a human patient in the United States. Sequences of some other cultures from Bandicota and Rattus rats were identical to sequences of cultures from domestic rats in France, Portugal, and the United States. The finding of Bartonella species in a high proportion of the mammalian samples from Dhaka suggests the need to study whether these agents might be responsible for human cases of febrile illness of unknown etiology in Bangladesh and elsewhere in south Asia.

The genus Bartonella includes a variety of genetically related gram-negative bacteria that parasitize red blood cells and endothelial cells of their mammalian hosts.1 Interest in Bartonella species has been increasing with the recognition of several novel or re-emerging diseases caused by these pathogens. These illnesses can range from a short-term fever that resolves quickly on its own to potentially fatal diseases with cardiovascular, nervous system, or hepatosplenic involvement.2,3 Bartonella infections are widespread and highly prevalent in rodents of different geographic regions, including Asia. Recent studies have shown that Bartonella were widely distributed among rodents in southern China4 and Thailand5; however, none of these studies have targeted populations of urban and peridomestic rodents from any Asian metropolitan area. Also, to our knowledge, no study of Bartonella has been conducted in Bangladesh or other neighboring countries in southern Asia. The high prevalence of these bacteria in rats in some Asian countries and the close contact of people with rats and their fleas in the peridomestic environment suggests that rat-borne Bartonella may be responsible for a proportion of illnesses of unknown etiology in Bangladesh.

The objectives of this study were 1) to investigate the prevalence of Bartonella infections among small mammals in an urban slum in Dhaka; 2) to evaluate the diversity of the Bartonella bacterial community by analyzing partial sequence of citrate synthase gene (gltA); and 3) to compare Bartonella strains obtained from rodents in Bangladesh with the strains obtained in other countries.

Small mammals were collected from sites within the study area of an ongoing human febrile illness surveillance project in Kamalapur, a low socioeconomic residential area in the southeastern quadrant of Dhaka, Bangladesh. The study area was divided into seven geographic strata, and the intention was to collect ~20–30 small mammals from each stratum for a total sample size of ~200 subjects. Locally constructed live-capture traps baited with dried fish were placed in or around structures in each stratum; the majority of these structures (278 of 286 total sites) were dwellings; eight sites were other types of premises, including food establishments. Trapping was conducted from June through August 2003. A total of 201 small mammals were trapped during 895 attempted trap-nights.

Collection of samples from small mammals was conducted in compliance with the Animal Welfare Act and other federal statutes and regulations relating to animals and experiments involving animals and adheres to principles stated in the Guide for the Care and Use of Laboratory Animals (NRC Publication). The study protocol was approved by the Animal Experimentation Ethics Committee at the ICDDR, B: Center for Health and Population Research in Dhaka, Bangladesh, and by the Animal Care and Use Committee, Division of Vector-Borne Infectious Diseases, Centers for Disease Control and Prevention, Fort Collins, CO.

Trapped animals were transported to the laboratory, where they were anesthetized and visually inspected to identify species. Blood samples were collected by cardiocentesis. After collection of blood, the animals were humanely euthanized without regaining consciousness. Whole blood was frozen at −20°C for < 2 days and stored at −70°C before shipment on dry ice to CDC laboratory in Fort Collins, CO.

Details of procedures used for isolation of Bartonella bacteria from mammalian blood have been described previously.6 Frozen whole blood was thawed and diluted 1:4 in brain heart infusion media containing 5% fungizone (Amphotericin B). The fungizone was added to diminish fungal overgrowth that can occur on plates before the growth of fastidious Bartonella colonies. Diluted blood (0.1 mL) was pipetted onto heart infusion agar plates containing 5% rabbit blood. Plates were incubated aerobically at 35°C in 5% CO2 for up to 4 weeks. Plates were monitored for bacterial growth at least once per week after initial plating. Bacterial colonies were tentatively identified as Bartonella species based on colony morphology and microscopic examination. Each isolate was collected after at least two passages. Single colonies were harvested from initial plates and from subsequent passages; passages were continued until a pure culture, free from contamination, was obtained. Colonies were harvested by adding 5 mL of BHI plus 10% glycerol to each plate, gently scraping the layer of bacteria from the surface of the agar plate, and storing the material into individual polypropylene freezer vials.

Bartonella isolates were confirmed by polymerase chain reaction (PCR) amplification of a region of the citrate synthase (gltA) gene followed by sequencing the resulting amplicon. DNA extractions were performed on whole bacterial cells using a Qiagen DNA extraction kit (Qiagen, Chasworth, CA). Each PCR was conducted in a PTC 200 Peltier Thermal cycler (MJ Research, Waltham, MA) using the following program parameters: initial denaturing at 95°C for 5 minutes and 95°C for 1 minute, 56°C for 1 minute, 72°C for 1 minute, and repeat steps 2–4 for an additional 34 cycles. PCR products were analyzed for the presence of amplicons of the correct size by electrophoresis in 1.5% agar gels containing ethidium bromide.

Amplicons of the proper size were purified using a QIAquick PCR Purification Kit (Qiagen) followed by CEQ DTCS-Quick Start kit and Qiagen DyeEx 2.0 Spin Kit. Cycle parameters for the sequencing reactions were 96°C for 30 s, 55°C for 1 minute, 65°C for 2 minutes, and each step was repeated for 39 additional cycles. Sequences were analyzed using Lasergene (DNASTAR, Madison, WI) sequence analysis software to determine consensus sequences for the amplified region of the gltA gene. Unique sequences obtained in this study were submitted to GenBank, and accession numbers were assigned. The Clustal V program within Megalign (DNASTAR) was used to align and compare homologous Bartonella gltA sequences from this study and from the Gen-Bank database. The resulting alignment was analyzed using the PAUP software program for parsimony analysis (Center for Biodiversity, Illinois Natural History Survey, Champaign, IL).

Prevalence of Bartonella infection by species of mammals.

Based on nucleotide and amino acid sequence analyses the 10 identified gltA variants form three distinct clusters (Figure 1). The first cluster combined isolates that are close or identical to Bartonella elizabethae. This group predominantly consisted of sequences of isolates obtained from BB (37), but also contained isolates from RR (4), and all isolates from SM (6). Although there were 5-bp differences among nucleotide sequences within this group, peptide sequences revealed a single amino acid difference or no differences between the isolates. In fact, variants AY589561, AY589562, and EF204537 were identical to B. elizabethae by peptide sequence analysis. Interestingly, all six Bartonella sequences obtained from SM were close to each other by nucleotide analysis and different from all other sequences that were found in Bangladesh or elsewhere. The second cluster comprised isolates that are close or identical to Bartonella tribocorum. A single base pair difference was present between AF075164 and AF086636 and AJ005494, but no differences in amino acids sequences were observed. In this group, 20 sequences were from RR isolates and three sequences were from BB isolates. The third cluster consisted of a group of seven identical sequences (AY589565: four from BB and three from RR) and another group of six identical sequences (AY589563: five from RR and one from BB). Although there were 5-bp differences between the nucleotide sequences, as above, there was no difference between amino acids sequences within the third cluster.

Similarity between some Bartonella isolates obtained from rats collected in Bangladesh and Bartonella from rats in Europe and the United States.

The most intriguing results of the study were the discoveries that many rats in Dhaka were infected with a large number of Bartonella strains that are genetically related or identical to homologous sequences of Bartonella strains that were previously found in France, Portugal, and in the United States.9,10 The human pathogen, B. elizabethae also belongs to this phylogenetic lineage.7 Childs and others13 and Ellis and others9 hypothesized an Old World origin for the group of bacteria that include B. elizabethae. A possible explanation for our findings is that this bacterium could have spread from Asia to other parts of the world through infected rats traveling by ship. Most cultures obtained from B. bengalensis in Dhaka (79%) were genetically related to B. elizabethae. This identifies a potential risk for delivery of this Bartonella species from one continent to another as their vertebrate reservoir has been introduced throughout the world. The results also suggest that Bartonella infections could serve as ecological markers to retrospectively describe the dispersion of rats from their original center.

Findings of a high proportion of domestic rats infected with B. elizabethae–related bacteria in Bangladesh raise potential public health concerns of humans acquiring the Bartonella infection and the need to study whether these agents are responsible for cases of endocarditis and unknown febrile illnesses in this country and in other countries of South Asia.

Prevalence of Bartonella infections in small mammals from Dhaka, Bangladesh