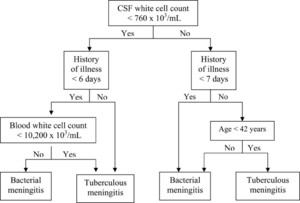 Validation of a Diagnostic Algorithm for Adult Tuberculous Meningitis

Tuberculous meningitis (TBM) remains difficult to diagnose. We prospectively evaluated a diagnostic algorithm for TBM in 205 HIV-negative patients with meningitis and a low CSF glucose. Patients were classified as having TBM or bacterial meningitis (BM) by two diagnostic methods: logistic regression method (LRM) and classification and regression tree (CART). We performed analyses of TBM versus BM and TBM versus non-TBM in all patients and in patients with microbiologically confirmed diagnoses. Diagnostic sensitivities for TBM were 99% (LRM) and 87% (CART). For BM, diagnostic sensitivities were 81.5% (LRM) and 86.5% (CART) in the primary analysis and 86.5% (LRM) and 74% (CART) in the secondary analysis. In microbiologically confirmed cases, similar rates were achieved. These figures are superior to microbiological confirmation rates in routine laboratories and support the use of this algorithm in high-prevalence TB settings with limited diagnostic facilities. Validation in an HIV-endemic setting is required.

Tuberculous meningitis (TBM) is the most severe form of tuberculosis, causing death or disability in more than half of those affected, despite antituberculous chemotherapy.1,2 Prompt diagnosis is crucial as delayed treatment is known to be associated with poor outcome.3–7 The clinical features of TBM mimic those of other chronic meningoencephalitides, causing considerable diagnostic difficulty.8 Laboratory confirmation relies on the demonstration of acid-fast bacilli, which requires expertise, or culture of Mycobacterium tuberculosis in the cerebrospinal fluid (CSF), which is time consuming.9,10 However, TBM frequently occurs in settings with limited laboratory facilities. We have previously developed a diagnostic algorithm for TBM based on clinical and laboratory features that would be ideal for use in resource limited settings.11 This has recently been assessed in a retrospective study of HIV-seronegative patients, in whom the diagnosis was predominantly bacterial meningitis (BM).12 We now report the evaluation of the diagnostic algorithm in > 200 patients admitted with meningitis to our hospital.

All patients who entered the study were admitted to the Clinical Research Unit at the Hospital for Tropical Diseases, Ho Chi Minh City, Vietnam. The Unit is a 15-bed ward that focuses on research into central nervous system infections. All adult patients (≥ 15 years of age) who presented with clinical meningitis and a low CSF to blood glucose ratio (defined as CSF glucose < 50% of blood glucose) were eligible to enter the study. All patients were seronegative for HIV-1 infection; 205 patients were enrolled between 31 May 2002 and 21 May 2004.

Verbal consent was obtained from the patient or their relative. All patients underwent clinical assessment and had blood drawn for routine hematological and bio-chemical investigations. A lumbar puncture was performed, and the CSF cell count and protein and glucose concentrations were determined by standard methods. CSF was centrifuged, and a portion of the deposit was examined by Gram, India ink, and Ziehl–Neelsen stains. The remaining deposit was cultured on blood and chocolate agar for pyogenic bacteria, and on Löwenstein–Jensen medium and in liquid 7H9 media (Mycobacterium Growth Indicator Tubes, Becton Dickinson Microbiology Systems, Sparks, MD) for mycobacteria. Patients also underwent chest radiography, and, if clinically indicated, a cranial computed tomography (CT) or magnetic resonance imaging (MRI) scan was performed. All data were recorded prospectively in individual case record forms and entered into a computer database. The study was approved by the Scientific and Ethical Committee of the Hospital for Tropical Diseases.

Patients were allocated a diagnosis of TBM or BM according to the two previously reported diagnostic methods: the logistic regression method (LRM) and the classification and regression tree method (CART). In the logistic regression model, the five factors that have previously been found to be independently associated with a diagnosis of TBM on admission to hospital (age, blood white cell count, history of illness, CSF white cell count, CSF neutrophil percentage) were used to derive a formula for a diagnostic index (Table 1). The total diagnostic index (DI) was calculated for each patient according to the following formula: DI = DI (age) + DI(blood WCC) + DI(history of illness) + DI(CSF white cell count) + DI(CSF % neutrophils). If the patient’s total diagnostic index was ≤ 4, they were classified as TBM; if the patient’s total DI was > 4, they were classified as BM. The admission diagnostic classification tree is illustrated in Figure 1. The results obtained by these two methods were compared with the discharge diagnosis of TBM or BM, which was based on previously defined diagnostic criteria (Table 2). A microbiological diagnosis of BM was defined as positive CSF Gram or acridine orange stain and/or positive CSF culture and/or blood culture for pyogenic bacteria. The microbiological diagnosis of TBM was defined as a positive CSF Ziehl–Neelsen stain and/or positive CSF culture for M. tuberculosis. The microbiological diagnosis of cryptococcal meningitis was defined as positive CSF india ink stain and/or positive CSF culture for Cryptococcus neoformans, and/or positive CSF or serum cryptococcal antigen by latex agglutination. A diagnosis of eosinophilic meningitis was made if the CSF had > 5% eosinophils and positive CSF serology for one or more causative pathogens, e.g. Angiostrongylus cantonensis, Toxocara canis, Gnathostoma sphingerum, or Cysticercus cellulosae.

Of 205 patients enrolled, because of missing data, we were able to classify 202 by LRM, and 204 by the classification tree method. We performed a primary analysis to determine the sensitivity, specificity, and positive and negative predictive values of the two methods for the diagnosis of TBM. The main comparator for this analysis was BM, which is the main differential diagnosis of meningitis with low CSF to blood glucose ratio seen in our practice. We performed a second analysis including all patients meeting the inclusion criteria on admission regardless of the discharge diagnosis. This was done to determine the sensitivity and specificity of both methods in a “real-life setting.” Finally, we performed a third analysis to determine the sensitivity and specificity of the two methods in patients with a microbiologically confirmed diagnosis. All analyses were performed using STATA, version 9 (StataCorp LP, College Station, TX).

Role of the funding source.

The funding source had no involvement in the study design, in the collection, analysis or interpretation of the data, writing of the report, or the decision to submit for publication. The corresponding author (M.E.T.) had full access to all data in the study and had final responsibility for the decision to submit for publication.

Comparison of the diagnosis using the LRM with the discharge diagnosis correctly identified 97% (76/77) of cases of TBM and 81.5% (84/103) of BM cases. One patient who was classified as having BM but who was diagnosed with TBM had values of all clinical parameters above the cut-off levels and a long history of illness. Among 19 patients who were classified with TBM but diagnosed with BM, none had all and 5 had none of 3 clinical parameters values above the cut-off levels. Fourteen patients had long history of illness, but for 7 of them it was equal to 6 days, the cut-off value. For 5 of those 7, this classified them into the TBM group; otherwise they would be classified with BM.

One hundred twenty-seven of 205 (62.0%) patients had a microbiologically confirmed diagnosis (Table 5). The most common diagnosis was bacterial meningitis (71 patients). On CSF examination, 43 patients had a positive Gram stain and 5 patients had a positive acridine orange stain; 52 patients were CSF culture positive for a bacterial pathogen. The most common bacterial isolate was Streptococcus suis (28 patients) followed by Streptococcus pneumoniae (11 patients). Other organisms isolated from the CSF included Klebsiella spp., Neisseria meningitidis, Escherichia coli, Proteus spp., Streptococcus bovis, and Streptococcus spp. Thirty patients with bacterial meningitis had the causative organism isolated from blood cultures. Forty-two patients had a confirmed diagnosis of tuberculous meningitis; 34 were smear-positive for acid-fast bacilli, and 32 were culture-positive for M. tuberculosis. Seven patients had eosinophilic meningitis with a raised CSF eosinophil count and positive serological tests for one or more of the following parasites: Angiostrongylus cantonensis, T. canis, G. sphingerum, or C. cellulosae. Six patients had cryptococcal meningitis, and all had positive results for CSF india ink stain, cryptococcal antigen latex agglutination test, and isolation of C. neoformans from the CSF. One patient had staphylococcal septicemia with Staphylococcus aureus isolated from blood cultures.

We have previously developed a diagnostic algorithm for TBM based on simple clinical and laboratory features that is suitable for use in resource-limited settings. This algorithm was developed using data collected from 357 patients and was tested on an additional 75 patients. We now report validation of this algorithm using prospectively collected data from a further 205 patients admitted to the same hospital. This study shows that the two diagnostic aids continue to perform well for the diagnosis of TBM with a sensitivity of 99% for the LRM and 87% for the classification tree method, in patients with confirmed TBM.

The sensitivity of the two methods was lower for the diagnosis of bacterial meningitis: 81.5% for the LRM and 86.5% for the classification tree method. However, these figures compare favorably to the isolation rates for M. tuberculosis or pyogenic bacteria from CSF in routine microbiology laboratories and would therefore support the use of this algorithm in settings with a high prevalence of tuberculosis where laboratory diagnostic facilities are limited.

When applied to all patients (including patients whose final diagnosis was not TBM or BM) the algorithm also performed reasonably well, although specificity decreased to 68% and 74%. One limitation of the study, however, is that ≈ 10% patients who have other diagnoses are erroneously classified as having TBM. Although this may not be critical for patients with viral or eosinophilic meningitis who may recover without specific treatment, the consequences may be dire for patients with cryptococcal meningitis, cerebral abscess, or staphylococcal septicemia who remain untreated. Although cryptococcal meningitis and staphylococcal septicemia can be relatively easily diagnosed by an adequately resourced laboratory, the diagnosis of cerebral abscess requires radiologic imaging.

We then assessed the performance of the diagnostic methods on patients who had a microbiologically confirmed diagnosis. Out of a total of 205 patients, 127 (62%) had a microbiologically confirmed diagnosis. Thirty patients were clinically diagnosed with bacterial meningitis despite negative CSF smears and cultures. Antibiotics are frequently administered prior to admission to our hospital, and this may account for negative culture results. Furthermore, some fastidious bacteria may be difficult to culture in the laboratory. For the patients who were diagnosed with TBM in the absence of positive smears or cultures, prior antibiotic therapy may also have played a role. Smear- and/or culture-negative TBM is a well-recognized clinical phenomenon, due to the paucibacillary nature of the disease and to the clumping of bacteria in clinical specimens. Five patients were diagnosed with viral meningitis based on clinical and CSF features alone; molecular diagnostic tests were not available at the time of the study. Three patients were diagnosed clinically and radiologically with a cerebral abscess, a condition in which CSF cultures are often nondiagnostic.

One final limitation of the current study was that it was carried out in HIV-uninfected patients. Thus, these results may not be applicable in geographical regions with a high HIV seroprevalence. Preliminary data from our ongoing studies of HIV-associated TBM suggest that the CSF parameters may differ considerably from those in HIV-negative patients. Furthermore, the spectrum of pathogens causing meningoencephalitis in HIV-infected individuals is broader. It is therefore crucial to validate this algorithm in HIV-infected patients prior to implementing it an HIV-endemic setting.

Performance of diagnostic methods in all patients

Performance of diagnostic methods in 127 patients with microbiologically confirmed diagnoses