Maximum likelihood phylogenetic tree of 117 envelope gene sequences of dengue 3 virus. The different genotypes of dengue 3 virus, as well as the Timor Leste isolates, are indicated. The tree is mid-point rooted for purposes of clarity only and all horizontal branch lengths are drawn to a scale of nucleotide substitutions per site. Bootstrap support values are shown only for key nodes.

Distribution of dengue cases and deaths from all districts by date of report, Timor-Leste, 2005. 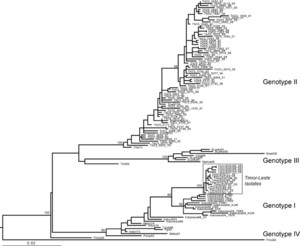 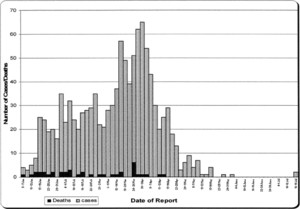 In response to a January 2005 report of dengue hemorrhagic fever (DHF) in Timor Leste, the World Health Organization sent a team to assist the National Hospital Guido Valadares (NHGV) in Dili with clinical case management and diagnostic support. The hospital reported 67 admissions including 8 deaths (case fatality rate approximately 12%) over the previous weeks with case histories clinically compatible with DHF. During the intervention, an additional 44 suspected dengue patients were admitted to the pediatric ward of NHGV. Among 41 patients with clinical diagnoses of dengue fever or DHF, 38 (93%) were laboratory confirmed. Although cause and effect cannot be definitely attributed, the case fatality rate decreased to 3.6% after the intervention with education about dengue management strategies.

Dengue virus (DENV) infections are a major public health problem throughout the tropics. Dengue fever (DF) and the more severe illness of dengue hemorrhagic fever (DHF), including dengue shock syndrome (DSS), are increasing.1 Dengue hemorrhagic fever was first reported in Jakarta, Indonesia in 1968. It has since been reported in all regions of Indonesia, including a 1998 epidemic of more than 58,000 cases. Timor-Leste, which is now separated from Indonesia, is highly endemic for dengue.2 All four serotypes of DENVs have been documented in Timor-Leste (population = 947,000) and every year cases of DF and DHF have been reported.3

Dengue fever is most often self-limited. Dengue hemorrhagic fever can result in a case fatality rate (CRF) as high as 20%, but with proper management CFR rates are less than 1%. We report on a 2005 outbreak in Timor-Leste where an initial CFR of greater than 12% decreased to 3.6% after clinical intervention, team assessments, education, and support.

On January 26, 2005, data on 67 hospitalized patients (82% less than 15 years of age), including 8 deaths with case histories compatible with DHF, were reported to the World Health Organization (WHO). A team from Queen Sirikit National Institute of Child Health WHO Collaborating Center in Bangkok, Thailand, was dispatched to help the National Hospital Guido Valadares (NHGV) in Dili, Timor Leste, with clinical management. The team planned the assignment into three periods: data gathering, intervention, and assessment.

The period of data gathering was January 29–31, 2005. Upon arrival there were an additional 8 suspected dengue cases, 6 possible dengue cases, one case of profound shock, and 2 deaths in the pediatric ward of NHGV. Review of the fatalities suggested that delays in diagnoses and inadequate monitoring of the suspected dengue patients appeared to be a significant factor in 8 of 10 deaths; the 2 other deaths were thought to be a result of fluid overload in attempting to manage shock.

The intervention period was February 1–12, 2005. A comprehensive plan for case management was implemented after discussions with officers from the Ministry of Public Health, WHO in Timor Leste, the director of NHGV, and teams of doctors and nurses who worked in the pediatric ward and outpatient department. Doctors were trained in making an early diagnosis and managing suspected dengue patients, nurses in monitoring patients and recognizing signs and symptoms of clinical deterioration, and laboratory technicians in obtaining hematocrits or packed cell volumes, white blood cell, differential, and platelet counts. Laboratory equipment (micro-centrifuge and microscope), medicines, and hyper-oncotic colloidal solutions, which were essential for DHF case management, were obtained.

Lectures on dengue diagnosis, WHO guidelines for the management of DF/DHF, and delineated job descriptions were given to 77 doctors, 34 nurses, and other healthcare personnel. The team provided hands-on training during ward rounds each morning with the physicians in the pediatric ward. Past cases were assessed through a morbidity and mortality conference. Finally, the team visited the largest private clinic in Dili to discuss outpatient management of suspected dengue and indications for referring to the hospital. A 24-hour telephone hotline consultation for dengue case management was established.

During the intervention period, 44 suspected dengue patients were admitted to the pediatric ward of NHGV. Among 41 patients whose clinical diagnoses met WHO case definition4 (except for a platelet count less than 100,000 because the test was done infrequently) for DF or DHF, 38 (93%) were laboratory confirmed at the U.S. Army Medical Component of the Armed Forces Institute of Medical Sciences in Bangkok, Thailand, by an IgM/IgG enzyme-linked immunosorbent assay as described by Innis and others5 and/or a nested reverse transcription–polymerase chain reaction (RT-PCR). Thirty cases were confirmed using acute-phase to convalescent-phase sera with a four-fold increase in IgG titer. Using IgM:IgG ratios > 1.8 and ≤ 1.8, 5 (16%) were diagnosed with primary (all ≥1 year of age) dengue infections and 25 (83%) with secondary dengue infections, respectively.

Dengue viral RNA was extracted from serum using TRizol (Gibco-BRL, Gaithersburg, MD) reagent and an RT-PCR was performed on each sample using the procedure described by Lanciotti and others with minor mondifications.6 The nested PCR products were examined by electrophoresis using standard methods. Viral RNA isolated directly from patient sera confirmed 25 cases by RT-PCR; 24 (96%) were DENV-3 and 1 DHF1 case was DENV-2.

All cases required administration of intravenous fluid, 7 DSS patients (18%) required colloidal solution, and 6 patients (16%) were transfused with whole blood. Thirty-three (87%) patients made a complete recovery, 2 (5%) had complications of fluid overload, and 3 died (CFR = 7.9%).

The envelope gene sequences of DENV-3 from the 14 cases were isolated, amplified, and sequenced using primers and procedures described.7,8 Maximum likelihood (ML) phylogenetic trees were estimated using the method implemented in the PAUP* package assuming the most general time-reversible + I + Γ4 model of nucleotide substitution.9 A neighbor-joining bootstrap resampling analysis (1,000 replications) was performed to assess the support for specific nodes, again utilizing the ML substitution model.

All Timor Leste viruses obtained clearly clustered within genotype I (and with strong bootstrap support) and were most closely related to strains obtained from Indonesia during the 1998 and 2004 epidemics (Figure 1). All sequences generated have been deposited at GenBank (accession nos. DQ453968–DQ453981).

The first outbreak of DHF in a region often results in a CFR as high as 15–20%. The CFR remains high until health care providers gain knowledge and experience treating DFH. In this outbreak, the initial CFR was approximately 12%. This high CFR rate was thought to be casued by late diagnoses that resulted in a delay in treatment and insufficient monitoring of patients. Dengue shock syndrome can be a difficult diagnosis because patients may look relatively well until rapid decompensation occurs.

Although cause and effect cannot be definitely assigned, simple interventions in case detection and management in this outbreak appeared to improve CFR. Training doctors and nurses in close monitoring of DHF/DSS patients is a critical step in reducing the CFR and guidelines are available.10,11 Equipment and intravenous supplies are needed to adequately monitor, diagnose, and treat patients properly. Finally, education of the community to be aware of the symptoms of dengue and the need to bring patients to the hospital early and return for follow up is important.

Leukopenia is common in dengue virus infections; however, the stress of shock may cause a leukocytosis. The availability and frequency of clinical laboratory testing and radiography will affect the ability to meet WHO criteria. A scarcity of resources can result in underestimation of DHF and make management more difficult. If the platelet count was strictly applied, only 15% of the laboratory-confirmed DHF cases would meet WHO criteria.

Why there were more females affected than males in this outbreak is unclear. The incidence of DSS was quite high (53%), probably because only the severe cases were admitted to the hospital. The clinical presentations and age distribution in this outbreak are similar to previous reports from southeast Asian countries endemic for dengue, and virologically the DENV-3 samples isolated were clearly related to those found in Indonesia during the 1998 and 2004 epidemics.