Study profile showing details of treatment with diethylcarbamazine (DEC) and placebo. Losses to follow-up were due mainly to participants’ wish to withdraw from the study or absence at follow-up. HIV+, HIV-positive individuals; CFA+, individuals positive for W. bancrofti CFA; CFA−, individuals negative for W. bancrofti CFA. *For HIV load analyses, only 5 were analyzed because the HIV RNA could not be amplified from 1 sample.

Individual HIV load levels in HIV-positive individuals with (CFA+) or without (CFA−) W. bancrofti co-infection at 12 and 24 weeks follow-up. The subfigure headings refer to the W. bancrofti infection status (CFA+ or CFA−) and the order in which DEC and placebo were given. In 1 sample from the CFA+ group, HIV RNA could not be amplified in PCR; therefore this sample was omitted from the HIV load analyses.

Effect of DEC treatment on HIV load (A), CD4% (B), and CD4/CD8 ratio (C) in the CFA+ and CFA− groups 12 weeks after treatment. Treatment effect is calculated according to the cross-over design as half the difference in the change over time between individuals receiving treatment in the order placebo–DEC and DEC–placebo. Vertical bars represent standard error. In 1 sample from the CFA+ group, HIV RNA could not be amplified in PCR; therefore this sample was omitted from the HIV load analyses (A). 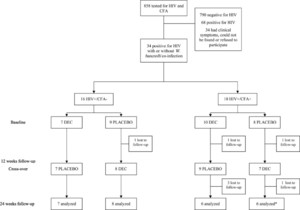 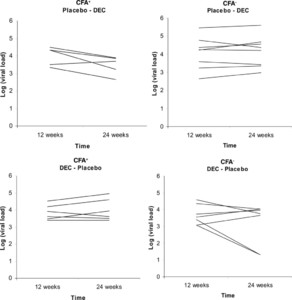 Effect of Diethylcarbamazine on HIV Load, CD4%, and CD4/CD8 Ratio in HIV-Infected Adult Tanzanians with or without Lymphatic Filariasis: Randomized Double-Blind and Placebo-Controlled Cross-Over Trial

We assessed the effect of anti-filarial treatment (diethylcarbamazine, DEC) on HIV load, CD4%, and CD4/CD8 ratio in HIV-positive individuals with and without infection with the filarial parasite Wuchereria bancrofti in a randomized, double-blind, placebo-controlled cross-over trial. The study was conducted in Tanga Region, Tanzania, in 2002 and involved 27 adults. A significant decrease in HIV load (54%) and an insignificant increase in CD4% were observed in the HIV-positive individuals with filarial co-infection at 12 weeks after treatment. HIV load and CD4% both increased, although not statistically significantly, in the HIV-positive individuals without filarial infection. The findings suggest that DEC affected HIV load through its effect on the filarial infection rather than through a direct (pharmacodynamic) effect on HIV. Global efforts to control lymphatic filariasis by annual mass treatment with DEC may have a beneficial effect on the HIV/AIDS epidemic in areas where HIV and lymphatic filariasis co-exist.