Graphic representation of the community studied within the Mexican Republic; locations of the 3 echinococcosis cases found in the community are shown with circles.

US images of the 3 cases of cystic echinococcosis found in the study. A unilocular cyst with its germinal layer, seen as a white floating membrane inside the cyst fluid, was found in the index case (A); a unilocular anechoic lesion was detected in the second case (B); and a unilocular lesion was observed in the right hepatic lobule with two densities—one anechoic and the other with internal echoes—and having the appearance of a snowflake; an irregular wall was also found in the third case (C). 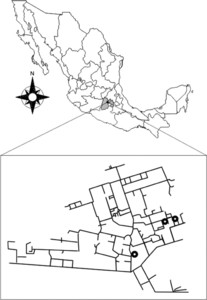 No epidemiologic study for cystic echinococcosis in México has yet been described. The objective of this work was to determine the prevalence and distribution of human echinococcosis in a community of the state of México and its probable risk factors. A cross-sectional study was performed; household census was used to randomly select houses. The larval stage of Echinococcus was searched by ultrasound in liver, spleen, and kidney. A questionnaire was used for the investigation of risk factors. The study was performed with 401 persons, 64% were female. The prevalence of echinococcosis was 0.75%. Cases were distributed in the same sector of the community. The close distribution of cases suggests the same exposure source. There were 426 dogs in the community; feces were collected from 414 of these in search of cestode eggs. After treatment, 3 dogs had Taenia pisiformis but none had Echinococcus. This paper pioneers the search of human echinococcosis in México because it provides evidence of the presence of this tissue parasite at the community level.