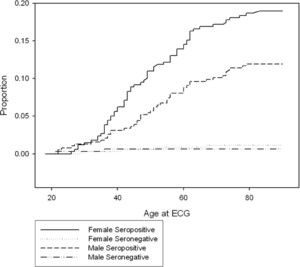 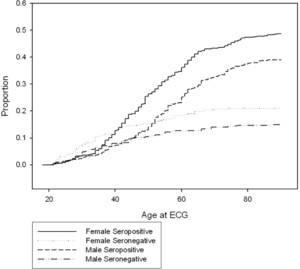 Chagas disease is the leading cause of heart disease in Latin America, affecting approximately 17 million people.1–4 Trypanosoma cruzi, the parasitic cause of Chagas disease, is transmitted to the human host by reduiivid bugs that live in the walls and roofs of houses in many rural areas of Latin America.5 There are no effective therapies for the chronic long-term phase of the disease and there are no vaccines or drugs to prevent infection with T. cruzi.

Substantial resources have been dedicated to eliminating the vector from household structures in Latin America. However, active transmission occurs in many areas,6–11 and between 100 and 120 million persons are considered to be at risk for infection with T. cruzi.2 Approximately 300,000 persons are newly infected each year2 and approximately 60% of those infected with T. cruzi will experience a long-term chronic disease characterized by highly variable cardiac outcomes, and less frequently by mega-colon and/or megaesophagus.5

The presence of active transmission combined with the current lack of vaccines or effective prophylactic drugs5,12–14 means that Chagas disease will remain a significant health burden and major economic drain in South America for the foreseeable future. In addition, Chagas disease is an emerging health threat in the United States and Canada, particularly in regions with large South and Central American immigrant populations.15–21

The cardiac form of Chagas disease is evidenced in electrocardiographic (ECG) data by conduction abnormalities that include bradyarrythmias, premature ventricular contractions, and bundle branch blocks, particularly right bundle branch blocks.5,22 Case-control studies have found that right bundle branch block, left anterior hemiblock, and atrio-ventricular blocks occur at a much higher frequency in seropositive persons than in seronegative persons.23–28 An elevated Q-T interval and T-wave axis deviation have both been implicated as predictive of mortality in patients with Chagas disease.29,30 Statistics indicate that more than half of those infected with T. cruzi can expect to progress to chronic Chagas disease and most will experience the cardiac form of the disease.5

There are few large-scale studies that have assessed ECG-related variables in populations in areas endemic for Chagas disease (however, see the study by Maguire and others28). The purpose of the current study was to assess the epidemiology of cardiac disease as shown by ECG characteristics in a population with high rates of infection with T. cruzi.

The study was conducted in Posse, a rural community in the state of Goiás, Brazil located approximately 350 km northeast of Brasilia, the capital of Brazil. The population consists primarily of subsistence farmers, most of whom were born in the municipality. The population is highly admixed and derived from European, African, and Amerindian ancestry.

Persons were recruited into the study through house-to-house sampling using a protocol that was reviewed and approved by the Institutional Review Boards of the University of Texas Health Science Center in San Antonio and the Rene Rachou Research Center of the Oswaldo Cruz Foundation in Belo Horizonte, Minas Gerais, Brazil. The sample is population based and includes all eligible adults in the sampling area who were willing to participate. The study was explained at each household and persons who elected to participate provided a consent form that was either signed or fingerprinted. A total of 1,389 persons were successfully recruited.

A 10-mL blood sample was collected into a red-top tube for assessment of seropositivity status. Samples were allowed to clot, and then were kept on wet ice until they were separated into serum and clot no more than eight hours after collection. Serum samples were then aliquotted and frozen in liquid nitrogen until transfer to the laboratories in Belo Horizonte and San Antonio on dry ice.

The ECGs were collected from all participants using the portable Marquette MAC5000 System (GE Medical Systems Information Technologies, Milwaukee, WI). In addition to the automated quantitative data output by the machine, qualitative ECG variables were verified by a clinical cardiologist experienced in the treatment of Chagas disease.

For the quantitative ECG traits, statistical analysis using a linear model was performed to test for differences between seropositive and seronegative persons. All analyses were performed simultaneously adjusting for the effects of several covariates including sex, age, age2, sex × age, and sex × age2. Results are provided both as the covariate-adjusted means for seropositive and seronegative persons and as standardized differences measured in standard deviation units. The latter index allows for easier comparison across variables and provides a measure of the biologic importance of a given statistical difference. Because the data set consists of large numbers of related persons, we explicitly allowed for kinship-based non-independence by performing all analyses conditional upon the known pedigree structure. Non-independence was modeled through a familiality parameter that was treated as a nuisance parameter given that the focus of the current report is on the changes in mean effects induced by T. cruzi infection. Dichotomous discrete ECG variables such as bundle branch abnormalities were similarly analyzed using a probit regression model allowing for non-independence due to kinship. The program SOLAR,31 which enables arbitrary modeling of mean effects in the presence of structured non-independence, was used for all statistical analyses.

A number of traits were determined from the ECG readings. Quantitative intervals were determined directly from the ECG. The quantitative intervals evaluated included the QRS interval, the QT interval, and the PR interval. The mean values for each interval in seropositive and seronegative persons are shown in Table 1. Also shown is the difference in standard deviation units between seropositive and seronegative persons.

We also assessed the frequency of a variety of qualitative Chagas disease–related traits in seropositive and seronegative persons. These traits are shown in Table 2. As is the case with the quantitative ECG measures, there were significant differences between persons who were seropositive for T. cruzi infection and uninfected persons.

Other conduction abnormalities are altered by T. cruzi infection. As shown in Table 1, bifascicular block, left anterior fascicular block, and left axis deviation are present in seropositive persons at significantly higher frequencies than in seronegative persons. Significant differences in the frequencies of marked sinus bradycardia, left ventricular hypertrophy, and atrial fibrillation were not observed. However, for each of these abnormalities, infected persons showed nominally higher frequencies than uninfected persons. There was a substantial difference in the frequency of ECG abnormalities, with seropositive persons having a prevalence of approximately 43% versus only 18% in seronegative persons (P = 1 × 10−9). These results clearly demonstrate the effect of T. cruzi infection on sub-clinical heart abnormalities.

The study region in Posse is typical of many rural areas in central Brazil. This large-scale study of the local population provides insights into the implications of Chagas disease for local health services that surveys of cases and controls conducted in hospital settings cannot. The high rates of seropositivity in this rural area indicate that Chagas disease will be a continuing public health problem in the region for the foreseeable future. Despite intensive vector control efforts, Chagas disease will persist as a major consumer of health care resources because of the large population of persons who are already infected. Congenital transmission can result in new infections in regions with no vector-transmitted disease.32 Active transmission still occurs in many areas and congenital transmission also can cause infections. With the decreased emphasis on vector control in Brazil, it is possible that active transmission will recur in areas that were previously considered to be controlled.

The population variation in QT and QRS intervals may be informative in predicting the future health care needs in the region. Several investigators have noted the potential value of QT interval parameters for predicting outcome in Chagas disease.29,33 The QT and QRS intervals were significantly increased in seropositive persons in the Posse population. As previously reported,34–36 persons with ECG abnormalities predictive of a negative outcome in Chagas disease may be apparently healthy. Population level surveys conducted through general health clinics may be an excellent mechanism for identifying asymptomatic seropositive persons whose cardiac health should be monitored on a regular basis.

In conclusion, population level surveys of seropositivity for T. cruzi infection and ECG variables are useful in predicting the future health care needs of local populations in Brazil. The epidemiologic data on seropositivity and ECG variables in the Posse population clearly indicate that Chagas disease will persist for a long time as a major public health burden. Despite the successes of the vector control programs in diminishing active transmission of T. cruzi when assessed at the national level, local populations in areas that are endemic for Chagas disease are still struggling with this devastating disease and will continue to do so for the foreseeable future.