Least-squares means of visual count of mosquitoes around birds over time, after controlling for variance between phases and replicates within a phase. Counts were square-root transformed. Values that do not share a letter are significantly different from each other (α = 0.05), after using Tukey’s adjustment for pairwise comparisons.

Interaction between experiment phase (x axis) and status of bird (control or treatment) as a predictor of total defensive behaviors. Treatment birds were infected during the infection phase; all birds were healthy at all other times. Behavior counts are given as least-squares means to evaluate behavior after controlling for mosquito density, replicate number, and cage position. Behaviors were square root-transformed to improve homoskedacity. Using the Bonferroni correction, differences were considered significant if α < 0.0167.

Interaction between experiment phase (x axis) and status of bird (control or treatment) as a predictor of head movements. Treatment birds were infected during the infection phase: all birds were healthy at all other times. Head movements per minute are given as least-squares means after accounting for mosquito density and time. Using the Bonferroni correction, differences were considered significant if α < 0.0167.

Blood-feeding patterns of Cx. p. pipiens on control and treatment on house finches (raw data). Treatment birds were infected with M. gallisepticum during the infection phase. Mosquitoes that fed on both birds were excluded from this graph. 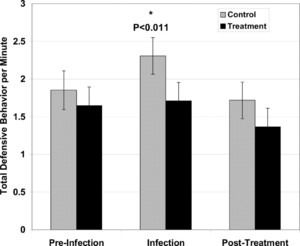 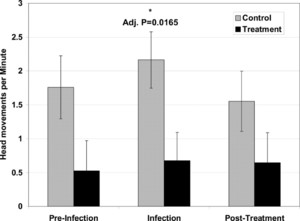 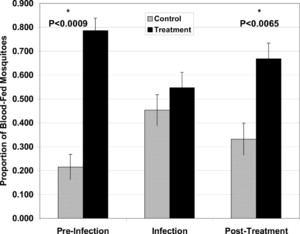 Disease-induced lethargy can diminish host capacity to repel or kill biting mosquitoes. We exposed house finches (Carpodacus mexicanus) to mosquitoes (Culex pipiens pipiens), repeated the experiment after inoculating finches with Mycoplasma gallisepticum, and then repeated the experiment with the same birds after curing their infections. We videotaped avian behaviors before and during mosquito exposure, identifying hosts through blood meal DNA fingerprinting. Results revealed heterogeneity in mosquito preference regardless of infection. Mosquitoes choosing between two healthy finches were more likely to feed upon the same individual bird consistently. When one bird was sick, mosquitoes exhibited no preference. Sick birds made fewer total defensive behaviors than healthy birds, but only foot stomps were associated with reduced mosquito feeding success. Our results suggest that Mycoplasma and other avian infections that alter bird defensive behavior may influence mosquito feeding patterns and transmission of arthropod-borne pathogens such as West Nile virus.