Agarose gel electrophoresis showing amplification of Y chromosome sequences in (A) An. arabiensis (primer 128125I) and (B) An. gambiae s.s. (Primer S23) males and mated females. There was no amplification in virgin females. 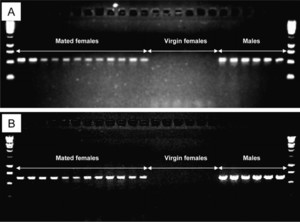 The principal malaria vector in Africa, Anopheles gambiae, contains two pairs of autosomes and one pair of sex chromosomes. The Y chromosome is only associated with males and other Y chromosome–specific DNA sequences, which are transferred to women during mating. A reliable tool to determine the mating status of dried wild An. gambiae females is currently lacking. DNA was extracted from dried virgin and mated females and used to test whether Y chromosome–specific polymerase chain reaction (PCR) markers can be successfully amplified and used as a predictor of mating. Here we report a new PCR-based method to determine the mating status among successfully inseminated and virgin wild An. gambiae females, using three male-specific primers. This dissection-free method has the potential to facilitate studies of both population demographics and gene flow from dried mosquito samples routinely collected in epidemiologic monitoring and aid existing and new malaria-vector control approaches.

Current knowledge suggests that sex chromosomes of many groups of animals and plants evolved from a pair of ordinary autosomes that acquired a major sex-determining locus.1,2 The Y chromosome, frequently associated with sex determination, and its associated genes have been well explored in a range of vertebrate organisms.3 Natural selection is believed to have suppressed the ability of the Y chromosome to recombine with its counterpart.4 Recombination suppression is considered to be responsible for a gradual Y chromosome genetic degradation.5 The silencing of most of the genes present on the Y chromosome6,7 as a result of degradation explains why only a few male fertility–determining genes remain functional on this chromosome.8,9 Among invertebrates, Y-linked gene studies have been limited to Drosophila10 and were recently extended to An. gambiae.11,12

The An. gambiae mosquito has a karyotype consisting of two pairs of autosomes chromosomes 2 and 3 and one pair of sex chromosomes chromosomes X and Y. The Y chromosome constitutes ~10% of the whole genome and is normally associated only with males, and when present in a XX/XY system, induces male development.13 Y chromosome–linked DNA fragments have been characterized and Y chromosome–specific polymerase chain reaction (PCR) markers have been developed.11,12 This finding has been viewed as a milestone toward the application of novel vector control strategies for which a thorough understanding of population structure and gene flow among An. gambiae populations is necessary.

Traditionally, detection of mating success among females relied on microscopic dissection of females to determine the presence or absence of a mating plug in the bursa copulatrix or examination of sperm in the female spermatheca. This method is reliable and robust but is time consuming, labor intensive, and requires fresh specimens. A simple and rapid method to determine the mating status of dried female An. gambiae is therefore required to analyze large sample sizes within a short period of time.

In this study, we tested the hypothesis that Y chromosome–specific PCR markers can be successfully amplified from male sperm DNA present in recently inseminated females of An. gambiae sensu stricto and An. arabiensis. We present this technique as a new dissection-free (PCR based) method to determine the mating status of samples collected during routine entomologic surveys.

Mosquitoes used in this study were from laboratory colonies obtained from the Malaria Research and Reference Reagent Resource Center (MR4) and maintained at the University of California, Davis, CA. These included a colony of Anopheles gambiae s.s. originally collected from Kisumu (East Africa) and a colony of An. arabiensis (Dongola strain) originating from northern Sudan. Pupae of both An. gambiae s.s. and An. arabiensis were isolated in cages allowing males and females to emerge separately. In this experiment, 100 female pupae and 50 male pupae were isolated to provide an appreciable number of virgin females and males, respectively. After adult emergence, 25 virgin females were mixed with 25 males for 3 days and exposed to natural sunlight (dusk) to stimulate mating. Another 25 virgin females were kept in a separate cage for 3 days as a control.

We performed experiments to determine whether a multi-copy locus (ribosomal DNA) can be amplified in inseminated females. The experiment determined whether the DNA from the male partner of mated An. gambiae s.s. and An. arabiensis females could be amplified by PCR. A total of 50 virgin females, 57 potentially mated females, and 28 males of both An. gambiae and An. arabiensis were used in the study. Primers S23 and 128125B gave strong amplification in An. gambiae s.s. females, whereas primer 128125I gave the strongest amplification in An. arabiensis females. DNA from dried specimens amplified in a similar way as those from fresh specimens. All dissected females were found to have sperm in their sper-mathecae. Figure 1, A and B, shows that male DNA from inseminated females of both species can be amplified using Y chromosome–specific PCR markers with similar efficiency as the males themselves. As expected, no amplification was obtained from virgin females.

We showed that this method is suitable for distinguishing mated females from virgin females for both An. gambiae s.s. and An. arabiensis specimens and that this approach lends itself to screening large numbers of recently mated and dried specimens. This finding has useful implications for novel vector control strategies based on the release of large numbers of factory-reared male mosquitoes with the expectation that they will successfully mate with wild females to confer sterility or drive parasite-refractory genes into wild populations. In these cases, the transfer of sterile or transgenic sperm from released mosquitoes to wild conspecifics will depend on the frequency of mating between males carrying the trait (to be introduced) and the females that do not—even if target genes are linked to transposable elements.15 Because mating is ultimately the most appropriate mechanism to deliver the desired traits or genes into a target population,16 an effective method for evaluating mating success is of critical importance. Thus, this new dissection-free technique has potential useful application to novel vector control approaches.

Additionally, this technique will help improve our understanding of gene flow within An. gambiae populations. As opposed to methods based on microscopic dissection and direct observation that are conventionally used to assess male An. gambiae mating success, this method will make it possible to screen a substantially greater number of wild-collected females either in fresh or dried state. Contained semi-field systems are now becoming a central focus for release trials in many studies.17–19 The method developed here can thus make large-scale evaluation of mating success of released males by repetitive female sampling and screening possible.

In conclusion, we showed that mating can be determined by PCR amplification of inseminated female DNA. The speed and ease of this technique, and the fact that dried specimens can easily be evaluated, indicate that this process should allow robust and extensive analysis of large field-collected samples.