Prevalence of mosquito larvae and pupae (by dipping) and the cumulative water volume released from the Tanyard Creek CSO facility during the 5 days prior to sampling. Model: y = 44.6 × exp(−0.0002x).

Association between prevalence of positive mosquito samples (by dipping) and the average rate of water flow from the Tanyard Creek CSO facility during events 1–5 days prior to sampling. Model: y =45.95 × exp(−0.1392x).

Prevalence of positive dips for mosquito larvae after a flooding event exceeding 15 kgal/min in Tanyard Creek.

Mosquito species identified from pupae collected in Tanyard Creek during 2005.

Geometric mean numbers of mosquito immatures samples by stage and study site in Tanyard Creek from June through November 2005. 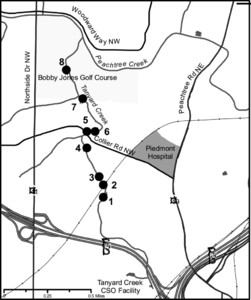 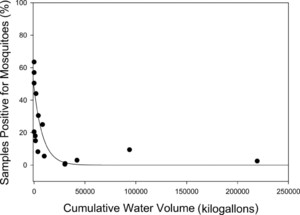 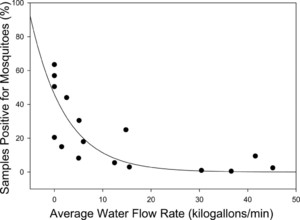 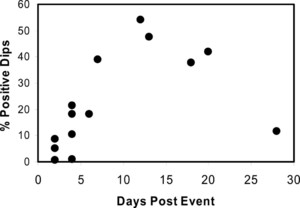 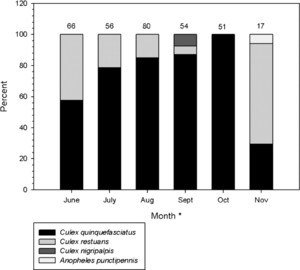 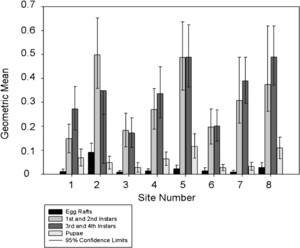 A longitudinal study of mosquito ecology in Tanyard Creek, an urban stream in Atlanta, GA, that receives combined storm and waste water effluent from the Atlanta combined sewage overflow system, was undertaken in 2006. Culex quinquefasciatus was the dominant species found, but Culex restuans was also abundant during the spring with limited numbers of Culex nigripalpis and Anopheles punctipennis also collected. Significant differences in mosquito densities were found with greater densities associated with side pools of water and stagnant water. Mosquito numbers are regulated largely by flooding of the stream by effluent discharges exceeding 15 kgal/min. These floods are associated with significant immediate reductions, but not complete elimination, of mosquitoes from Tanyard Creek. Mosquito numbers rebound within 5–10 days after such floods and rapidly reach high densities.