Localization of Brazilian municipalities and districts (in the case of Rio de Janeiro municipality) where Ae. aegypti populations were evaluated. In Brazil map, thick lines indicate limits among regions. Only evaluated states are delimited, in light gray. 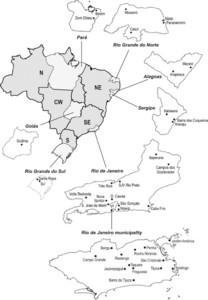 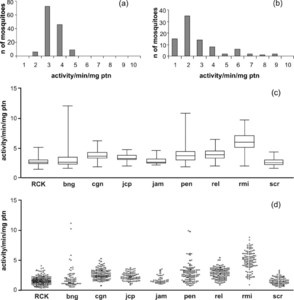 A Malaria Survey of the Island of Jamaica, B. W. I.

In Brazil, Aedes aegypti resistance to temephos, used since 1967, was detected in several municipalities in 2000. Organophosphates were substituted by pyrethroids against adults and, in some localities, by Bti against larvae. However, high temephos resistance ratios were still detected between 2001 and 2004. Field-simulated assays confirmed a low temephos residual effect. Acethylcholinesterase and Mixed Function Oxidase profiles were not altered. In contrast, higher Esterase activity, studied with three substrates, was found in all examined populations collected in 2001. From 2001 to 2004, a slight reduction in α-Esterase (EST) and β-EST activity together with a gradual increase of p-nitrophenyl acetate (PNPA)-EST was noted. Gluthathione-S-transferase alteration was encountered only in the northeast region in 2001, spreading the entire country thereafter. In general, except for α-EST and β-EST, only one enzyme class was altered in each mosquito specimen. Data are discussed in the context of historic application of insecticides in Brazil.