Lineal regression analysis plots between mean density parasitemia and mean platelet counts for Groups a, b, and c, panels A, B, and C, respectively; on the first 8–9 days of infection with Plasmodium vivax AMRU-1. Inset is the correlation coefficient value for each group.

Individual plotted values for parasitemia, erythrocytes, hemoglobin, hematocrit %, platelets, reticulocyte index, for Group a Aotus, in which primary treatment was effective (Panels A–F), Group b, treated with mefloquine but had a transfusion (Panels G–L), and Group c treated with mefloquine and a blood transfusion (Panels M–R). Horizontal dotted lines indicates: a) lower hemoglobin limit for severe anemia (< 6 gm/dL) (Panels C, I, and O), b) lower platelet limit for severe thrombocytopenia (< 50,000 platelets × μL) (Panels E, K, and Q) and c) limit for bone marrow suppression (reticulocyte index < 2) (Panels F, L, and R). In the upper right of the first panel of each column is the monkey number.

Individual plotted values for white blood cells (WBC), glutamate pyruvate transaminase (GPT); creatinine and blood urea nitrogen (BUN) and weight, for Group a Aotus, in which primary treatment was effective (Panels A–E), Group b, treated with mefloquine but had a transfusion (Panels F–J) and Group c, treated with mefloquine and a blood transfusion (Panels Q–N). In the upper right of the first panel of each column is the monkey number. 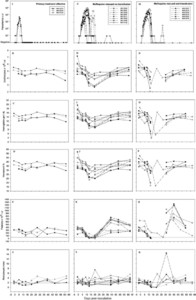 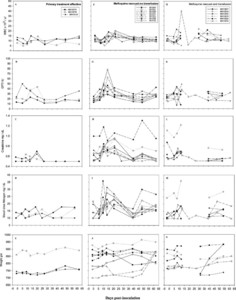 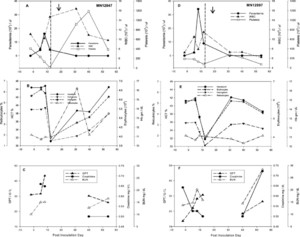 During routine antimalarial drug efficacy trials, we observed, for the first time, severe thrombocytopenia developing in Aotus monkeys infected with Plasmodium vivax. Data obtained from 26 Aotus infected with the AMRU-1 strain showed that 77% developed severe thrombocytopenia, whereas only 15% had severe anemia, with hemorrhagic diathesis ensuing in 31%. In general, thrombocytopenic monkeys either failed primary treatment with experimental antimalarial drugs or were found to have higher-density parasitemias, longer patency duration, and lower hematocrits. In these monkeys, severe thrombocytopenia inversely correlated to parasitemia (R = −1.0), and animals that received a blood transfusion had significantly higher platelet counts (P < 0.05) by day 38 after inoculation. In conclusion, the AMRU-1 strain of P. vivax, was considered to be highly pathogenic to Aotus monkeys, and thrombocytopenia rather than anemia should be regarded an early indicator of drug treatment failure with this strain.

Thrombocytopenia is a classic feature of malaria. However, severe thrombocytopenia is less well described in humans1 with vivax malaria. Human cases of immune-mediated vivax thrombocytopenia have been reported,1–3 and low platelet counts have been found in more Plasmodium vivax cases (74.7%) than Plasmodium falciparum cases (59.9%) in non-immune humans.4 Nevertheless, it was not until recently that human P. vivax malaria cases, exhibiting severe thrombocytopenia,1,5–7 cerebral malaria, disseminated intravascular coagulation (DIC), acute respiratory distress syndrome, renal failure, circulatory collapse, severe anemia, hemoglobinuria, and jaundice, were described.8 In addition, for the first time, a parallel trend between thrombocytopenia and parasitemia was found to be associated with both P. falciparum and P. vivax infection.9 Likewise, an inverse relationship between platelets and parasite levels in humans (P. vivax and P. falciparum) and animal models such as mice infected with Plasmodium berghei berghei10,11 and Saimiri and Aotus monkeys infected with P. falciparum have been observed.12–16 Herein, we report for the first time severe thrombocytopenia (< 50 × 103 platelets/μL) and hemorraghic diathesis occurring in Aotus monkeys infected with the AMRU-1 strain of P. vivax. We also examine its correlation with parasitemia and other blood parameters to understand the pathogenesis of the severe thrombocytopenia observed in this animal model.

Data were obtained from spleen intact (male and female) Aotus lemurinus lemurinus monkeys karyotypes VIII and IX,17 with weights of 700–998 g, that had been previously exposed to P. falciparum and cured. Twenty-six were used in two P. vivax drug efficacy trials (DETs; Trial 1 and Trial 2), and six were used as controls in a vaccine study. The animals were housed at Gorgas Memorial Institute in Panama and cared and maintained as described.18 Original protocols were approved by the Gorgas Memorial Institutional Animal Care and Use Committee, under accession numbers 2001/01 and 2002/01, and radical treatment of infection with a curative dose of mefloquine was the designed endpoint of the experiments. The data presented herein is a collateral experimental retrospective data analysis of the original experimental protocols. The experiments reported here were conducted according to the principles set forth in the “Guide for the Care and Use of Laboratory Animals,” Institute of Laboratory Animal Resources, National Research Council (1996).

Six animals that served as controls for a vaccine study were followed up for parasitemia, complete blood count (CBC), and chemistry profile (0.2 mL EDTA) at different time intervals up to 35 days PI when they received radical treatment with mefloquine at 20 mg/kg to end the experiment.

Trial 1 and 2 animals were inoculated intravenously in the saphenous vein with 5 × 106 P. vivax AMRU-1 parasites on its 60th Aotus passage in Trial 1 and the 61st passage in Trial 2. This strain, a chloroquine- and pyrimethamine-resistant isolate from Papua New Guinea, originally isolated in 199419 (received from the Walter Reed Army Institute of Research in June 24, 1993) and adapted to Panamanian Aotus monkeys,20 was not considered to be highly pathogenic and lethal to Aotus l. lemurinus when these studies were conducted but needed treatment with mefloquine to end the infection.

Control vaccine trial animals were inoculated intravenously with 10,000 P. vivax Sal-I parasites (received from CDC in May 6, 1997) that generally self-cure without treatment.

Parasite counts were done by the method of Earle and Perez,21 using daily Giemsa-stained thick blood smears obtained from a prick in the marginal ear vein until parasite clearance occurred, and bi-weekly thereafter, up to day 100 PI when the animals were considered cured. If recrudescence occurred, daily blood smears were resumed.

Criteria for thrombocytopenia and anemia.

Radical treatment with mefloquine (a single 20-mg/kg oral dose), was administered to end the experiment if the animals presented any or a combination of the following: 1) severe thrombocytopenia (< 50 × 103/μL), 2) severe anemia (> 50% hematocrit reduction from baseline or hemoglobin < 6 g/dL), or 3) persistent parasitemia beyond day 15. Transfusions with 2–3 mL of citrated whole blood—non–cross-matched—from a healthy donor monkey were carried out if the animals developed severe thromobocytopenia, anemia, or bleed from the gums22 (Tables 1 and 3).

SigmaStat and SigmaPlot software were used to perform regression and correlation analysis, Mann-Whitney U test and χ2 test were used for for non-parametric data, and P ≤ 0.05 was considered statistically significant.

Although a number of factors other than density of parasitemia could have contributed to the shortened life span of platelets observed in these studies, such as platelet hypersensitivity,10 direct parasitization of platelets,23 antiplatelet auto-antibodies,3,11,24,25 platelet-mediated clumping,26 platelet dysfunction, aggregation and sequestration,27,28 platelet oxidative stress,29 DIC,30 and macrophage colony-stimulating factor activation of the reticuloendothelial removal system,13 it is evident from the results obtained in the correlation analysis performed in these studies, that parasite density could be implicated as a direct cause of the severe thrombocytopenia observed in these animals (Figures 1, 2K and Q, and 4A; Tables 4 and 5). For instance, it is known that P. falciparum–infected red blood cells (IRBCs) bind to platelets through the CD36 surface receptor31 and that human megakaryocytes and platelets express CD36 on their surface.32 In addition, activation of human platelets by IRBCs is triggered by parasite-derived substances shed from the erythrocyte membrane.33 However, this mechanism has not been characterized in Aotus monkeys, and a homologous receptor in Aotus platelets or megakaryocytes has yet to be identified. Moreover, unlike cells infected with P. falciparum, those infected with P. vivax do not adhere to platelets or purified CD36 receptors, suggesting that thrombocytopenia in vivax malaria is not related to platelet–red cell attachment, although P. vivax–infected red cells can form rosettes.34

The fact that control monkeys from both Trials 1 and 2 developed severe thrombocytopenia 1–3 days after receiving treatment with pyrroloquinazolinediamine PQZ-4A on Days 10 and 11 PI, too early to be associated with drug-associated bone marrow toxicity, which have been reported for other DHFR inhibitors when used for prolonged periods of time,35–38 supports our findings that an inverse correlation exists between parasitemia and thrombocytopenia (Figure 1), as was also observed with the monkeys from the vaccine study (Table 5).

Based on these observations, we postulate that P. vivax–infected cells release parasitic-derived substances39,40 or induce the release of pathologic amounts of inflammatory cytokines.41,42 That in turn inhibits platelet production at the bone marrow level or depletes a plasma factor needed for thrombo and/or erythropoiesis,43,44 as observed in the depressed reticulocyte index (< 2) before radical treatment with mefloquine (Figure 2L–R). This hypothesis is supported by the fact that, once a blood transfusion was administered to the monkeys in Groups b and c (Table 3), platelets—that are known to have a half-life of 7–9 days45—recovered in great numbers (P < 0.05) by Day 38 PI (19 days after transfusion; Figure 2Q). Observation, that cannot be only explained by the numbers of transfused cells; but indicated that a plasma factor, depleted during infection, could have played an important role in this remarkable recovery. The proposed model is supported by the findings in this study, and those of others,16,46 that reticulocytosis did not develop until parasitemia density had fallen below detectable levels or the animals are radically cured with mefloquine (Figure 4A–C). An exception to this pattern was observed in one animal (MN12997) from Group c (Figure 4D–F), which presented a reticulocyte suppression until Day 54 PI. In this animal, platelets recovered to baseline by Day 31 PI (12 days after transfusion), but the animal became thrombocytopenic again by Day 54 PI (75 × 103/μL), indicating an immune-mediated thrombocytopenia, a transient drug-induced bone marrow suppression, or an impaired erythro- and/or thrombopoiesis caused by renal disease, as indicated by the increase in creatinine and BUN (Figure 4F). This observation could help explain why 38% of the monkeys in Group c did not respond to a blood transfusion, although they had been treated with mefloquine on average 10 days earlier than Group b (Day 13 PI; P = 0.0000031).

Platelet counts in Aotus monkeys infected with P. vivax AMRU-1 and treated with or without transfusion, mefloquine, or both