Two human cases of DENV infection (A and B) identified by WB (NS1 positive) and confirmed by PRNT and RT-PCR. 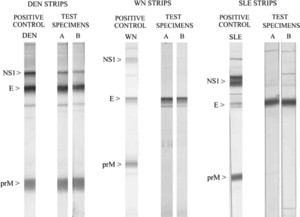 The spread of West Nile virus (WNV) across the United States into areas with endemic flavivirus activity has complicated serologic surveillance of seasonal virus activity and diagnosis of infected individuals. Here we describe preliminary results from a comparison of serologic assays for flaviviruses: the reference plaque reduction neutralization test (PRNT), enzyme immunoassay (EIA), and a Western blot (WB) in which crude viral lysates were electrophoresed and blotted onto nitrocellulose. Human and chicken sera were tested and compared by each method against WNV and St. Louis encephalitis virus (SLEV). Antibody binding to three viral proteins determined WB interpretation: non-structural protein 1 (NS1), envelope (E), and pre-membrane (prM). WB results for a group of serially collected human plasma samples from WNV seroconverting blood donors were also correlated with transcription mediated amplification (TMA) and polymerase chain reaction (RT-PCR) results. Reactivity with NS1 appeared to be the most useful differentiating marker of WNV and SLEV infection in humans and chickens. Envelope protein was highly cross-reactive and, as indicated by additional results from dengue virus (DENV)-positive human sera, is perhaps useful serologically as a flavivirus group antigen.

In recent years, West Nile virus (WNV) has become a virus of worldwide importance. First isolated in 1937 in the West Nile district of Uganda, it appeared in the United States in 1999. The virus has since spread westward, arriving in California in July 2003.1–3 In California, where St. Louis encephalitis virus (SLEV) is endemic, it is now important to distinguish WNV serologically from SLEV as part of the State’s arbovirus surveillance program. Additionally, dengue virus (DENV) is a significant public health concern in Latin America and Asia, and California is a gateway to these populations.4,5 Rapid serologic screening assays such as the enzyme immunoassay (EIA) are sensitive but cannot reliably distinguish different flaviviruses because of antigenic cross-reactivity and must be confirmed by the more specific plaque reduction neutralization test (PRNT).6,7

WNV, SLEV, and DENV, all members of the Japanese encephalitis virus (JEV) serocomplex in the family Flaviviridae, are positive-sense RNA viruses with a 30- to 35-nm icosahedral core surrounded by a lipid bilayer envelope. The genome is composed of three structural proteins (C, prM, and E) and seven non-structural proteins (NS1, NS2a, NS2b, NS3, NS4a, NS4b, and NS5). The envelope protein (E) is believed responsible for host cell binding and hemagglutination and is a major target for neutralizing antibodies. The pre-membrane protein (prM) is cleaved during maturation by the cellular protease furin into the structural protein M and a “pr” segment; this cleavage seems to be an important factor in the maturation of the virus; however, antibodies to prM can provide protective immunity. The NS1 protein exists in cell-surface associated and extracellular forms. The extracellular form of NS1 can elicit a protective humoral immune response.8,9 Cardosa and others10 have shown that Western blot (WB), and specifically, prM may be used to serologically differentiate individuals infected with DENV from those infected with JEV. Although our preliminary WB results for two confirmed human DENV positive sera also showed that prM reactivity could distinguish DENV immune serum from that of WNV and SLEV, our results for WNV and SLEV immune sera showed cross-reactivity between WNV and SLEV prM. Reactivity with NS1 was more specific when attempting to differentiate WNV and SLEV immune sera, and E protein was broadly cross-reactive with WNV, SLEV, and DENV immune sera.

Chicken sera were assayed for neutralizing antibodies to the NY-99 strain of WNV and the Ruis strain of SLEV by PRNT as previously described.14 In summary, the test was performed using Vero cells cultured in six-well plates. Serial dilutions of the test specimens were challenged with 100 plaque forming units (PFUs) of virus, incubated for 1 hour at 37°C and adsorbed to confluent cell monolayers for an additional 1.5 hours at 37°C. After adsorption, a single agarose overlay system was used for WNV, and a double overlay system was used for SLEV. Plates were read at 4 days after infection for WNV and 7–10 days after infection for SLEV. Neutralization titer was the highest serum dilution showing > 80% reduction of plaques relative to a serum-free control. If a positive specimen failed to show at least a 4-fold difference in titer between the two viruses, it was interpreted as undifferentiated “flavivirus positive.” Titers < 1:20 were interpreted as negative.

Antigens for WB (WNV, SLEV, and DENV) were prepared by infecting Vero cells with live virus and harvesting the infected cell monolayer. Vero cell cultures were grown in 75-mm2 tissue culture flasks containing 1× minimal essential medium (MEM) with Hank salts, 10% fetal bovine serum (FBS), and antibiotics. Viral inocula were adsorbed to Vero cells for 30 minutes at room temperature. Medium was replaced, and virus cultures were incubated at 37°C until the cytopathic effect (CPE) could be observed in ~75% of the cells (3+). The supernatant was removed, and the cell monolayer was washed once in phosphate-buffered saline (PBS) before 2 mL of lysis buffer containing protease inhibitors was added (75 μmol/L KCL, 1% Triton-X 100, 0.2 mmol/L phenylmethanesulphonyl fluoride [PMSF], 0.2 TIU aprotinin). The cell monolayer was allowed to lyse for 30 minutes on ice and was centrifuged for 10 minutes at 14,000g to remove cell debris. The lysate was aliquoted and stored at −80°C.

Thawed viral lysates were electrophoresed, without reducing or heating, on 10% discontinuous polyacrylamide gels and transblotted to nitrocellulose membranes. The nitrocellulose membranes were washed with PBS, cut into 4-mm strips, and stored at -80°C. When needed, nitrocellulose strips were placed in individual plastic troughs and incubated overnight at room temperature with 10 μL test serum in 1 mL of blot buffer, 5% blotting grade blocker (Bio-Rad, Hercules, CA) in PBS, on a platform rocker. The strips were washed in PBS, and the appropriate, peroxidase-labeled, anti-IgG conjugate in blot buffer was added and incubated for 60 minutes. After washing, strips were developed for 10 minutes with diaminobenzidine (DAB) substrate, washed again, and air dried before reading.

Human plasma specimens were tested for WNV IgM and WNV IgG using FDA approved EIA kits (Focus Diagnostics, Cypress, CA) according to manufacturer’s instructions. WNV IgA was measured using an in-house α-capture EIA modeled after the IgM EIA. WNV IgM, IgG, and IgA results were expressed as sample versus calibrator ratio (SCR), calculated by dividing the absorbance value obtained for the donor sample by the absorbance value obtained for the calibrator serum included in all assay runs. A positive result was defined as an SCR > 1.10 for IgM, > 1.50 for IgG, and > 1.00 for IgA.

WB results revealed differences in the relative cross-reactivity for the three proteins studied. The NS1 band was the least cross-reactive and was the best correlate to the presumed identity of the flavivirus infection, whereas the prM band was variably cross-reactive, and the E band was cross-reactive without exception. Reactivity with E alone was given the general “flavivirus” interpretation, and positive identification was strictly defined as NS1 reactive. Limited quantities of WNV and SLEV antigens were also prepared in the C6/36 mosquito cell line, but no significant advantage or disadvantage in specificity or sensitivity was observed compared with Vero-cell-grown antigens (data not shown).

All of the human blood donors (Table 1) were TMA and RT-PCR positive for WNV RNA at the time of the index donation (basis for detection and study enrollment) and seroconverted to WNV IgM and IgG on follow-up.11–13,15 Three of the donors, 1, 2, and 3, had elevated PRNT titers for both WNV and SLEV shortly after the index viremic donation with progressively increasing seroreactivity during follow-up, whereas the remaining eight cases were seronegative or relatively low tittered near index and developed higher titers for WNV alone during follow-up. Based on the 4-fold difference criterion for interpreting PRNT, donors 1, 2, and 3 would be interpreted as SLEV positive shortly after index and during follow-up. The WB interpretations for these three donors began as WNV for the earliest time-points but were dual positive for WNV and SLEV within 1–2 weeks of the index donation time-point. The remaining seven human donors were WNV positive by PRNT and WB and negative for SLEV-specific antibodies. Symptom histories based on interviews were available for only four of the human donors. Donors 3 and 7 were asymptomatic. Donor 5 had symptoms of body aches, muscle weakness, nausea/vomiting, confusion, and restlessness before index donation. Donor 6 had symptoms of eye pain, body aches, and dry throat after index donation.

WB correctly identified WNV antibody before a positive EIA for 6 of 11 human donors with two simultaneous detections (where specimens were available), and one EIA positive before WB (Donor 7). Donor 10 remained undifferentiated (flavivirus positive) for all specimens collected.

During the course of this study, two suspected DENV-positive human specimens were tested by WB against three viruses: WNV, SLEV, and DENV (DENV-2, New Guinea C strain; Figure 1) and reacted with the E protein on all three blots. The two specimens were strongly reactive with all three bands on DENV strips and negative for NS1 and prM on WNV and SLEV strips. These two cases were later confirmed DENV positive by PRNT at the VRDL and the CDC.

Results for 8 of 10 chicken sera tested by WB agreed with PRNT results (Table 2). Two sera, Specimens 3 and 7, were interpreted as dual positive on WB but were SLEV positive and WNV positive by PRNT, respectively.

Through analysis of human and chicken sera, we have begun to define criteria for distinguishing between WNV, SLEV, and to a lesser extent, DENV antibody positive sera by WB. Based on results from WNV, SLEV, and DENV-2 blots using crude viral lysate preparations, the broadly cross-reactive E protein could potentially differentiate flaviviruses from other arboviruses. Pre-membrane protein was less cross-reactive and may be useful at the serogroup level, i.e., differentiating the JEV serogroup (WNV and SLEV) from the DENV serogroup (DENV-2, etc.). Non-structural protein 1 was the least cross reactive of the three antigens studied and so best differentiated WNV from SLEV.

West Nile blot interpretations at the index time-points for human donors 1, 2, and 3 turning dual positive for subsequent bleeds seemed reasonable considering the pattern of positive WNV RNA results and positive SLEV PRNT results. These donors perhaps demonstrated the phenomenon of “original antigenic sin,” where, in this case, WNV infection anamnestically stimulated SLEV specific antibody production due to a prior SLEV exposure and also indicate that WB could correctly identify current infection in such cases, when provided an acute specimen. The validity of the dual positive WB interpretations for 2 of the 10 chicken sera will require further study.

PRNT results reflect total neutralizing antibodies—IgM and IgG included. The WB data presented were for IgG antibody alone, but the assay could accommodate IgM detection with proper removal of IgG before testing. Although WB antigens were minimally purified and standardized, these preliminary data suggest the possibility of using WB to differentiate flavivirus infection serologically in a more convenient and less time-consuming assay than PRNT. WB results may be obtained in a single day as opposed to up to 10 days for PRNT.