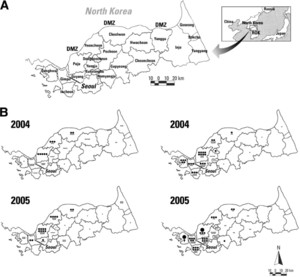 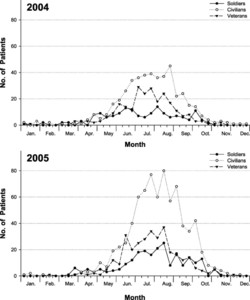 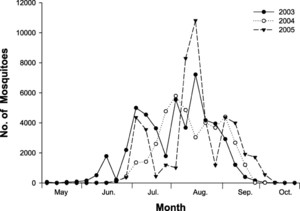 Plasmodium vivax malaria had been endemic on the Korean Peninsula for many centuries.1 During the Korean War (1950–1953), ~15% of all febrile illnesses among the Republic of Korea (South Korea; ROK) military personnel were caused by malaria.2,3 As socioeconomic conditions in ROK improved and associated malaria control efforts were strengthened, P. vivax malaria cases decreased rapidly, and finally ROK was declared malaria free in 1979.4,5 However P. vivax malaria has recently become an important health threat in ROK since its reemergence in 1993.

Malaria is classified as one of the Group 3 communicable diseases in ROK. The Division of Communicable Diseases Information and Surveillance at the Korea Center for Disease Control and Prevention (Seoul, Republic of Korea) collects data on all cases among civilians, veterans, and military personnel. The case definition of malaria includes any febrile illness with demonstration of P. vivax parasites in peripheral blood smears.5,9 Cases among military veterans were defined as those who 1) had a malaria attack within 24 months after discharge from military service and 2) had been stationed in a malaria-risk area.

The annual geographic distribution of P. vivax malaria in ROK military personnel, veterans, and civilians was determined by the location where they were stationed or where they lived when the diagnosis was made. The seasonal incidence was analyzed by grouping cases according to 10-day intervals.

The number of Anopheles mosquitoes was monitored using a light trap in Ganghwa County, which is one of the malaria-risk areas in ROK, during the malaria transmission season from 2003 through 2005. Trapping was conducted once a week between 7:00 pm Tuesday and 6:00 am Wednesday from May through October.

Most of the P. vivax malaria cases occurred from June through September, with the peak from late June to late August in 2004 and from early July to early September in 2005, respectively (Figure 2). The 10-day incidence peak of civilian cases never reached 50 cases during 2004; however, it increased to reach 80 cases in 2005.

Anopheles sinensis mosquitoes, which are the major transmission vector in ROK, were collected and counted on a weekly basis in Ganghwa County from 2003 through 2005. Despite a higher density during mid-August in 2005, the weekly number of mosquitoes during this time revealed a similar pattern (Figure 3). However, in 2004 and 2005, the numbers of mosquitoes in September were higher than 2003, respectively.

The possibility of increased local transmissions in ROK should be considered as another cause for increase of P. vivax malaria cases in 2005. Because civilian cases exceeded one half of the total annual cases in 2003, the proportion of civilian cases steadily increased to reach nearly 60% of the total annual cases in 2005. It is believed that the chloroquine-primaquine chemoprophylaxis, which has been used by the ROK army since 1997, has helped reduce malaria in the military.14 The number of ROK soldiers given chemoprophylaxis increased constantly to reach > 90,000 soldiers during 2004 and 2005 (personal communication). In addition, 14-day presumptive anti-relapse therapy using primaquine has been used since 2001 on soldiers who complete a term of military service in malaria-risk areas before their discharge. Large-scaled chemoprophylaxis of soldiers serving in the malaria-risk areas resulted in a constant reduction of the proportion of military personnel and veteran cases among the total annual cases during this period. However, in Ganghwa County, Gimpo, Goyang, and Paju Cities, where increase of civilian cases were observed in 2005, the civilians lived generally south of the military establishment. The increased proportion of civilian cases in these areas suggests that local transmission might have taken place in the southern side of the areas where soldiers were stationed along the DMZ during this period. This pattern has been consistently observed since 2002 when civilian cases accounted for about one half of the total annual cases.8 In particular, the population densities of Gimpo, Goyang, and Paju Cities have become higher because of rapid urbanization. Within these locations, densely populated areas are adjacent to rural areas where the vector inhabits a favorable environment; this proximity may have increased the chances of local transmission. The sudden increase of military personnel and civilian cases in Namyangju City in 2005 was exceptional. This area had never been included among the malaria-risk areas since the first re-emergence in 1993. Even though it may be controversial whether the increase of malaria cases in Namyangju City was a focal epidemic or a direct expansion of the malaria-risk areas, special attention must be paid to this area because it is also one of the areas where rapid urbanization has been under way and where densely populated neighborhoods are adjacent to rural areas. The malaria cases identified on Yeongjong Island, where the Incheon International Airport is located, were included into the cases of Incheon City. Yeongjong Island has consistently had several malaria cases every year. Thus, precaution is necessary to prevent the direct expansion of P. vivax malaria to the International Airport.

In conclusion, the number of cases of P. vivax malaria in ROK increased in 2005; this was the first time since the trend for decreasing cases was observed in 2001, despite the steady decrease in DPRK during this period. Increased civilian cases in the southern side of the areas where soldiers were stationed along the DMZ suggest active local transmissions in these areas. Regional increase of P. vivax malaria cases in DPRK, increased local transmission, and active transmission by vector mosquitoes during the summer and early fall of this period might have contributed to the increase of P. vivax malaria cases in ROK in 2005. Despite the decrease to negligible levels in the eastern part of the malaria-risk areas, 16 cases occurred in 2005 in Namyangju City, not previously included in the malaria-risk areas before 2005. Therefore, special attention should be focused on local transmission to prevent expansion of the infection.