Kinetics of IgG responses to heterologous variant surface antigens among returned travelers with a single P. falciparum infection. Sera from 14 returned travelers with acute P. falciparum (A–V) and 5 non-exposed Melbourne controls (MC1–MC5) were tested for reactivity with surface antigens of P. falciparum lines expressing distinct PfEMP1 variants, using flow cytometry. Post-infection blood sampling times are indicated. Data are expressed as the adjusted mean fluorescence intensity (MFI of uninfected erythrocytes subtracted from the MFI of infected erythrocytes). The cut-off line for seropositivity was equivalent to 2× the mean of 5 Melbourne negative controls. Using this threshold, no sera were reactive with the negative control line, CS2, which expresses a PfEMP1 variant (VAR2CSA) that is usually recognized only by sera from women exposed to placental malaria infection. Note that collection of the second blood sample was delayed for subjects A (14 weeks), M (12 weeks), and S (10 weeks). 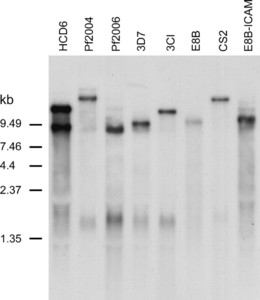 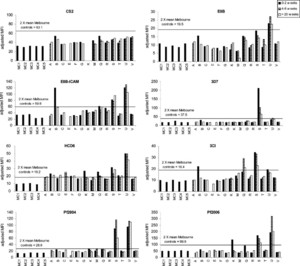 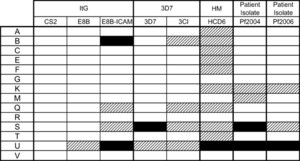 Antibodies to variant surface antigens (VSA) including Plasmodium falciparum erythrocyte membrane protein 1 (PfEMP1) have been associated with protective antimalarial immunity that appears to be variant-specific. This study of adult returned travelers with a single acute P. falciparum infection investigated whether a primary antibody response includes IgG specific for heterologous VSA. We found that 11 of 14 patients had IgG reactive with up to six P. falciparum lines expressing different heterologous PfEMP1 variants, measured by flow cytometry (reactivity greater than two times the mean of the negative control sera was defined as “positive”), with high reactivity (greater than four times the mean of the negative controls) detected in three patients. The dominant variant(s) recognized differed between seropositive individuals. Despite previous evidence that antibody responses to heterologous VSA are short-lived, seven patients had detectable IgG at > 20 weeks post-infection. Together these data suggest that a single P. falciparum infection can be sufficient to induce antibodies reactive with several PfEMP1 variants, although the repertoire of target epitopes they recognize may still be restricted.

Acquisition of immunity to malaria is associated with development of antibodies to variant antigens expressed on the surface of malaria-infected erythrocytes.1 Plasmodium falciparum erythrocyte membrane protein 1 (PfEMP1), a parasite protein that mediates cytoadherence to multiple host receptors (reviewed in ref. 2), is the best characterized of these variant surface antigens (VSA). Antibodies reactive with VSA are mostly variant specific. Sera collected from children recovering from acute malaria infection recognize VSA expressed by autologous but not heterologous parasites in agglutination assays3. However, modest transient increases in antibodies reactive with heterologous VSA during acute malaria infection have been detected by more sensitive flow cytometry assays.4,5 Because these studies were done in individuals living in malaria-endemic areas, there are two potential explanations: either malaria infection leads to activation of memory B cells specific for heterologous VSA to which the individual has been exposed previously, or antibodies generated during infection with parasites expressing novel VSA also recognize heterologous VSA. Antibodies to conserved or cross-reactive epitopes of PfEMP1 could be an important component of protective immunity.

This study of adult returned travelers suffering a single P. falciparum infection investigated (a) whether antibodies to heterologous VSA could be generated during a single infection and (b) the duration of primary anti-VSA antibody responses in adults in the absence of continuing malaria exposure.

Serum was collected with informed consent from 14 travelers returning from malaria-endemic areas who presented with P. falciparum to the Royal Brisbane and Princess Alexandra Hospitals in Brisbane, Australia, between September 1998 and March 2003. Samples were collected at initial presentation and then approximately 1 month and 6 months later. Negative control sera were obtained from blood donors with no history of malaria exposure (kindly provided by the Australian Red Cross Blood Service). Isolates of P. falciparum were obtained from patients presenting to the Royal Melbourne Hospital, Australia. This study was approved by the Human Research Ethics Committees of the Royal Brisbane and Women’s Hospitals, Princess Alexandra Hospital, and the Melbourne Health Research Directorate.

None of the patients had a past history of P. falciparum or Plasmodium vivax infection. The median age was 32.5 years (range 19–62 years). There were six males and eight females. Four patients acquired P. falciparum in Africa (E, R, S, U), two in Asia (A, K), and the remaining eight were infected in the Western Pacific region (Papua New Guinea or the Solomon Islands). Three patients (B, K, U) had previously lived in malaria-endemic areas, but comprehensive clinical history did not suggest prior episodes of malaria, and all three had lived in Brisbane for > 2 years before recent travel to endemic areas. The median parasitemia was 24,900/μL (range 2,230–326,000/μL).

For the purposes of this study, we used genetically distinct laboratory P. falciparum lines (ItG, 3D7 and HM [the latter isolated from a patient infected in South East Asia]) with variants selected for defined adhesion phenotypes, cultured as described.6–8 Two culture-adapted heterologous isolates from patients infected in West Africa were also included (Pf2004 and Pf2006). Adhesion assays were performed as described9 using gelatin-enriched trophozoites at 3% hematocrit. Differences in adhesion phenotypes between the P. falciparum lines (Table 1) were consistent with expression of different PfEMP1 variants. Northern blotting performed as described10,11 confirmed that different var genes encoding PfEMP1 were transcribed in each of the lines (Figure 1). One dominant var was expressed by each line, except HCD6, which had two dominant transcripts.

IgG reactive with VSA was measured by flow cytometry as described.12 IgG bound to the infected erythrocyte surface was detected by sequential incubation with rabbit anti-human IgG (Dako, NSW, Australia) (1/100), and AlexaFluor 488-anti rabbit IgG (1/500) (Invitrogen, Victoria, Australia). Quadrants were positioned to measure the geometric mean fluorescence intensity (MFI) of infected erythrocytes stained with ethidium bromide (10 μg/mL). The MFI of uninfected erythrocytes was subtracted from the MFI of infected erythrocytes. The CSA-binding P. falciparum line, CS2, was used as a negative control because it is not usually recognized by sera from individuals without prior exposure to malaria in pregnancy.12–14 An individual serum sample was considered reactive to a particular P. falciparum variant if the MFI was > 2-fold of the mean MFI of five Melbourne negative control sera. Care must be taken in defining positive seroreactivity by an arbitrary cut-off point; however, using this threshold, no positive reactivity to CS2 was detected, while all other lines (adherent to CD36 ± ICAM-1) were recognized by serum from at least one patient (Figures 2 and 3), suggesting that the reactivity detected was due to binding of antigen-specific IgG to VSA.

Of 14 individuals exposed to a single P. falciparum infection, 11 had IgG specific for heterologous VSA expressed by at least one of the P. falciparum lines, and IgG specific for multiple heterologous VSA types was detected in some individuals (Figures 2 and 3). Sera from three individuals showed high-level reactivity (> 4× the mean of negative controls) with one or more lines (Figure 3). Those sera with the broadest reactivity contained the highest levels of antibody to individual isolates, with a significant correlation between the number of isolates recognized and peak MFI (highest MFI value measured for each individual across all time-points) of IgG binding to each of the lines, except for CS2 (Pearson’s correlation coefficient r ranged between 0.69 and 0.91; P < 0.05 to P < 0.0001). The dominant line(s) recognized were not the same in all individuals (Figures 2 and 3). These data indicate that antibodies reactive with heterologous VSA are induced by acute infection and not simply derived from activation of memory B cells specific for VSA expressed during previous infections. There are two possible interpretations that are not mutually exclusive: (1) Anti-PfEMP1 antibodies induced by infection with a single variant type are able to cross-react with multiple variants. Variability in the pattern of reactivity suggests that antibodies cross-react with different groups of PfEMP1 molecules. (2) Exposure to multiple PfEMP1 variants occurs simultaneously during infection. Consistent with this suggestion, transcripts of multiple var genes have been detected during the early cycles of blood-stage infection in experimentally infected volunteers.15,16

The level of IgG reactive with each P. falciparum line (peak MFI) and the number of isolates recognized by each individual was not significantly correlated with parasitemia at presentation. Patient age also had no influence on seroreactivity. Larger sample sizes in future studies may yet identify significant associations.

In some individuals we found no reactivity with any of the P. falciparum lines tested. These individuals may not have been exposed to PfEMP1 variants expressed by the P. falciparum lines we used. Alternatively, anti-PfEMP1 antibody responses might have been restricted to IgM, as documented in Kenyan children.17 However, poor anti-PfEMP1 antibody responses have also been observed in some individuals living in malaria-endemic areas.4,17,18 Host genetic factors probably contribute but may not be the only explanation.

In seropositive individuals, levels of variant specific IgG tended to decline over time. However, in seven of 11 seropositive individuals (B, C, E, F, Q, S, and U), modest but detectable levels of IgG reactive with at least one P. falciparum line were present at > 20 weeks post-infection (Figure 2), despite the absence of re-exposure. These observations contrast with previous reports of short-lived antibody responses to homologous VSA and with even more transient responses to heterologous VSA.17,18 One plausible explanation for the discrepancy is differences in age of subjects. Previous studies of the kinetics of anti-PfEMP1 antibody responses have been in children, whereas our subjects were adults. In children, particularly those < 1 year of age, antibody responses are often of short duration, possibly because of a limited capacity of the bone marrow to support long-lived plasma cells (reviewed in ref. 19).

In summary, we have studied the development of heterologous anti-PfEMP1 antibody responses in previously malaria-naïve adults experiencing a single P. falciparum infection. In some individuals, we detected IgG specific for multiple VSA types, but the VSA types that were recognized differed among individuals. The pattern of seroreactivity was consistent with induction of antibodies that were cross-reactive with a restricted repertoire of PfEMP1 variants and/or concurrent exposure to multiple PfEMP1 variants during a single infection. In other individuals, there was no detectable IgG specific for heterologous PfEMP1 variants, consistent with observations made previously in malaria-endemic areas. In contrast to previous studies, we found that antibody responses to heterologous VSA could be detected at least 20 weeks post-infection in some individuals. We suggest anti-PfEMP1 antibody responses may be of longer duration in adults than children. In conclusion, this study in previously malaria-naïve individuals indicates that the primary antibody response to P. falciparum infection may contain IgG to multiple VSA types that nonetheless have a restricted repertoire.