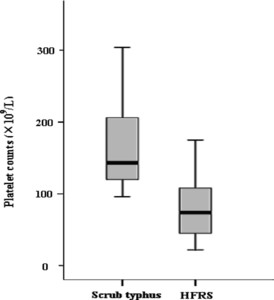 Scrub typhus is an infectious disease caused by Orientia tsutsugamushi transmitted by infected chigger mites and characterized by fever, an eschar at the chigger bite site, a rash, and lymphadenopathy.1 The disease is an important cause of acute undifferentiated fever in rural Asia, northern Australia, and the Western Pacific islands.2 It accounts for up to 23% of all febrile episodes in the endemic areas of the Asia-Pacific region.3 Scrub typhus has long been recognized to occur in southern China and is now being increasingly often described from the north since the first case reported in Mengyin County, Shandong Province, in 1986.4–7 In comparison with the severe and typical clinical manifestations of the disease in southern China, the scrub typhus in the north is relatively mild and self-limiting. Therefore, the disease in northern China is often regarded as mild or atypical scrub typhus.4,5 Diagnosis of scrub typhus is generally based on clinical manifestations and environmental exposure history.1–3 However, distinguishing diagnosis of scrub typhus from other acute undifferentiated fever illnesses, such as leptospirosis, murine typhus, malaria, dengue fever, and viral hemorrhagic fevers, is usually difficult because of their similar manifestations.8–11

Hemorrhagic fever with renal syndrome (HFRS) is a rodent-borne disease caused by Hantavirus, with characteristics of fever, hemorrhage, kidney damage, and hypotension.12–14 China is the most severe endemic area of HFRS in the world, with 30,000–50,000 cases reported annually, which account for > 90% of total numbers worldwide.15,16 Shandong Province is the most severely affected province in China. Most patients with HFRS in the province are caused by Seoul type Hantavirus, and the disease usually occurs in spring and autumn-winter season with two incidence peaks.14–17

From September to December of each year, both scrub typhus and HFRS are frequently reported in many rural areas of northern China, including Shandong Province, and often lead to acute undifferentiated fever.4,5,11,14–16 In addition, the two diseases are mainly associated with adult farmers.4,5,16 Clinically, it is difficult to distinguish both diseases at the early stages of illness because of their primary symptom similarities, and consequently, physicians often confuse them.4,11 To obtain simple and useful indices for distinguishing scrub typhus and HFRS at the early stage, we collected and compared the clinical and routine laboratory data at the time of admission to hospitals from the patients with serologically confirmed scrub typhus or HFRS in Shandong Province of northern China.

This study was conducted in Feixian County, Shandong Province, where both scrub typhus and HFRS are highly prevalent and often cause acute undifferentiated fever illness during autumn-winter seasons. From September to December of 2002–2004, adult patients (≥ 16 years old) with acute undifferentiated fever who presented to three town hospitals in northeastern Feixian County were considered. All the patients were farmers living in the countryside. During September to December every year, the farmers often work for long times in the crop field to gain peanuts, pachyrhizus, and cotton, and to grow wheat. Thus they have many opportunities to be exposed to rodents and chigger mites in the field. In addition, they might catch infection by eating food or drinking water contaminated by rodent excretes and body fluids. After informed consent was obtained, 5 mL acute stage blood and urine were collected from each patient for routine laboratory examination. The febrile patients who had clinical manifestations, laboratory tests, and epidemiologic histories indicative of scrub typhus or HFRS were enrolled in the study. Briefly, the clinical manifestations included acute fever, headache, retro-orbital pain, lumbar back pain and flank tenderness, erythematous flushes on the face, neck, and upper bosom, hemorrhage on skin and mucosa, eschars, and maculopapular rashes on the trunk and proximal limbs. The laboratory abnormalities concerned results suggestive of the two diseases, such as thrombocytopenia, proteinuria, and occult blood in urine. Epidemiologic exposure histories indicating that patients had worked in crop fields, been in contact with rodents, and eaten food or drunk water contaminated by rodents were also enrollment criteria. For suspected scrub typhus, chloramphenicol was administered orally at a dosage of 1.5–2.5 g, four times a day, for 4–5 days. Most of the patients with scrub typhus defervesced within 2 days after the treatment. For suspected HFRS, vigorous supportive treatment was given. In addition, intravenous ribavirin (750–1000 mg/d) for 5–7 days was given. Two to 4 weeks later after onset of treatment, 5 mL convalescent stage blood was also collected. Serum specimens were separated by centrifugation at 2,500g for 10 minutes and kept at −20°C until use. Febrile patients who had no clinical manifestations, routine laboratory examinations, or epidemiologic exposure histories indicative of scrub typhus or HFRS were excluded from the study. Patients with a history of known chronic medical problems or illness were also excluded. The study was approved by the Ethical and Scientific Review Subcommittee of the China Ministry of Public Health.

Statistical analyses were performed using the χ2 test (or Fisher exact test) for categorical percentages and Mann-Whitney U test for continuous variables. A difference was considered statistically significant if P < 0.05. Ranges were indicated by interquartile range (IQR).

During the 12-month study period, a total of 130 patients with acute undifferentiated fever were assessed. Forty-six were diagnosed as scrub typhus, and one of them died. This patient, who was 70 years old, was initially misdiagnosed and treated as HFRS by country infirmary. He was sent to Shangye town hospital with serious multiple system organ failure and eventually died after all efforts for rescuing him failed. Forty-nine patients were diagnosed as HFRS, and two of them died. Both of them were older than 70 years of age, and they were first misdiagnosed as having a common cold by the country infirmary and delivered to Shangye town hospital with severe shock. Thirty-five patients were identified as neither scrub typhus nor HFRS by serologic or PCR tests and were excluded from the study.

IFA, ELISA, PCR, and other tests are recognized as sensitive and effective methods for early diagnosis and distinguishing scrub typhus from HFRS.4,15,18,20 However, these diagnostic tests are usually not available in town hospitals located in rural and undeveloped areas of China. Physicians working in these places have to distinguish scrub typhus from HFRS only according to clinical manifestations, routine laboratory examinations, and exposure histories. If physicians are not familiar with the differences of early clinical and routine laboratory characteristics between scrub typhus and HFRS, misdiagnosis of the two diseases often occurs.4,11,15 By comparing and analyzing the early clinical and routine laboratory data of 46 patients with confirmed scrub typhus and 49 patients with confirmed HFRS, this study identified the following differences between the two diseases. Most patients with HFRS but none of the patients with scrub typhus had hemorrhagic manifestations; retro-orbital pain, lumbar back pain, flank tenderness, proteinuria, and occult blood in urine more often occurred in the patients with HFRS; skin eschar, regional lymphadenopathy, and maculopapular rash mainly appeared in patients with scrub typhus; obvious thrombocytopenia was mainly observed in patients with HFRS. These findings will be useful for physicians working in the rural and undeveloped areas to correctly distinguish the two diseases at an early stage.

Previous studies have shown that alanine aminotransferase (ALT), serum creatinine, and blood urea nitrogen (BUN) were always normal in patients with uncomplicated scrub typhus but would be expected to be raised in quite a bit in patients with HFRS.4,15 Because of economic reasons, most farmer patients were unwilling to pay for any more biochemical tests than simple blood routine tests. Therefore, unfortunately, serum creatinine was not tested in this study.

Early diagnosis of scrub typhus often depends on recognition of the eschar, rash, and exposure history of the patient.21 Within 2 days after the chigger feeds, a skin papule appears that slowly becomes a small bulla that sloughs to leave a flat shallow ulcer. By the time the patient is symptomatic, the ulcer is covered with a black eschar 1–2 cm in diameter. The chigger has a predilection for attacking secrete and moist sites of human body, such as groin, scrotum, axillae, etc. However, in moist skin folds, the eschars may be absent.22 Previous studies from different new epidemic areas in northern China showed that the percentages of patients with scrub typhus with eschars varied from 15% to 100%.4,23 In our study, 67% (31/46) of patients with scrub typhus had eschars. However, this is quite a bit higher than the usually reported figure. The reason may be that the physicians in our study team have worked there for many years and are very familiar with eschars. In addition, we carried out a thorough body examination for every patient with acute fever, and no eschar was neglected from the patients with suspected scrub typhus.

Initial manifestations of scrub typhus may mimic a variety of febrile illnesses. Dengue fever, leptospirosis, malaria, HFRS and other diseases that cause acute undifferentiated fevers in Asia are often difficult to distinguish from each other.4,8–11,15 The clinical manifestations of dengue fever can be similar to that of scrub typhus and even more so to HFRS. However, dengue fever mainly occurs in southern China, such as Guangdong, Hainan, and Guangxi Province. This disease was not found until now in the studied area.25 Leptospirosis is also mainly present in the south and drainage areas of the Yangtse River, and it has occurred only sporadically in the Shandong Province.26 Malaria was seriously epidemic ~30 years ago in China, including the studied area.27 Through intensive control efforts, very few leptospirosis cases have occurred, and malaria was basically eradicated from the Shandong Province.26,27 During our study period, neither leptospirosis nor malaria was diagnosed in the area. However, when facing a patient with acute undifferentiated fever, the physicians should still consider these diseases with similar clinical manifestations and exclude each option one by one according to their clinical characteristics and serologic test.

Previous studies have reported that Apodemus agrarius, Cricetulus triton, and Rattus norvegicus are the common rodent hosts of both scrub typhus and HFRS in the studied area.7,28,29 Therefore, we assumed that dual infections of scrub typhus and HFRS may exist. However, from 1995 until now, no patients with co-infections have been found. The reasons are unclear and need to be further studied.

Our findings about the differences of early clinical and routine laboratory characteristics between HFRS and scrub typhus can help physicians to make an early treatment decision. It is well known that most patients with scrub typhus usually have a favorable prognosis if they are treated in a timely fashion with proper antibiotics. However, some patients may develop serious complications such as disseminated intravascular coagulation (DIC) and multiple organ failure, particularly if adequate therapy is delayed.1–4 In this study, one patients with scrub typhus who was misdiagnosed as HFRS died of multiple organ failure. Early diagnosis of scrub typhus permits proper treatment using effective medicines such as doxy-cycline, chloramphenicol, and tetracycline, which rapidly recuperates the patient’s health.1,4 Although there is no specific antiviral therapy for HFRS until now, earlier diagnosis, earlier admission to an intensive care unit, and earlier management with antiviral drug could reduce the fatality rate of HFRS.15,30

In conclusion, this study reported the differences of clinical manifestations and outcomes of routine laboratory examinations between patients with scrub typhus and HFRS. These findings will provide insights for physicians working in the areas where both diseases are epidemic to distinguish them correctly.