Flowchart describing the results of the in vivo efficacy trial in 2004 in Pailin, Cambodia.

The percentage of subjects who have not recrudesced after artesunate-mefloquine treatment by A, pfmdr1 copy number and B, pfmdr1 haplotype. In B, only samples with haplotypes I, III, and IV were included. The haplotypes are defined in Table 2. 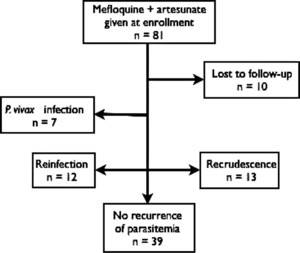 Artemisinin combination therapies (ACTs) have recently been adopted as first-line therapy for Plasmodium falciparum infections in most malaria-endemic countries. In this study, we estimated the association between artesunate-mefloquine therapy failure and genetic changes in the putative transporter, pfmdr1. Blood samples were acquired from 80 patients enrolled in an 2004 in vivo efficacy study in Pailin, Cambodia, and genotyped for pfmdr1 copy number and haplotype. Having parasites with three or more copies of pfmdr1 before treatment was strongly associated with recrudescence (hazard ratio [HR] = 8.30; 95% CI: 2.60–26.43). This relationship was maintained when controlling for initial parasite density and hematocrit (HR = 7.91; 95% CI: 2.38–26.29). Artesunate-mefloquine treatment selected for increased pfmdr1 copy number, because isolates from recurrent episodes had higher copy numbers than the paired enrollment samples (Wilcoxon rank test, P = 0.040). pfmdr1 copy number should be evaluated further as a surveillance tool for artesunate-mefloquine resistance in Cambodia.