Incidence of leptospirosis per 10,000 population (1998–2003) by subdistrict, Kamphaeng Phet Province, Thailand. Predominant reacting serovars seen were Bratislava, Autumnalis, and Icterohaemorrhagiae with 24 cases in Muang District. This figure appears in color at www.ajtmh.org. 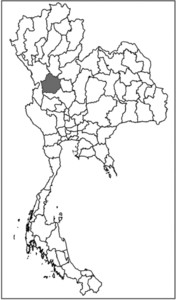 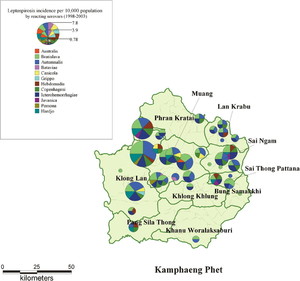 Leptospirosis, which is caused by pathogenic spirochetes of the genus Leptospira, is a zoonotic disease of global importance and an emerging health problem. We studied patients suspected of having leptospirosis in Kamphaeng Phet Province, Thailand. Of 106 patients with suspected leptospirosis evaluated at the provincial hospital, 69 (65%) were confirmed positive (titer ≥ 1:800 or ≥ 4-fold increase in titer) by microscopic agglutination testing. Seventy-seven percent (53) of the cases occurred during the rainy season (June through November). Sera reacted predominantly with Bratislava, Autumnalis, and Icterohaemorrhagiae serovars. The screening Leptospira Dip-S-Ticks test had poor sensitivity (32%) but a specificity of 100% compared with a Leptospira IgM enzyme-linked immunosorbent assay. Leptospirosis was found to be a frequently confirmed cause of morbidity in Kamphaeng Phet Province in those suspected of having the illness.

Leptospirosis is a widespread zoonotic disease; epidemics have been reported from many parts of the world including recent outbreaks in Southeast Asia and South and Central America.1 The pathogenic spirochetes are shed in the urine of host animals. Human infection can occur after contact with contaminated water or with urine or tissues of infected animals. Occupations at greatest risk for infection include farmers, abattoir workers, sewer workers, and miners.1 Recreational activities are increasingly recognized as risk factors for leptospirosis,2 as is exposure in regions with high seasonal rainfall.3 Leptospirosis varies in severity from mild flu-like illness to severe and fatal forms, but there is no significant association between any particular leptospiral serovars and clinical outcome.3,4 Although the real-time quantitative polymerase chain reaction recently developed is promising,5 it is not standardized and serology continues to be the mainstay of diagnosis for leptospirosis. Microscopic agglutination testing (MAT), the reference serodiagnostic test, may not be helpful in identifying the infecting serovar in individual cases, but is useful in predicting serogroups present within a population.6

In Thailand, leptospirosis is a reportable disease and is most commonly seen during the rainy season.7,8 There was a drastic increase in reported leptospirosis between 1995 and 2003, with a peak in 2000.8 Studies reported that the use of protective clothing including boots decreased the risk, and the presence of skin wounds increased the risk for infection.7

Many serovars of leptospirosis have been found in humans in Thailand. Investigations in the late 1990s indicate that Bratislava, Autumnalis, Pyrogenes, and Sejroe had the most serologic reactivity by MAT,9 a shift from the 1980s when Bataviae and Icterohaemorrhagiae were most common.10,11 There has been no accurate estimate of the burden of leptospirosis or the circulating serovars in Kamphaeng Phet Province.

Leptospirosis is a frequently missed diagnosis because the clinical symptoms of leptospirosis infection are easily confused with those of other diseases common in northern Thailand, including influenza, dengue, and viral hepatitis.12 The aim of this study was to determine the circulating serovars, to evaluate diagnostic kits in the field, and to educate physicians and residents of Kamphaeng Phet Province about leptospirosis. The geographic information system (GIS) databases have been recently used to identify transmission areas and possible ecologic components of leptospirosis transmission in Brazil.13–15 In this study we used GIS databases to better understand the spatial distribution of leptospirosis in Kamphaeng Phet Province.

Kamphaeng Phet Province, which has an area of 8,608 km2, is located approximately 358 km north of Bangkok (Figure 1). The population of Kamphaeng Phet Province is approximately 750,000.16,17 More than 75% of the people work in the agricultural sector, and nearly 60% of the land of the province is used for agriculture. Passive surveillance for leptospirosis was conducted at Kamphaeng Phet Province Provincial Hospital from 1998 to 2003 as a public health service. The study was reviewed and approved by the Thai Ministry of Public Health and the Walter Reed Army Institute of Research Institutional Review Board. The results of this study were not used to actively manage patients.

Suspected cases were identified by attending physicians based on medical history, physical examination, and routine clinical laboratory tests. Paired or single sera was collected from each patient; the first sera (S1) was drawn soon after admission and the second sera (S2) at convalescence. Information on demographics, occupation, clinical manifestations, and community of residence for mapping were obtained from inpatient hospital records.

Most patients with clinically suspected leptospirosis were tested with Leptospira DipS-Ticks® (PanBio InDx Inc., Baltimore, MD) at Kamphaeng Phet Province Provincial Hospital to detect IgM antibodies for Leptospira antigens according to the manufacturer’s instructions. The dipstick uses a broadly reactive, non-serovar specific antigen for detecting IgM antibodies. The results were scored based on the color intensity of the antigen band with scores ranging from 0 to 4. Results were considered positive if the staining intensity was ≥ 2 as per manufacturer’s instructions. Regardless of the dipstick availability or results, all specimens, after depersonalization, were also evaluated for the presence of IgM antibodies using the Leptospira IgM enzyme-linked immunosorbent assay (PanBio Inc., Brisbane, Queensland, Australia) at the Armed Forces Research Institute of Medical Sciences according to the manufacturer’s instructions.18 Sera with a titer > 11 PanBio units was considered positive and 9–11 PanBio units as equivocal. Confirmatory MAT was performed on both S1 and S2 if either was determined to be positive or equivocal. The MAT was performed at the Veterinary Command Food Analysis and Diagnostic Laboratory in Texas using a battery of 24 serovars from 20 serogroups selected specifically for use in Southeast Asia. A reactive antibody titer ≥ 1:800 (suggested cut-off for disease-endemic areas)19 from a single serum sample or a four-fold or greater increase in paired serum samples in clinically compatible cases were classified as confirmed leptospirosis. A clinically compatible case with supportive serologic findings (MAT titer ≥ 1:400 in one or more serum specimens) was considered as probable.20 These probable cases were not included in the statistical analyses.

The cases confirmed by MAT were mapped using MapInfo software (MapInfo, Troy, NY) to better understand the spatial distribution of leptospirosis in Kamphaeng Phet Province. The province was divided into 78 communities within its 11 districts. The residence of each case was mapped at the community level.

If a patient’s sample was positive at S1 or S2 by ELISA, all of those patient’s samples were forwarded for MAT testing. Thus, we had ELISA-negative samples as well as ELISA-positive samples that allowed (with selection bias) a determination of sensitivity and specificity of the ELISA against confirmed (MAT titer ≥ 800) cases (Table 1).

Of the 66 MAT confirmed cases for whom both age and sex data were available, 57 were males (86%), 9 were females (14%), and the mean age was 33 years (range = 5–83 years). A total of 44% and 40% of those with confirmed leptospirosis were farmers and agricultural workers, respectively. The occurrence of leptospirosis was highest in November. Most patients had fever (88%), headache (53%), and malaise (49%). Myalgia was seen in 27% and conjuctival suffusion was seen in 17%. The leptospirosis incidence by district ranged from 0.41 to 3.96/10,000 population (Figure 2). The highest incidence occurred in the eastern districts of Kamphaeng Phet Province. Patient sera reacted predominantly with the Bratislava, Autumnalis, and Icterohaemorrhagiae serovars, but reaction with the Australis, Bataviae, Canicola, Grippotyphosa, Hebdomadis, Copenhageni, Javanica, Pomona, and Hardjo serovars was also observed.

Leptospirosis was confirmed in 65% of suspected cases over a five-year period, which suggested that it is a frequent cause of morbidity in the region. Confirmation by MAT required a second serum sample in 29% (n = 20) of the cases. The disease predominately occurred during the rainy season with sera that reacted predominately with the Bratislava, Autumnalis, and Icterohaemorrhagiae serovars. Screening with Leptospira Dip-S-Ticks had poor sensitivity but 100% specificity when compared with the Leptospira IgM ELISA.

Testing with the PanBio IgM ELISA showed that the mean IgM titer for S1 in confirmed leptospirosis cases was 34 units, but was as low as 3.3. If the manufacturer’s cut-off of 11 PanBio Units is modified to ≥ 18 to accurately diagnose acute leptospirosis in disease-endemic areas such as Kamphaeng Phet Province, as suggested by an earlier study done in Thailand,20 the specificity improves from 22% to 52% compared with an MAT titer ≥ 1:800 and from 20% to 63% for definitive and probable cases (MAT titer ≥ 1:400); but sensitivity decreases from 91% to 81% and from 91% to 72%, respectively.

The concordance of 45% (51% at S1 and 38% at S2) between the ELISA and dipstick was in contrast to previous reports in which the two assays were considered to have comparable sensitivities.21,22 In this study, the dipstick added no additional confirmed positive cases to the ELISA results. Because there was a selection bias with respect to MAT testing, we cannot determine if the dipstick results would have had a better sensitivity compared with the ELISA. One additional limitation is that testing of the ELISA and dipstick was performed in different laboratories.

The MAT showed that reacting serovars in Kamphaeng Phet Province are similar to the rest of Thailand, with Bratislava and Autumnalis predominanting.9 The disease was most prevalent in the eastern borders of Kamphaeng Phet Province. We could not speculate on reservoirs and sources of infection as animal surveys especially seroprevalence studies in rodents and dogs have not been done in these areas. The predominant clinical manifestations of fever, headache, and muscle tenderness among the confirmed cases were similar to that of previous studies. Environmental and risk assessment as well as transmission patterns of the cases should be determined for Kamphaeng Phet Province. This could be established through well designed prospective studies with more rigorous testing to modify management algorithms of febrile illnesses in this region. In our study, leptospirosis was more common in males. The low numbers of women and children infected with leptospirosis suggests that household exposure and peridomiciliary contact do not play a significant role in leptospirosis infection in Kamphaeng Phet Province. The high incidence of leptospirosis in farmers and agricultural workers suggests occupational exposure as the major associated risk. There was an increase in the number of cases of leptospirosis during the rainy season (June–October). In some years, cases began appearing as early as March and April. The occurrence of cases before the rainy season may be attributed to the harvesting of sugarcane during these months.

Although reported cases of leptospirosis in Thailand have markedly increased since the last decade,8 leptospirosis remains under-reported because of a lack of laboratory and surveillance capabilities. Our study involved only selected cases with a high index of suspicion of leptospirosis, but confirming more than two-thirds of these cases suggests that screening in less-suspected cases will lead to a better assessment of the disease burden in Kamphaeng Phet Province. Further studies are warranted to define the epidemiology, clinical disease, environmental and risk factors for Kamphaeng Phet Province, as well as to better characterize infecting serovars through active culturing.