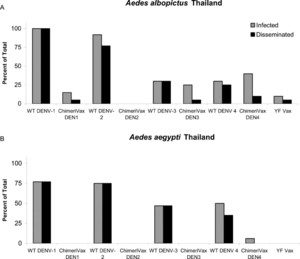 Four chimeric yellow fever (YF) 17D-dengue (DEN) candidate vaccine viruses (ChimeriVax™-DEN; Acambis, Cambridge, MA) were characterized in Aedes aegypti and Ae. albopictus mosquitoes collected from Thailand. The four vaccine viruses contained the relevant prM and E genes of wild-type dengue viruses (DENV; serotypes 1–4) substituted for the equivalent genes in the YF vaccine virus (17D) backbone. Each chimera conferred protection against the homologous DENV serotype; a tetravalent mix of all four chimeras stimulates an immune response against all serotypes. Field-collected mosquitoes from Thailand were fed on blood containing each of the viruses under study and held 21 days after infection. Infection and dissemination rates were based on antigen detection in the body or head tissues, respectively. All four wild-type DENV serotypes infected and disseminated, but the candidate vaccine viruses were highly attenuated in mosquitoes with respect to infection and especially with respect to dissemination. Considering the low level viremias anticipated in humans vaccinated with these viruses, it is predicted that the risks of infection and transmission by mosquitoes in nature is minimal.