Detection of antibodies to Burkholderia pseudomallei by indirect hemagglutination assay (IHA) in 968 adults resident in Myanmar. 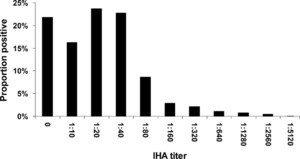 MELIOIDOSIS IN MYANMAR: FORGOTTEN BUT NOT GONE?

A serologic survey of adults resident in Myanmar was conducted to define the presence of antibodies to Burkholderia pseudomallei, the cause of melioidosis. Antibodies were detectable by indirect hemagglutination assay (IHA) in 757 (78%) of 968 adults, of whom 69 (7%) had an IHA titer ≥0.

Burkholderia pseudomallei is the cause of melioidosis, a severe and often fatal human infection.1,2 This organism is present in the environment over a large area of the Far East, where infection is acquired after bacterial inoculation or inhalation.2,3 Melioidosis shows a wide range of clinical manifestations, and diagnostic confirmation depends upon isolation of B. pseudomallei from clinical specimens.4,5 Serologic testing has low diagnostic specificity for melioidosis in the disease-endemic setting, where the rate of background seropositivity in the healthy population is high.6,7 However, seroprevalence studies provide evidence for exposure of a given population to B. pseudomallei, and may act as a crude indicator of the risk of infection.

The first reported case of melioidosis occurred in a 40-year-old morphine addict in Rangoon (Yangon), Burma (Myanmar) in 1911. The diagnosis was made on the basis of a postmortem examination and supported by careful microbiologic investigation.8,9 By 1917, more than 100 cases had been reported in Rangoon, accounting for 5% of all post-mortem examinations.10 Cases of indigenous disease in Burma (Myanmar) have not been reported in the literature since 1945,2 but it is likely that melioidosis continues to occur. This is supported by a more recent case report of melioidosis in a traveler returning from Myanmar.11 The aim of this study was to define the rate of seropositivity in a group of adult migrant workers entering Thailand from Myanmar, and to confirm that exposure to B. pseudomallei continues unabated.

A prospective, cross-sectional study was conducted between June and July 2005 during which unselected consecutive serum samples from adult migrant workers who came to Mae Sot Hospital in Tak, Thailand for a pre-employment medical examination were collected from the biochemistry department. An anonymous database was created to record sex, age, occupation (defined as agricultural or non-agricultural), and region (division or state) of residence. The presence and titer of antibodies to B. pseudomallei were defined using the indirect hemagglutination assay (IHA) as previously described,12 using pooled antigens prepared from B. pseudomallei clinical isolates 199a and 207a cultured from patients with melioidosis in northeast Thailand. Any detectable IHA titer was interpreted as evidence of exposure to B. pseudomallei. Statistical analysis was performed using the statistical program Intercooled Stata version 8.0 (Stata Corporation, College Station, TX). Data are presented using median and inter-quartile range and analyzed using the Mann-Whitney U test or Kruskal-Wallis test. Ethical approval for this study was obtained from the Faculty of Tropical Medicine, Mahidol University, Bangkok, Thailand.

Serologic surveys indicate that a high proportion of the population resident within melioidosis-endemic areas develop an antibody response to B. pseudomallei. In Thailand, the proportion with any detectable response as defined by the IHA is comparable for resident populations in areas of high and low endemicity for melioidosis. For example, the proportion of children in highly endemic northeast Thailand (incidence of melioidosis = 137.9/100,000 hospital admissions13) with detectable antibodies to B. pseudomallei increases sharply in the first four years of life, after which at least 60% of the population are antibody positive.7 The background seropositivity rate in healthy individuals in low endemicity areas such as southern Thailand (incidence of melioidosis = 14.4/100,000 hospital admissions13) is comparable at approximately 58%.14 However, the proportion with a high titer (defined as ≥ 1:160) is different between the two regions; 33% of adult patients admitted to a hospital in northeast Thailand with a diagnosis other than melioidosis had IHA titers ≥ 1:160 compared with 7–10% coming to a hospital in southern Thailand.14 In light of these observations, it is possible that the proportion of the population with an IHA titer ≥ 1:160 who do not have clinical manifestations of melioidosis represents an indirect indication of disease frequency.

The rate of seropositivity for the population of Myanmar adults in this study indicates that exposure to B. pseudomallei is common. A detailed travel history was not obtained and it is possible that exposure occurred elsewhere. However, most were not actively engaged in occupations in Thailand associated with environmental exposure. We suggest that exposure has predominantly occurred within Myanmar; this is consistent with historical records detailing cases of melioidosis in Yangon.8–10 The current incidence rate of melioidosis in Myanmar is unknown. The proportion of adults in this study with an IHA titer ≥ 1:160 is comparable to that for low endemicity areas of Thailand, but historical records are more in keeping with high endemicity. We propose that melioidosis remains a significant human pathogen in Myanmar, but delineation of the true incidence awaits the introduction of diagnostic culture for individuals with suspected disease.