Left: map of Brazil with political division; Right: Amplification of the hachurated area of the left panel with main routes (in dark grey). “A” correspond to Teresina (Capital of Piauí state), “B” is Fortaleza (Capital of Ceará state), and “C” is São Lú is (Capital of Maranhão state). Number 1 corresponds to the study area—Piracuruca region, 2 and 3 correspond to touristic areas; “Sete Cidades” National Park and Parnaíba River’s Delta.

A, General view of Cocal dos Alves city, with pigs roaming freely in the main avenue; B, Pig positive at tongue inspection; C, Dorsal muscles full of cysts at pig’s necropsy; D, Cysts in a detail of C. This figure appears in color at www.ajtmh.org. 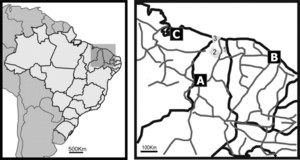 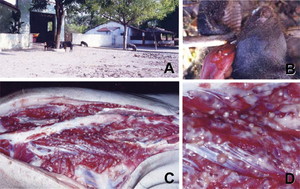 EVIDENCE AND POTENTIAL FOR TRANSMISSION OF HUMAN AND SWINE TAENIA SOLIUM CYSTICERCOSIS IN THE PIRACURUCA REGION, PIAUÍ, BRAZIL

The study conducted in the Cocal dos Alves municipality, located in the Piracuruca region of Piauí State, Brazil in November of 2003 was based on both a socio-behavioral survey and analysis of serum antibodies and parasitic materials. Pig raising is the main economic activity with 91.4% using extensive farming. On the studied population, 54.3% of people did not apply any sanitary measures to wastewater, 45.7% used septic tanks, and 69.1% consumed water without treatment. The data collected indicated the occurrence and active transmission of the taeniasis-cysticercosis complex in the region. One of seven voluntary persons was positive in antibody-ELISA tests using both native and recombinant antigens. Multiplex PCR and DNA sequencing of cyst samples obtained from a pig revealed the presence of the Afro-American genotype of Taenia solium. This study revealed the occurrence of human and porcine cysticercosis in the Piracuruca region of Piauí State, middle-north of Brazil.