Informed consent was obtained for all study subjects before clinical and parasitological study and blood collection. This study was approved by the Human Investigation Committees of University Hospitals and the Oswaldo Cruz Foundation, Salvador, Bahia, Brazil. Geometric mean egg counts (epg) according to infection status at the 6- and 12-month interventions. The study population was retrospectively stratified according to their infection status at 6 and 12 months and the geometric mean epg of each group calculated. Thus, those infected still infected at 6 months started the study with a statistically higher epg (77.9) than those who were egg negative (64.4) at 6 months (P = 0.023).

Geometric mean egg counts (epg) according to infection status comparing the 12-month intervention only. The study population was retrospectively stratified according to their infection status at 12 months and the geometric mean of each group calculated. Thus, the starting epg of those who would eventually be egg negative at the end of 12 months (99.8) were well separated from than those who were egg negative (69.0) at 12 months (P = 0.020). 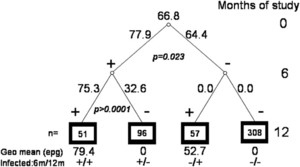 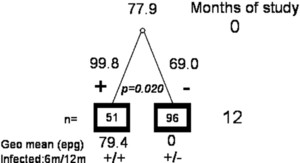 Most Schistosoma mansoni infections are egg-negative after a single dose of oxamniquine. A cohort of 661 infected children was treated at 6-month intervals and assessed for nutritional and parasitological status. Initial biochemical and immunologic markers were measured in a subset of 84 children. All were treated at the start of therapy and at 6 months. Immunoglobulins only served as markers for active infection. No markers were predictive of cure or reinfection, except initial infection intensity and serum low-density lipoprotein. Ten percent were persistently infected and had no change in infection intensity at any time-point. Several factors suggest that this group was biologically different. In addition to failing to reduce their worm burden, they had significantly higher initial intensity of infection (100 versus 65 eggs/g, P = 0.001) and significantly lower initial serum low-density lipoprotein (72 versus 104 mg/dL, P = 0.045). The biologic plausibility of this observation is discussed.