Cystatin C in VL and PKDL. The significant differences between VL and the other two groups are indicated on the figure.

Cystatin C in acute and subacute forms of VL. The significant difference between the populations is indicated on the figure. 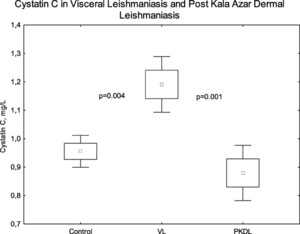 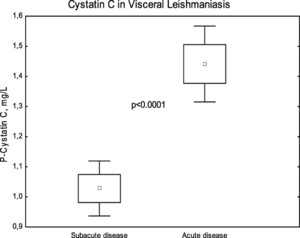 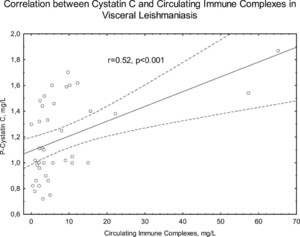 Renal function was studied in visceral leishmaniasis (VL) and post-kala-azar dermal leishmaniasis (PKDL) by means of the specific marker cystatin C and related to circulating immune complexes and cytokine production. Forty patients with VL (23 with sub-acute disease and 17 with acute disease), 17 patients with PKDL, and 22 healthy controls were included. Cystatin C, but not creatinine, was significantly raised in VL (P = 0.004). The highest levels of cystatin C were found in those with acute disease (P < 0.0001). In VL, cystatin C levels were positively correlated to circulating immune complexes and production of granulocyte-macrophage colony stimulating factor (GM-CSF), but negatively correlated to aspartate aminotransferase and lactate dehydrogenase. We conclude that cystatin C is a superior marker of glomerular function in leishmaniasis and that immune complex deposition and GM-CSF are two functions that most likely are causally involved in the mechanisms leading to glomerular dysfunction in leishmaniasis.