Total radioactivity (ng equivalents per ml) of [14C] artesunate in whole blood (dashed line with triangular markers) and in plasma (solid line with circular markers), and plasma concentration of unchanged artesunate (AS) (dotted line with dot makers in re-plot) and unchanged dihydroartemisinin (DHA, dashed line empty circle in re-plot) following a single 5 mg/20 μCi/kg intravenous injection of [14C] AS in rats (N = 6). This figure appears in color at www.ajtmh.org.

Mean distribution profile of total radioactivity (ng equivalents per gram tissue) of radiolabeled artesunate (AS) in various tissues (column) at 1, 6, 24, 48, 72, 96, and 192 hours following a single 5 mg/20 μCi/kg intravenous injection of [14C]AS in rats (n = 5). This figure appears in color at www.ajtmh.org.

Metabolic patterns (solid line) of radiolabel distribution with standard references (dotted line) of alpha-dihydroartemisinin (α-DHA), β-dihydroartemisinin (β-DHA), and artesunate (AS) in plasma free fraction at 1 min (A), 5 min (B), plasma glucuronidate conjugation fraction at 5 min (C), and urine glucuronidate conjugation fraction at 8 hr (D) after single intravenous injection at dose of 5 mg/20μCi/kg of [14C]AS in rats displayed together in radiochromatography. 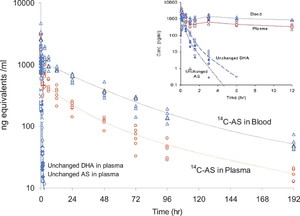 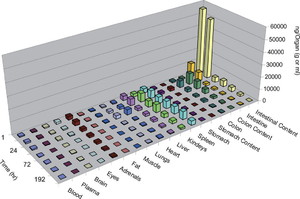 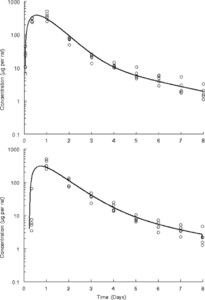 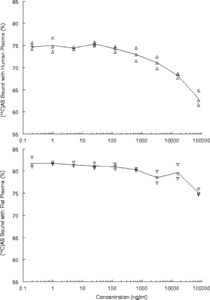 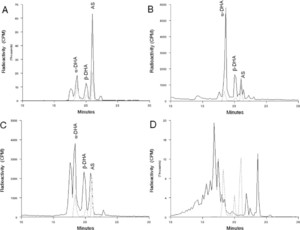 The present study reports the tissue distribution, pharmacokinetics, mass balance, and elimination of [14C] artesunate (AS) following single intravenous administration in rats. Protein binding was performed with rat and human plasma. Radioactivity and drug levels in blood, plasma, tissues, urine, and feces up to 192 hours were collected and measured. The mean terminal half-life of plasma (76 h) and blood (105 h) radioactivity was prolonged compared with that of unchanged AS (0.43 h) and dihydroartemisinin (0.75 h), an active metabolite of AS. Drug was widely distributed after 1 hour in select tissues. After 24 hours, the radioactivity rapidly declined in all tissues except spleen until 96 hours. Only 1% of total radioactivity was detected in brain tissue. AS revealed a higher binding capacity with human and rat plasma proteins (73–81%). The radioactivity in whole blood was higher (two to fourfold) than that in plasma throughout the period of the treatment, suggesting that AS binding to RBCs may relate to its powerful antimalarial activity.