RBV at 35 mg/kg/day is not toxic in suckling mice. Groups of Swiss mice were treated daily with placebo or 45 or 35 mg/kg of RBV, for 10 consecutive days. Treatment was initiated on 2-day-old mice (black arrow) and was maintained for 10 days. The animals were weighed before treatment and daily for 10 days. Values represent the mean of mouse weights of each group. *P < 0.05 compared with placebo-treated mice. Similar results were obtained in a second experiment.

RBV-treated and placebo-treated mice present similar virus titers in the brain. Groups of 16 three-day-old Swiss mice were infected intraperitoneally with OROV, CARV, GMAV, GROV, or TCMV, and they were treated intraperitoneally with RBV (35 mg/kg/day) or placebo. Treatment was initiated 24 hours before infection and maintained each every day. Mouse brains (two mice per group) were taken on days 1, 2, 3, 5, 7, and 9 after infection. Virus titer in the brain was measured by plaque assay. Scale bars represent the mean ± SD of PFU/mL. Similar results were obtained in a second experiment. 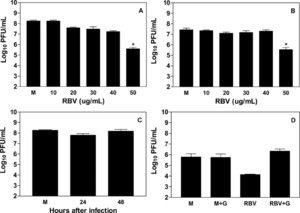 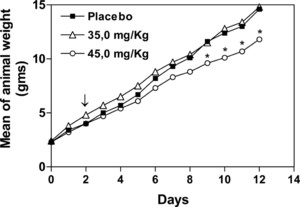 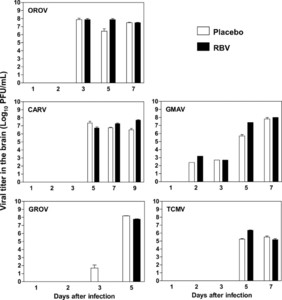 Oropouche, Caraparu, Guama, Guaroa, and Tacaiuma are viruses (genus Orthobunyavirus) that cause human febrile illnesses and encephalitis. The goal of this study was to evaluate the antiviral action of ribavirin on these orthobunyaviruses to achieve a therapeutical agent to treat the diseases caused by these viruses. In vitro results showed that ribavirin (50 μg/mL) had antiviral activity only on the Tacaiuma virus. Addition of guanosine in the culture reversed the antiviral effect of ribavirin on Tacaiuma virus, suggesting that ribavirin inhibited this virus by reducing the intra-cellular guanosine pool. Moreover, ribavirin was not an effective drug in vivo because it was unable to inhibit the death of the mice or virus replication in the brain. The results suggest that ribavirin has no antiviral activity on the Oropouche, Caraparu, Guama, Guaroa, or Tacaiuma viruses; consequently, ribavirin would not be a good therapeutical agent to treat these arboviruses.