Map of Brazil and Paraguay in South America. The lower map is from the American continent. The year of the first detection of dengue virus type 3 is indicated for each country. 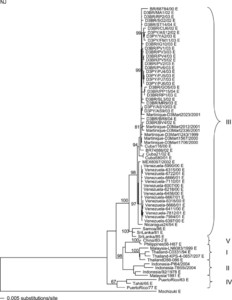 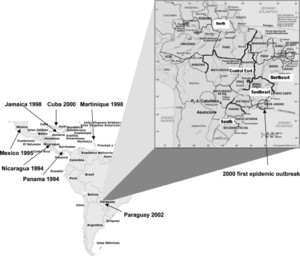 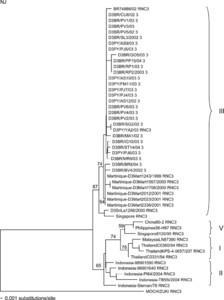 MOLECULAR EPIDEMIOLOGY OF DENGUE TYPE 3 VIRUS IN BRAZIL AND PARAGUAY, 2002–2004

We studied the molecular epidemiology of dengue virus type 3 (DENV-3) in Brazil and Paraguay by analyzing the 5′ and 3′ untranslated regions (5′ and 3′UTRs) and the E protein gene of viruses isolated between 2002 and 2004. Both 5′ and 3′UTRs were highly conserved. However, the 3′UTR of two isolates from Brazil contained eight nucleotide deletions compared with the remaining 26 viruses. Phylogenetic analyses suggested that DENV-3 was introduced into Brazil from the Caribbean Islands at least twice and into Paraguay from Brazil at least three times.

Dengue viruses (DENVs), which belong to the genus Flavivirus, family Flaviviridae, comprise four antigenically related, but genetically distinct, viruses named dengue virus types 1, 2, 3, and 4 (DENV−1, −2, −3, and −4). Infection with any of these serotypes leads to a broad clinical spectrum, ranging from sub-clinical infection or an influenza-like disease known as dengue fever (DF) to a severe, sometimes fatal disease characterized by hemorrhage and shock, known as dengue hemorrhagic fever/dengue shock syndrome (DHF/DSS). DENVs are transmitted to humans mainly by the bites of Aedes aegypti and Aedes albopictus mosquitoes. Dengue is the most important arthropod-borne virus in tropical and subtropical countries, with an estimated 50 million infections each year, resulting in 500,000 cases of DHF/DSS and 25,000 deaths.1,2

Like other flaviviruses, dengue virus has a single-stranded, positive-sense RNA genome of ~10,700 nucleotides, surrounded by a nucleocapsid and covered by a lipid envelope that contains the viral glycoproteins. The RNA genome contains a single open reading frame (ORF) flanked by two untranslated regions (5′ and 3′UTRs). The single ORF encodes a precursor polyprotein, which is co- and post-translationally cleavaged resulting in the formation of three structural proteins, capsid (C), membrane (M), and envelope (E), and seven nonstructural proteins, NS1, NS2a, NS2b, NS3, NS4a, NS4b, and NS5.3

Recently, Messer and others4 have shown that the emergence of DHF in Sri Lanka in 1989 coincided with the appearance there of a new DENV-3, genotype III variant, which spread from the Indian subcontinent into Africa and then from Africa into Latin America.

DENV-3 was re-introduced into the Americas in 1994, after an absence of 17 years, causing DF and DHF outbreaks in Nicaragua and Panama.5 Subsequently, DENV-3 spread into Central American countries and to Mexico.6,7 In 1998/1999, DENV-3 was introduced into Caribbean countries such as Puerto Rico, Barbados, Jamaica, and Martinique, and finally in 2000, into South America.8–12 DENV-3 was isolated for the first time in Brazil from an autochthonous case of DF in December 2000 from Nova Iguaçu, near Rio de Janeiro, and then in 2001/2002, a large outbreak of DENV-3 occurred in Rio de Janeiro.11,13 DENV-3 then spread into most of the Brazilian States and, in March 2002, into the neighboring country Paraguay, where it caused a small outbreak of DF.14

We studied the molecular epidemiology of DENV-3 in Brazil and Paraguay by sequencing the E protein gene and the 3′ and 5′UTRs of 28 virus isolates and comparing these with the sequences of other strains of DENV-3.

Viral RNA was purified from 140 μL of culture fluid with the QIAamp Viral RNA kit (Qiagen, Germany), following manufacturer’s recommendations. The RNA was re-suspended in 80 μL of RNase free water.

The viral cDNA was synthesized as follows: 10 μL of RNA containing 50 ng of random primers were incubated at 95°C for 1 minute and chilled on ice for 5 minutes. To this mixture was added each dNTP to a final concentration of 0.125 mmol/L and 200 U of the Moloney Murine Leukemia Virus (M-MLV) reverse transcriptase (RT: USB, Cleveland, OH) together with its corresponding 5× buffer (4 μL); then, the volume was adjusted with RNase/DNase free water to 20 μL. The reaction mixture was incubated at 25°C for 10 minutes, at 37°C for 2 hours, and finally at 85°C for 5 minutes. Three regions of the genome of DENV-3 (5′UTR, E, and 3′UTR) were amplified using primers described in Table 2. The reaction mixture contained, in a total volume of 50 μL, 2 μL of the cDNA, 2.5 mmol/L ofmol/L of each dNTP, 0.3 μmol/L of MgCl2, 50 μ each sense an complementary primers (Table 2), and 2.5 U of TripleMaster DNA polymerase (Eppendorf, Hamburg, Germany). The amplification was carried out in a thermal cycler (MJ Research, Ramsey, MN) as follows: 40 cycles at 95°C for 30 seconds, 55°C for 45 seconds, and 72°C for 120 seconds, followed by a final incubation at 72°C for 5 minutes. The polymerase chain reaction (PCR) product was electrophoresed in a 1.8% agarose gel and visualized by UV light after ethidium bromide staining.

The mfold web server (www.bioinfo.rpi.edu/applications/mfold/old/rna/) was used to predict the secondary structural of the 5′ and 3′UTRs using standard conditions.16

DENV-3 circulating in Brazil and Paraguay grouped with other American viruses and viruses isolated in Sri Lanka and Samoa (100% bootstrap support), belonging to genotype III. American DENV-3 strains segregated into two distinct clades: one including viruses isolated in Martinique, Cuba, Brazil, and Paraguay and the other including viruses isolated in Nicaragua, Mexico, and Venezuela. Viruses D3PY/FM11/03, D3PY/YA2/03, and D3PY/AS12/02, isolated in the metropolitan area of Asuncion, were closely related to isolate D3BR/CU6/02, which was recovered from a patient in Cuiaba city, the Capital of Mato Grosso State, Brazil (Figure 1 and 2). However, both D3PY/AS9/03 and D3PY/AS10/03 strains, which also were isolated in the metropolitan area of Asuncion, grouped outside this branch. On the other hand, D3PY/PJ4/03, D3PY/PJ5/03, D3PY/PJ6/03, and D3PY/PJ7/03 strains isolated in Pedro Juan Caballero, a city on the border with Brazil, were closely related (99% bootstrap support) to viruses isolated in Porto Velho city, the Capital of Rondonia State in the Northern Region of Brazil.

The predicted 3′UTR secondary structure of DENV-3, based on the consensus nucleotide sequence for the 28 viruses in this study, was similar to that proposed by Proutski and others17 for flaviviruses (data not shown). Although the sequences of the 3′UTR were highly conserved, a variable region was observed at the 5′-ends. This region included single-nucleotide polymorphisms and eight nucleotides deletions (D3BR/MR9/03 and D3BR/IG10/03, positions 14–21) compared with the consensus sequence. Variable sites were found more frequently in single-stranded regions than in regions with predicted secondary structures. Mutations and deletions observed in different isolates did not alter the predicted secondary structure significantly (data not shown).

Phylogenetic analysis using the nucleotide sequences of the 3′UTRs of DENV-3 identified four groups or genotypes similar to those observed for the E protein gene (Figure 3). American isolates grouped with D3SriLa1266/2000 strain isolated in Martinique from a tourist that visited Sri Lanka,10 and with a strain from Singapore (87% bootstrap support), together forming genotype III. Strains D3BR/BV4/02 and D3BR/BR8/04 were more closely related to isolates from Martinique than to other Brazilian and Paraguayan strains.

Phylogenetic trees based on the nucleotide sequences of the E protein gene and of the 3′UTR (Figures 1 and 3) confirmed a common origin for all DENV-3, genotype III, circulating in the Americas, and their ancestor probably originated in Southeast Asia. Introduction of DENV-3 into South America occurred first in Venezuela in July 2000 and in Brazil in December 2000.11,12 Our data suggested that DENV-3 was introduced into Brazil from the Caribbean Islands and into Venezuela from Mexico or Central America. DENV-1, DENV-2, and DENV-3 were introduced into Brazil through Rio de Janeiro and spread to most of the Brazilian States.18 However, strains D3BR/BV4/02 and D3BR/BR8/04, isolated in the northern region of Brazil, were more closely related to isolates from Martinique than to BR74886/02 and BR/687800 strains isolated in Rio de Janeiro.19,20 These data suggested that strains D3BR/BV4/02 and D3BR/BR8/04 did not represent an evolution of the virus introduced into Rio de Janeiro but to an introduction from the Caribbean, suggesting that DENV-3 was introduced into Brazil at least twice. In Paraguay, DENV-3 was detected for the first time in 2002, causing a small epidemic of DF.14 Although our analyses could not identify the source of these strains of DENV-3 they suggested that Paraguay suffered at least three different introductions of DENV-3, probably from Brazil. The intensive trade and tourism between Brazil and Paraguay may explain this.

In this study, we analyzed only DENV-3 isolated from patients with DF; therefore, we could not make an association of disease severity with genetic determinants. However, we have included in our analysis the BR74886/02 strain isolated from a fatal case of DHF/DSS during the outbreak of 2001/2002 in Rio de Janeiro, and found that this strain showed two amino acids changes (Table 3) at positions 383 (N→K) and 391 (K→R) compared with the viruses isolated from the patients with DF studied in our work.19 However, a DENV-3 isolated from a fatal case in Cuba did not show these amino acid substitutions at positions 383 and 391.21 Finally, we identified a variable region at the 5′-end of the 3′UTR of DENV-3, which contained single nucleotide polymorphisms and eight nucleotide deletions. To our knowledge, this is the first time a deletion of eight nucleotides within a 3′UTR of genotype III has been described.

In summary, this molecular epidemiologic study provided more evidence for the movement of dengue viruses over long distances and across national borders; it also provided an example of how quickly dengue virus gene sequences can change in local populations.

DENV-3 from Brazil and Paraguay used in this study

Changes in amino acid sequences of DENV-3 isolated in Brazil and Paraguay.