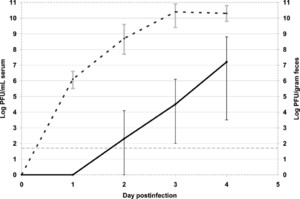 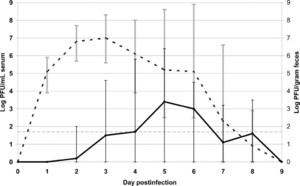 To better understand the potential environmental health risk presented by West Nile virus (WNV)-contaminated feces, we quantified the amount of WNV present in the feces of experimentally infected American crows (Corvus brachyrhynchos) and fish crows (Corvus ossifragus). Peak fecal titers ranged from 103.5 to 108.8 plaque-forming units (PFU)/g for 10 American crows and from 102.3 to 106.4 PFU/g for 10 fish crows. The presence of infectious WNV in bird feces indicates a potential for direct transmission of WNV. Thus, handlers of sick or dead birds should take appropriate precautions to avoid exposure to fecal material.

West Nile virus (WNV) is an emerging mosquito-borne flavivirus of public and veterinary health importance in North America and Europe.1,2 Since its emergence in North America in 1999, mortality in corvid species (including crows, jays, ravens, and magpies) has been the hallmark of the ongoing epidemic.1 Experimental infection of crow species determined that individual species respond to WNV infection differently in terms of viremia levels, mortality rates, and cloacal shedding.3 In this experiment, American crows (Corvus brachyrhynchos) in contact with infected cage mates became infected in the absence of vector-borne transmission, whereas fish crows (Corvus ossifragus) did not experience this type of direct transmission.

Evidence of WNV in cloacal swabs has been documented in 20 of 29 species of experimentally infected birds, including four corvid species.3–7 Furthermore, intestinal involvement in natural WNV infections was shown in 12 of 14 birds tested, including three corvid species.8 Certain species such as geese, chickens, and turkeys have little or no virus present on cloacal swabs,4–6,9 whereas American and fish crows have virus levels as high as 105.8 and 104.8 plaque-forming units (PFU), respectively, on antemortem cloacal swabs.3 However, these data do not directly indicate the viral concentration in feces.

WNV-contaminated fecal material may be infectious to people and animals. To better understand the potential environmental health risk presented by WNV-contaminated feces, we quantified the amount of WNV present in the feces of experimentally infected American and fish crows. We also compared the temporal dynamics of WNV shedding in feces with viremia profiles.

Ten American crows captured in Kansas and 10 fish crows captured in Maryland were transported to Colorado and allowed to acclimate to captivity for 2 weeks. The crows were marked with uniquely numbered aluminum bands. Seronegative status for WNV and St. Louis encephalitis (SLE) virus was confirmed by the plaque reduction neutralization test using the NY99-4132 strain of WNV and the TBH-28 strain of SLE virus.10 Crows were moved to a biosafety level 3 facility for the remainder of the study. They were housed in cages (three to four crows per cage, separated by species) providing > 1 ft2 of floor area per crow, and fed a mixture of high-quality dog food (Hill’s Science Diet-Canine Growth Kibble, Topeka, KS) and vegetables cut in small pieces. Birds were fed and watered twice a day, and cages were cleaned daily. Both groups of crows were infected by subcutaneous inoculation in the axillary region with 0.1 mL of a suspension of WNV strain NY99-6625 (crow brain isolate passed once through Vero cell culture) containing ~4,000 PFU.

Crows were observed twice a day, and blood and fecal samples were collected daily for 14 days post-inoculation (DPI). Crows that appeared seriously ill at any time during the 2 weeks of observation were killed in accordance with approved animal use protocols. All surviving crows were killed at 15 DPI. Care and maintenance of all crows met or exceeded the National Institutes of Health guidelines for the humane use of laboratory animals.

Blood samples of 0.2 mL were drawn from the jugular or brachial vein and placed in a vial containing 0.9 mL of BA-1 diluent (M199-Hank’s salts with l-glutamine, 0.05 mol/L Tris-HCl, pH 7.5, 1% bovine serum albumin, pH 7.0, 0.35 g/L sodium bicarbonate, 100 units/mL penicillin, 100 μg/mL streptomycin, 1 μg/mL fungizone). Samples were stored at −70°C. To determine viremia titers, blood samples were thawed, centrifuged, and titrated by Vero plaque assay,10 using an inoculation volume of 0.1 mL in duplicate, which provided a detection limit of 101.7 PFU/mL serum. For the purposes of calculating means, any titers < 101.7 PFU/mL were considered to be 0 PFU/mL.

After blood collection, birds were placed for 1 hour in individual, raised cages with wax paper beneath to collect feces. Individual fecal samples were collected by removing, weighing, and transferring 0.1 g of feces to a vial containing 0.9 mL of BA-1 diluent and stored at −70°C. To determine virus content, the samples were thawed, vortexed for 10 seconds, and centrifuged at 3,700 rpm for 5 minutes using a Beckman GS-6R centrifuge (Ramsey, MN). Supernatants were titrated by Vero plaque assay using duplicate 0.1-mL inocula, which provided a detection limit of 101.7 PFU/g feces. As stated above, any titers < 101.7 PFU/g were considered to be zero during analysis.

Viremias were detected in all American crows from 1 DPI through 4 DPI, with termination occurring at 4 or 5 DPI. Peak viremias for individual crows ranged from 109.8 to 1010.9 PFU/mL serum and peaked at 3 or 4 DPI. WNV in feces was first detected at 2 or 3 DPI and continued for 2–3 days until death or euthanization. Peak fecal titers for individual crows ranged from 103.5 to 108.8 PFU/g, and peak titers were observed in 9 of 10 crows at 4 DPI. Mortality was 100% and occurred at 4 DPI, with the exception of one crow at 5 DPI. Mean fecal titers rose concurrently with mean viremia titers and peaked at 4 DPI, whereas mean viremia titers peaked at 3 DPI (Figure 1).

Viremia was present in all fish crows during the first 6 days of sampling with no virus detectable in surviving crows beyond 7 DPI. The peak viremia for individual crows ranged from 105.9 to 108.9 PFU/mL serum and peaked at a mean of 2.9 DPI (range: 2–6 DPI). WNV in feces was first detected at a mean of 3.6 DPI (range: 2–5 DPI). The mean period of WNV shedding was 4 days (range: 2–6 days). Peak fecal titers for individual fish crows ranged from 102.3 to 106.4 PFU/g, and titers peaked at a mean of 5 DPI (range: 3–8 DPI). Mortality was 70% and occurred at a mean of 7.9 DPI (range: 6–13 DPI). One crow succumbed at 13 DPI, but viremia and fecal shedding were not detected after 6 and 8 DPI, respectively. Mean fecal titers rose gradually and peaked at 5 DPI, whereas mean viremia titers peaked 2 days earlier at 3 DPI (Figure 2). By 9 DPI, no viremia or fecal shedding was detected in surviving crows.

This study quantified WNV shed in the feces of laboratory-infected American and fish crows. WNV titers per gram of fresh feces in both species were observed to be 2- to 3-fold higher than reported for cloacal swabs.3 Fecal titers reached levels > 105 PFU/g in 90% of the American crows and 20% of the fish crows studied. Previous studies have shown that, in a laboratory setting, American crows can become infected by ingesting 105 PFU of WNV and that non–vector-borne transmission occurs between infected American crows and uninfected cagemates.3,11 These observations and our findings of high fecal titers among American crows indicate that the fecal–oral route could facilitate virus transmission among American crows. This seems less likely among fish crows, which develop lower fecal titers, but cannot be ruled out given observations of fish crow titers surpassing 105 PFU/g of feces. Whether fecal–oral transmission occurs among crows in the wild is unknown. However, crows often roost communally at high density.12 The risk of fecal–oral transmission in these communal roosts may be increased. WNV viability in crow feces is not known. However, WNV viability in chicken feces is reduced 99% after 24 hours.4 In fish crows, mean fecal titers peaked 2 days after mean viremia titers peaked, indicating that, although fish crows may have begun to clear circulating virus, large amounts of virus were shed for an additional 2 days before finally declining.

Fecal shedding of WNV by crows indicates a potential for direct transmission of WNV through contact with feces. The role of viral shedding in WNV transmission to birds or other vertebrates requires further research. Studies have not evaluated the quantity of virus or conditions necessary to infect humans or other primates through contact with WNV-infected feces. However, the presence of infectious WNV in bird feces warrants that handlers of sick or dead birds avoid exposure to fecal material.