Proportion of participants with asexual Plasmodium falciparum parasitemia during the first three days of treatment. AS-SMP = artesunate–sulfamethoxypyrazine–pyrimethamine; AL = artemether–lumefantrine. This figure appears in color at www.ajtmh.org. 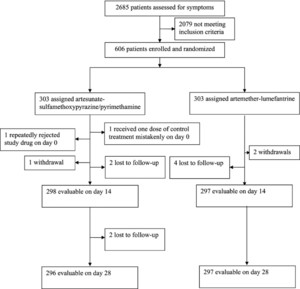 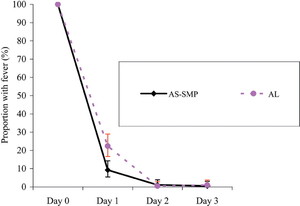 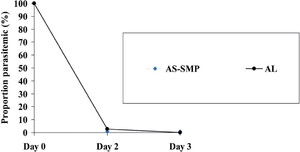 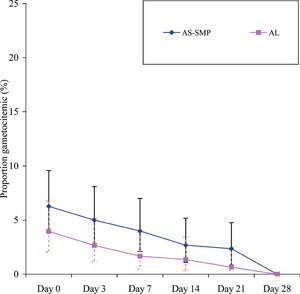 In Mali, although artemesinin-based combination therapy is being adopted, in practice, chloroquine and SP are still widely used to treat uncomplicated malaria. Unacceptable resistance of Plasmodium falciparum to chloroquine has developed in Mali, with more than a 25% failure rate in many areas (Djimde A, Diallo M, and Sogoba M, unpublished data).

We investigated whether artesunate–sulfamethoxypyrazine–pyrimethamine (AS plus SMP) was efficacious and safe when compared with AL. Sulfamethoxypyrazine (SM) or sulfalene is a well-characterized sulfonamide drug, which is chemically similar to sulfadoxine but biologically distinct with a shorter half-life and less plasma protein binding.5,6 The efficacy of SMP in treating P. falciparum malaria has been demonstrated.7–11 Since SMP has not been used widely as an anti-malarial for more than 10 years, it is expected that the combination of this drug with artesunate will result in a highly efficacious treatment of P. falciparum malaria. Artemether–lumefantrine was used as a comparator because WHO has listed this drug as an essential anti-malarial drug.

The study was conducted in Sotuba, Mali. So-tuba is a peri-urban area of Bamako, Mali, with approximately 3,500 inhabitants. Plasmodium falciparum is the predominant infecting species, accounting for more than 95% of malaria cases. Previous studies found a failure rate of 25.5% for chloroquine and less than 5% for SP in 2000 and 2001 (Sogoba M, unpublished data).

Individuals at least six months of age who came to the local health center during the study period (September 2003 to January 2004 and then from August 2004 to October 2004) were included in the study if they satisfied the following criteria: weighed ≥ 5 kg, had a P. falciparum parasite density between 1,000 and 100,000/μL, had an axillary temperature ≥ 37.5° or had a history of fever in the preceding 24 hours, were a resident of the study site, and could take oral medication. Individuals were excluded if they had symptoms or signs of severe malaria,12 had a serious underlying disease, had an allergy to one or more study drugs, had used any component of the study drugs within 28 days of enrollment, or were pregnant (detected either clinically or with a urine β-human chorionic gonadotropin test).

Each participant or participant’s guardian gave fully informed written consent prior to enrollment. The protocol was reviewed and approved by the ethical committee of the Faculty of Medicine, Pharmacy and Dentistry, University of Bamako.

Enrolled patients were randomly assigned to receive either AS plus SMP (Co-arinate; Dafra Pharma, Turnhout, Belgium) or AL (Coartem®; Novartis, Basel, Switzerland). A simple complete randomization code with treatment arm was computer generated by the study statistician who was not involved in patients’ enrollment or outcomes assessment. Study codes were sealed in individual opaque and sequentially numbered envelopes. Enrolled patients were assigned a treatment according to the envelope content. Although this was an open clinical trial, thick blood smear slide readers were kept from knowing the treatment arm until the end of the study; this aimed to minimize assessment bias because malaria parasite count was the key outcome used to define treatment failure.

Study participants were examined in the study clinic 1, 2, 3, 7, 14, 21, and 28 days after enrollment or at any time if they did not feel well. A finger skin puncture was obtained to prepare a thick blood smear and a filter paper dot (for future parasite DNA extraction) at each follow-up visit except for the first day after enrollment. Study participants or their guardians were asked about drug use since the last visit to the clinic. Individuals for whom treatment failed were treated according to the treatment guidelines of the Malian National Malaria Control Program.

Giemsa-stained thick blood smears were read by experienced microscopists who were blinded to treatment allocation. Parasite densities were calculated by counting the number of asexual P. falciparum parasites until 300 leukocytes were observed and then converting that to parasites per microliter of blood, assuming an average leukocyte count of 7,500/μL. For quality control, 10% of the slides selected at random were re-read by another microscopist who was unaware of the results of the first reading.

A complete blood count plus serum alanine aminotransferase (ALT) and serum creatinine assessments were performed among the first enrolled on approximately 20% of the total participants at baseline and 14 days after initiation of treatment. Tests were also performed if clinically indicated or if a significant abnormality was detected on day 14. In addition, hemoglobin levels were measured using a Hemocue machine (Hemocue, Ängelholm, Sweden) at baseline and on day 28.

A single round of PCR was used with the above mixture and amplification parameters to amplify the GLURP gene with the pair GLURP-1: 5′-CAG AAC TAC ATG AAA ATG AAG TGG CTC A-3′ and GLURP-2: 5′-CAT TGT TAT TTG TTT GTG ATG GTA CTT CTT CA-3′.15 Previously described methods were used to extract DNA16 and measure polymorphisms of MSP2.17

The primary objective was to test the hypothesis that AS plus SMP is as efficacious as AL in the treatment of uncomplicated P. falciparum malaria. The secondary objectives were to assess and compare the following outcomes in the two treatment arms: parasite and fever clearances, reinfection rate, gametocyte carriage rate, anemia correction rate, and clinical and biologic adverse events.

Therapeutic outcomes were classified according to the current WHO protocol18 (in areas of low-to-moderate malaria transmission). The primary endpoint was an adequate clinical and parasitologic response, or cure rate, after 14 days of follow-up. Secondary endpoints were incidence of adverse events (clinical and laboratory abnormalities), re-infection rate, anemia correction rate (anemia was defined as a hemoglobin level < 11 g/dL), fever (temperature ≥ 37.5°C) parasitemia clearance rate, and gametocyte carriage rate. Fever clearance was assessed on days 1, 2, and 3; parasite clearance was assessed on days 2 and 3; and gametocyte carriage was assessed on days 0, 3, 7, 14, 21, and 28. The anemia correction rate was determined by subtracting the anemia rate for day 28 from the anemia rate for day 0 for each treatment arm. An adverse event was defined as any sign, symptom, or abnormal laboratory value not present on day 0 but that occurred during follow-up, or one that was present on day 0 but became worse during follow-up. A serious adverse event was defined according to the International Conference on Harmonization (ICH E6, Glossary 1.50).

The required sample size was calculated using the assumption that the two study drugs were equally effective in terms of the primary endpoint, with a two-sided α = 0.05 and a power of 80%. The maximum accepted difference in efficacy between the two study treatments was set at 6%. Based on a study from The Gambia in which a 93% 14-day cure rate was reported for AL,2 606 participants (303 in each treatment arm, including a 10% attrition rate) were deemed necessary. The intention-to-treat analysis for adverse events included all randomized participants, and that for the primary endpoint excluded participants who withdrew from the study or were lost to follow-up.

Data were double-entered, validated using Microsoft Access® (Microsoft Corporation, Redmond, WA), and analyzed with STATA version 8.2 software (Stata Corporation, College Station, TX). For the baseline and the primary endpoint, the binary data were analyzed by estimation of differences in proportions with corresponding 95% confidence intervals (CIs). Exact 95% CIs were calculated when the proportions were close to 0 or 1; otherwise, normal estimations were used. For secondary endpoints, the chi-square test or Fisher exact test was used as appropriate to compare categorical variables. Student’s unpaired t-test was used to assess differences between groups in mean for continuous variables. The McNemar paired chi-square test was used to compare the prevalence of anemia before and after treatment in each treatment arm. A P value < 0.05 was considered statistically significant.

No early treatment failures were observed in either treatment arm. As shown in Table 2, the 14-day cure (adequate clinical and parasitologic response) rates before adjusting for cases of re-infection were 100% (298 of 298) and 98% (291 of 297) for participants receiving AS plus SMP and AL, respectively (P = 0.036); the difference was statistically significant. When adjusted for cases of re-infection, the 14-day cure rate for the AL arm was 100%.

Gametocyte carriage rates decreased gradually from day 0 to day 28 (Figure 4). No gametocytes were observed by day 28 for any treatment arm. No statistically significant differences were detected between the arms at any follow-up day (P > 0.05).

The high cure rates we found for AS plus SMP were expected because of the high efficacy of artesunate; the low-level resistance of P. falciparum to SP in Mali, as in most west African countries; and potentially because of the non-wide use of SMP as an anti-malarial more than 10 years ago.7–10 The mechanism of action of this drug is the same as that of SP. Some differences between the two drugs are protein binding (65% for SMP versus 99% for SP) and elimination half-life. The shorter half-life of sulfamethoxypyrazine compared with that of sulfadoxine favors its combination with artesunate, while sulfadoxine combined with artesunate would be a great pharmacokinetic mismatch.

In our study, AS plus SMP showed an additional benefit of preventing new infections; the 28-day re-infection rates were 1.3% and 9.4%, respectively (P < 0.001). A multi-center study conducted in Africa28 found that a six-dose regimen of AL resulted in a high cure rate (93.9%), but the cure rate for the four-dose AL regimen in our study was even higher (99%). Differences in elimination half-life may not explain the advantage of AS plus SMP over AL in preventing re-infection because artemether and artesunate have similar half-lives (approximately two hours each) and the elimination half-life of lumefantrine is comparable29,30 to that of sulfamethoxy-pyrazine or pyrimethamine5 (3–6 days, 3–4 days, and 2–6 days, respectively). Lumefantrine absorption or minimum inhibitory concentration may account for the difference; lumefantrine absorption is greatly improved with the intake of fatty food.29,30 During our study, all drugs were administrated in the clinical center by the physician using only water. Therefore, doses may have been taken in the fasting state because the participants may have been anorectic during their symptomatic malaria episodes.

Both treatments were similar regarding the secondary endpoints of parasite clearance rate, fever clearance rate (except for day 1 when the fever clearance was greater in the AS plus SMP arm), gametocytes carriage rate, and clinical (except for diarrhea, which was more prevalent in AL arm) and laboratory adverse events. However, the study was not empowered to detect true differences that may exist between these variables in the two treatment arms.

Administered in a single dose, a three-day course of AS plus SMP is as effective and well tolerated as a four-dose course of AL for treating P. falciparum malaria. Artesunate–sulfamethoxypyrazine–pyrimethamine showed an additional benefit of preventing new infections. Since sulfamethoxypyrazine and sulfadoxine are both sulfonamides (although quite different) and because of the insufficient data regarding cross-resistance of P. falciparum to sulfonamides,31 studies are ongoing in other malaria-endemic areas with different transmission patterns and different levels of P. falciparum resistance to SP to assess the efficacy and safety of AS plus SMP.

Demographic, clinical, and laboratory characteristics of patients at enrollment*

Clinical and parasitologic response at day 14*

Clinical and parasitologic response at day 28*