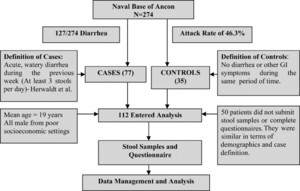 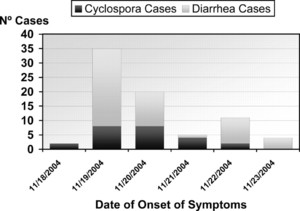 OUTBREAK OF CYCLOSPORIASIS AT A NAVAL BASE IN LIMA, PERU

Cyclospora cayetanensis is emerging as an important cause of food-borne diarrheal outbreaks, especially in developed regions like the United States and Europe. We describe an outbreak of cyclosporiasis in Peruvian naval recruits that we believe to be the first among a local population in a developing region.

Cyclospora cayetanensis is a recently recognized coccidian parasite, first seen by Ashford in 19791–3 and formally identified by Ortega in 1993.4,5 This sporulating protozoan is endemic in developing countries like Peru, and is thought to be transmitted through infected food or water.3,6,7 C. cayetanensis most frequently affects children and immunologically naïve individuals, including travelers from developed countries.2,8–10

C. cayetanensis has been responsible for numerous outbreaks of food-borne diarrhea in the United States, Canada, and Europe in the late 1990s and 2005, associated with the consumption of imported fresh produce, including raspberries, mesclun lettuce, field greens, snow peas, and basil.6,7 This report details an outbreak of cyclosporiasis in a developing region among the local population.

An outbreak of diarrhea was identified at a Naval Recruit Training Base in Lima, Peru in November 2004 via an electronic disease surveillance system. Recruits hail from all regions of Peru, are generally from lower socio-economic settings, and spend 3 months in training. There were a total of 274 in this class of recruits. Cases were identified by asking the entire group assigned to the training unit if they had symptoms of acute, watery diarrhea or related gastrointestinal symptoms during the previous week, consistent with those criteria proposed by Herwaldt and colleagues.3 Controls were identified by asking the same group for volunteers who had no diarrhea or other gastrointestinal symptoms.

The outbreak investigation took place 5 days after the first case of diarrhea was recorded. Patients completed a questionnaire concerning demographics, living conditions, sanitary behaviors, eating habits, and food and beverages consumed during the previous 4 days. Stool samples from cases and controls were collected for identification of parasites using MIF media and stained with the Kinyoun method; BACTY® medium was used for bacterial isolation. There were no food samples available for testing. All laboratory testing was performed at the microbiology and parasitology laboratories of the U.S. Naval Medical Research Center Detachment (NMRCD) in Lima, Peru.

The database was analyzed with the statistical software EPI INFO version 3.3, October 2004 (CDC, Atlanta, Georgia). Statistical description of the data was performed. Categorical variables were compared using the χ2 or the Fisher’s exact test. Univariate odds ratios were calculated for exposure variables. All confidence intervals were obtained at 95%, 2-tailed P values were used, and P < 0.05 indicated statistical significance.

Diarrhea occurred in 127 patients, yielding an attack rate of 46.3% (127/274). Seventy-seven patients with diarrhea completed questionnaires and submitted stool samples. The 50 patients who did not complete questionnaires or submit stool samples were similar in terms of demographics, and all were confirmed to have diarrhea by the Naval clinic records. Thirty-five asymptomatic persons served as controls, yielding a total of 112 persons in this outbreak investigation (Figure 1). All were male from poor socio-economic settings, with a mean age of 19 years for both case and control populations. The recruits ate all their meals at the base dining hall, as was required. The analysis of the epidemic curve of the outbreak, illustrated in Figure 2, suggests a common point source as mode of transmission with an incubation period between 2–6 days.

Twenty-seven samples were positive microscopically for C. cayetanensis, representing 31% (24/77) of cases versus 8% (3/35) of controls (OR 3.62, P = 0.032). No difference was found between cases and controls for other parasites or bacteria. Results for pathogenic bacteria (Shigella, Salmonella, Vibrio, Aeromonas, ETEC, Campylobacter) revealed only 2 positive results, 1 case with Campylobacter jejuni and a control with Aeromonas sobria. Both of these were negative for C. cayetanensis.

Unfortunately, because a bacterial pathogen was suspected at the outset of the investigation, the questionnaires for consumed foods focused on meals at the onset of the outbreak, and data collected was not pertinent given the mean 7–8 day incubation period of C. cayetanensis. In this investigation, clinical symptoms occurred with the frequencies listed in Table 1. More than 50% of the patients with diarrhea had nausea, discomfort, chills, fever and abdominal pain, consistent with previously reported case series.

Cyclospora cayetanensis infections are cosmopolitan, but appear to be most common in tropical and subtropical areas. Investigational surveys in non-outbreak periods in North America and the United Kingdom showed a prevalence for C. cayetanensis of < 0.5% in stool specimens.3 In German travelers returning from developing countries, 1% were positive for C. cayetanensis.11 Most cases of C. cayetanensis in developed countries have been seen in returning travelers, patients with AIDS, or in outbreak settings traced to imported produce.12

In developing countries where cyclosporiasis is endemic, there are higher incidence and prevalence rates among certain groups. Prevalence rates have been reported as high as 28% in poor Peruvian children.4 A 2-year cross-sectional stool survey conducted among children in a shantytown in Peru reported the prevalence rate was highest in children between 2–4 years.13 The rate among children > 11 years was 0%, suggesting either that protective immunity develops with repeated exposure to C. cayetanensis early in life or there may be differential exposure risk in older individuals.3,13,14 Cyclosporiasis is not common in adults from lower socioeconomic groups, likely because of this acquired immunity,4 but adults who live in sanitary conditions have rates similar to children or non-immune patients when they are exposed.12

Reports of point source outbreaks of C. cayetanensis in endemic settings are limited. There have been reports from a wedding in Mexico,8 among expatriates in Indonesia,10 at a British Guhrka military camp in Nepal,15 and among Dutch microbiologists attending a scientific meeting in Indonesia,9 but these have focused on expatriates or upper class groups visiting the developing world. Our data demonstrate that outbreaks of cyclosporiasis do occur in the developing world among local populations. Several hypotheses may explain this being the first report of an outbreak among a local population from a developing region, including the lack of adequate diagnostic capability and the predominance of empirical treatment of presumed bacterial pathogens, often with inexpensive antibiotics such as cotrimoxazole. Also, it is interesting to note that recruit-training camps are extremely crowded and stressful environments, both of which may increase susceptibility to infection.

The exact source of this outbreak is impossible to determine in retrospect. Our questionnaire asked detailed questions about meals, but focused on several days after the likely infectious meal was served. There were no leftover samples of food or water to test for C. cayetanensis. Many potentially contaminated foods were served during this time, including peas, fresh vegetables, and salads. Perhaps most likely to be the source of this outbreak were some of the salsa sauces, which frequently contain basil and other fresh leafy vegetables, but we were unable to address this due to the lack of food samples.

This outbreak investigation contributes to the epidemiologic knowledge about cyclosporiasis, but it also raises many questions, including what constitutes durable immunity to C. cayetanensis, as well as which other factors are involved in clinical infection in local populations that are presumably continuously exposed. The epidemiology of this emerging pathogen has yet to be fully determined.

This report is the first to characterize an outbreak of diarrhea due to C. cayetanensis in a developing region among a local population. The epidemiology and clinical course are similar to reported outbreaks in developed regions. While this report contributes to the epidemiologic knowledge concerning C. cayetanensis, there is much to learn about the local epidemiology, pathogenesis, and immunology of this emerging pathogen. Outbreaks of cyclosporiasis in developing regions indicate a continued need to study this disease in that setting, especially since much of the food imported to developed regions originates in developing regions.

The study protocol was approved as non-human subject research by the Naval Medical Research Center Institutional Review Board (Project # 12).

Copyright: Several of the authors are military service members. This work was prepared as part of their official duties. Title 17 U.S.C. § 105 provides that ‘Copyright protection under this title is not available for any work of the United States Government’. Title 17 U.S.C. § 101 defines a U.S. Government work as a work prepared by a military service member or employee of the U.S. Government as part of that person’s official duties.