Month of hospital discharge for RMSF among American Indians and Alaska natives. Shown as the percent of total discharges, IHS and tribally administered hospitals, 1980–2003. This figure appears in color at www.ajtmh.org.

Hospitalization rates for RMSF by IHS region. Hospitalizations per 100,000 AI/ANs, IHS and tribally administered hospitals, 1980–2003. This figure appears in color at www.ajtmh.org. 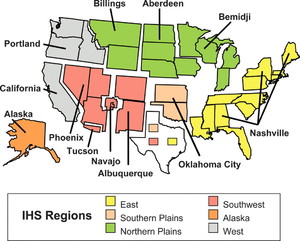 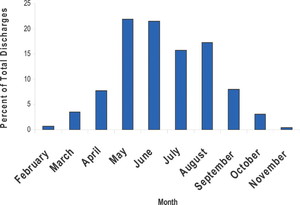 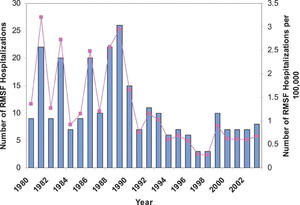 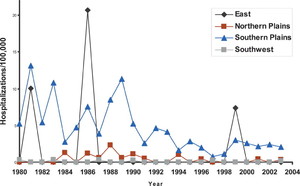 Rocky Mountain spotted fever (RMSF), caused by Rickettsia rickettsii, is a potentially fatal tick-borne illness and is the most severe rickettsial illness in humans.1–3 RMSF is endemic throughout the southeastern and southcentral United States, and people residing in these areas are at high risk for infection compared with those in other regions.1 The average annual RMSF incidence in the United States during 1997–2002 was 2.2 cases/million persons, with an overall case fatality rate of 1.4%.4 Ticks, primarily the American dog tick (Dermacentor variabilis) and the Rocky Mountain wood tick (Dermacentor andersoni), serve as both the reservoir and the vector of RMSF, and typical tick exposures occur in rural, forested areas.5 A new vector of RMSF in the United States, the brown dog tick (Rhipicephalus sanguineus), was recently identified in rural Eastern Arizona.6

Patients with RMSF typically experience acute onset of fever, headache, and myalgia within 14 days of tick exposure.7 These symptoms are followed by the development of a characteristic rash that may progress from maculopapular to petechial in nature and is often seen on the palms and soles. Severe manifestations include adult respiratory distress syndrome, central nervous system alterations, and acute renal failure.7 Because of its nonspecific nature in early stages, RMSF can be difficult to diagnose.8 Case fatality rates can be as high as 30% in untreated patients, and thus prompt recognition and appropriate treatment with doxycycline are crucial to prevent severe complications and death.1,9

American Indians have been shown to be at greater risk for RMSF than the general population; for example, those living in Oklahoma have a higher rate of RMSF than the overall Oklahoma population.10 Moreover, American Indians and Alaska Natives (AI/ANs) receiving health care from the Indian Health Service (IHS) or tribal facilities have a 21% higher rate of infectious disease hospitalizations than that for the general US population.11–13 The IHS, an agency of the US Department of Health and Human Services, provides comprehensive health care to AI/ANs who are members of federally recognized tribes.14 As of 2000, the IHS service population consisted of ~1.5 million people (~60% of all AI/ANs).15 AI/ANs using the IHS system typically reside in more rural areas15 and may be more frequently exposed to ticks, putting them at high risk for RMSF.10 Furthermore, with the identification of a new RMSF vector in the rural southwestern United States, AIs residing in rural areas of this region may be at increased risk of infection.6 To assess the impact of RMSF among AI/ANs and to determine possible demographic risk factors associated with RMSF, we examined hospitalization records with RMSF as a diagnosis among AI/ANs during 1980 through 2003.

We performed a retrospective analysis of RMSF hospitalization that occurred during the calendar years 1980 through 2003 among AI/ANs receiving IHS-funded health care. We obtained data from the IHS Direct and Contract Health Service Inpatient Dataset for AI/AN patients.16 The IHS Inpatient Dataset includes all AI/AN patient discharge records obtained from IHS- and tribally operated hospitals and from hospitals that have contracted with IHS or tribes to provide health care services to federally recognized AI/ANs within the United States.15 The IHS is comprised of 12 regional administrative units (Area Offices), which are further grouped into 6 geographic regions by the IHS: East (Nashville IHS area), Northern Plains (Aberdeen, Bemidji, and Billings IHS areas), Alaska, Southern Plains (Oklahoma City IHS area), and Southwest (Albuquerque, Navajo, Phoenix, and Tucson IHS areas; Figure 1; David Espey, personal communication). The IHS California and Portland, OR, administrative areas (West IHS region) were excluded from analysis because neither had IHS- or tribally operated hospitals. In addition, California does not report contract health services inpatient data by diagnosis, and Portland has limited contract health service funds for inpatient care.17,18

This study included all IHS inpatient records with an International Classification of Diseases, 9th revision, Clinical Modification (ICD-9-CM) code of 082.0 (tickborne rickettsioses: RMSF) as any one of diagnoses listed on an AI/AN’s hospital discharge record during 1980–2003.19 Hospital discharge records were examined by age group, sex, month of discharge, IHS region, and period (1980–1984 and 1999–2003). Hospital length of stay for RMSF hospitalizations was also examined. The population denominator for IHS hospitalization rates was determined for each year of the study by multiplying the IHS fiscal year 2003 user population estimates (overall, regionally, and by age group, excluding the West IHS region) by the proportion of the estimated IHS service population for previous years based on the 2003 service population.15,20 The user population includes all registered AI/AN patients who received IHS-funded health care service at least once within the preceding 3 years, and the service population is an estimate of the number of AI/ANs eligible for IHS-funded health care.15 The unit of analysis for the study was a hospitalization event; patient identifiers were not available for examination of readmissions. All hospitalization rates were expressed as the number of hospitalizations per 100,000 AI/ANs using the IHS/tribal system. Hospitalization rates by age group, sex, region, and period (1980–1984 and 1999–2003) were compared using risk ratios (RRs) with 95% confidence intervals (CIs).

Historically, the state of Oklahoma experiences one of the highest incidences of RMSF nationwide, with an average annual incidence of 1.49 cases per 100,000 population reported for 1997–2002.2,4,10 One recent study reported that comparing all Oklahoma residents to the general US population, AIs living in Oklahoma experience a higher RMSF hospitalization rate, likely because of a higher frequency of exposure to ticks.10 Ticks infected with R. rickettsii may be highly concentrated in focal geographic areas and may thus contribute to high rates of transmission of rickettsiae in these areas.21,22 In contrast, RMSF is rarely seen in the state of Alaska simply because the climate is not favorable to the ticks that harbor and transmit the disease,5 and this study did not find any RMSF hospitalizations reported from the Alaska region.

In the RMSF endemic Southern Plains region, the annual RMSF hospitalization rate among AI/ANs decreased during the study period. Declines in hospitalization rates were also recently observed in overall infectious disease hospitalizations among AI/ANs and the general population.11–13,23 The observed decrease in RMSF hospitalization rate among AI/ANs may be caused by an increase in awareness of treatment options and the importance of empirical anti-microbial therapy leading to appropriate treatment on the patient’s first outpatient visit for RMSF. Centers for Disease Control and Prevention (CDC) and state health departments have increased efforts to educate physicians and the public about the risk of disease from ticks through the internet and pamphlets, specifically in high-risk areas such as Oklahoma. It is also possible that the frequency of tick exposure among AIs in this region is declining because of shifts in recreational and occupational activities toward more urban environments.24

This study showed a significantly higher rate of RMSF hospitalization among AI/AN children 1–4 years of age compared with those for the older age groups. As identified through CDC surveillance, the average annual incidence of RMSF in the United States was highest in the 5- to 9-year-old age group (37 cases per 100,000 persons) during 1981 through 1996.2 Published studies show that children are at highest risk for RMSF infection, with the majority of RMSF cases reported in children < 15 years of age.1,2 Historically, the most severe cases and the highest RMSF case fatality rates are seen in adults > 60 years of age.1,2 Most of the RMSF hospitalizations among AI/ANs occurred during May through August. This seasonality is similar to the reported national peak of RMSF cases that typically occurs between the months of April and September, which coincides with peak tick activity.5

There are some limitations with use of hospital discharge data. Discharge diagnoses may be incomplete or miscoded, and diagnostic criteria may vary regionally. Furthermore, RMSF may be diagnosed without a corresponding RMSF laboratory verification. For example, ehrlichioses caused by Ehrlichia chaffeensis and E. ewingii and two other tickborne illnesses endemic in regions of the United States overlapping with RMSF (e.g., Southern Plains region) may seem clinically compatible with RMSF. Without laboratory diagnostics, these other rickettsioses may often be reported as RMSF. A study in North Carolina, a state that reports incidences of RMSF and ehrlichiosis/anaplasmosis similar to those seen in Oklahoma,4,25 found that febrile patients with a history of tick bites were as likely to show serologic evidence of exposure to ehrlichia agents as to RMSF.26

Although pre-paid IHS-funded health care is provided to eligible AI/ANs, the availability of IHS/tribal services can vary by region, and it is possible that AI/ANs eligible for IHS/tribal services could have received inpatient care outside of this system, resulting in underestimates of hospitalization rates and hospital fatality rates.14,20 In addition, some AI/ANs may have private health care insurance plans through workplaces, allowing them to afford health care outside of the IHS/tribal system. The AI/AN patients in this study received IHS-funded health care and may not be representative of all AI/AN patients in the United States. This study did not examine RMSF hospital discharge data from surveys of the general US population since they are not comprehensive enough for reliable rate comparisons. Although cases of RMSF are considered nationally notifiable, the CDC RMSF national surveillance system is a passive reporting system conducted on a voluntary basis and is therefore not as comprehensive as the IHS data and can not be used for comparison.27

It is important to accurately assess the burden of tickborne illnesses within AI/AN communities because of the changing ecology of tickborne diseases as a result of urban/rural demographic shifts,24 and because AI/ANs have a greater rate of infectious disease hospitalizations than the general US population.12,13 Further study may be useful for the comparison of RMSF rates within the IHS regions to that for the entire regional population. Education should be provided to IHS/tribal physicians on diagnosis and risk factors for RMSF and other tickborne illnesses, including proper laboratory diagnostics and prompt appropriate antibiotic treatment, especially within high-risk areas such as the Southern Plains region. These efforts are important to improve the awareness and treatment of RMSF and other tickborne illnesses in American Indians.