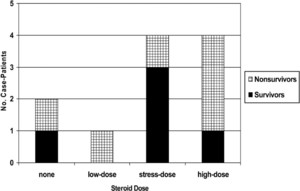 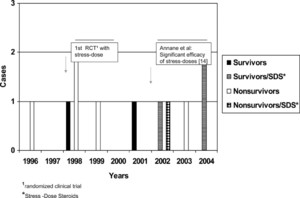 During 1996 through 2004, 29 cases of yellow fever vaccine-associated viscerotropic disease (YEL-AVD) have been reported worldwide; 17 were fatal. Stress-dose corticosteroid (SDS) therapy has recently been found to improve survival among patients with septic shock but benefit for the treatment of YEL-AVD patients in septic shock is unknown. We retrospectively reviewed medical records of 11 U.S. YEL-AVD cases reported to the Vaccine Adverse Event Reporting System (VAERS) from 1996 through 2004. Four of 11 case-patients received SDS; 3 of these 4 (75%) survived. Seven patients did not receive SDS and 2 (29%) survived. Altered mental status was documented on admission for 5 of the 11 patients; 4 of these 5 did not receive SDS and died, whereas one received SDS and survived. The use of stress-dose steroids might be a factor that influenced the survival of these YEL-AVD patients and should be further evaluated in the management of both YEL-AVD and wild-type yellow fever septic shock.