Speckled nuclear pattern of immunostaining in the spindle cells of this lesion with antibodies to HHV-8 ORF-73 (magnification, ×100). This figure appears in color at www.ajtmh.org. 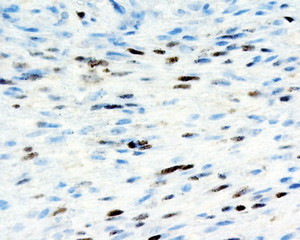 IS CLASSIC KAPOSI’S SARCOMA ENDEMIC IN PERU?: REPORT OF A CASE IN AN INDIGENOUS PATIENT

Kaposi’s sarcoma (KS) has been classified in four clinical variants (classic or Mediterranean; endemic or African; epidemic or AIDS-related; iatrogenic or immunosuppression-related). Human herpesvirus 8 (HHV-8), has been found in all these variants. We herein discuss the unusual presentation of a 53-year-old indigenous patient with purplish-brown nodular lesions on lower extremities, and miliary tuberculosis. ELISA-HIV tests were negative and immunohistochemistry (IHC) of the tumor tissue was positive for HHV-8. This is the first reported case in which the presence of HHV-8 was evidenced by means of IHC techniques in Peru. We also review all available Peruvian literature of classic KS, a disease that has been frequently reported in indigenous population of Peru since 1968, making this country a possible endemic zone of classic KS.

Kaposi’s sarcoma (KS) was first described in 1872 by Moriz Kaposi (formerly Moriz Kohn), a Hungarian dermatologist, as “Idiopathisches Multiples Pigmentsarkom der Haut”.1 For many years it was considered a rare, benign disease, occurring primarily in elderly men of Mediterranean and Eastern European descent.

In 1994, Chang and others2 found a new human herpesvirus (HHV) in almost 100% of the KS lesions. It was determined that this virus was a gamma-herpesvirus, linked to the Epstein-Barr virus, and it was called KS-associated herpesvirus (KSHV) or HHV-8.3 Nowadays, four clinical variants for KS are recognized (classic or Mediterranean; endemic or African; epidemic or AIDS-related; iatrogenic or immunosuppression-related); all these variants have identical histologic characteristics but affect specific populations, appear in different areas of the body, and have a different progression rate.4,5

The purpose of this report is to present the case of an HIV-negative patient who was simultaneously diagnosed with miliary tuberculosis and classic cutaneous KS. Likewise, we review important literature on classic KS in Peru. It is worth noticing that this is the first case reported in which the presence of HHV-8 was evidenced by means of immunohistochemistry techniques in Peru.

A 53-year-old, indigenous (Quechua) male patient was admitted with a 6-month history of abdominal pain, diarrhea, and weight loss. Two months before admission, he noticed 8–10 reddish papules on both legs with progressive enlargement during the next months. One week before admission he complained of occipital headache. The day of admission he was found by his relatives with altered consciousness. He had no personal history of tuberculosis and no risk behavior for sexually transmitted diseases. Physical examination revealed a cachectic male, with severe paleness of mucosae, mild jaundice, and multiple painless purplish-brown nodular lesions of ~0.5 to 1 cm in diameter on the anterior tibial region of both legs. Likewise, he showed a hyperkeratotic purplish-brown plaque with regular edges of around 2 × 4.5 cm on the external face of the left heel. Respiratory examination revealed decreased breath sounds in both bases and rales in the lower third of both lung fields. Cardiac examination was normal except for a multifocal III/IV systolic murmur. Abdominal examination showed diffuse abdominal tenderness. Neurologic examination evidenced a disoriented patient, with a confused verbal response, stiffness of neck, and positive Kernig and Brudzinski signs. Laboratory findings on admission showed a hemoglobin of 7.4 g/dL and leukocytes of 7,000 cells/mm3 (neutrophils, 78%; lymphocytes, 11%; monocytes, 0%; eosinophils, 0%; basophils, 0%). Platelet count, glucose, and liver and renal function tests were all within normal limits. A lumbar puncture was performed finding cerebrospinal fluid (CSF) of transparent appearance with a glucose of 9 mg/dL (normal values [N.V.]: 50–75 mg/dL), albumin of 65 mg/dL, proteins of 168.5 mg/dL (normal values [N.V.]:15–45 mg/dL), adenosine deaminase of 32.35 (N.V.: 0–6 U/L), leukocytes of 50 (polymorphonuclear [PMN] 2%; mononuclear [MN] 98%), and red blood cells (RBC) of 20 at cell count. Gram stain, Indian ink, and cultures for common bacteria and fungi were negative. Several concentrated sputum samples revealed numerous acid-fast bacilli. Chest x-rays revealed a miliary pattern compatible with miliary tuberculosis. Ziehl-Neelsen stain modified for coccidea was negative. He was started on rifampicin, isoniazide, pyrazinamide, ethambutol, and dexamethasone. On the 13th day, streptomycin was added.

Biopsy of lesions showed spindle cell proliferation, erythrocyte-filled vascular slits, and proliferation of small vessels with evidence of extracellular hemorrhage and hemosiderin deposition. The biopsy was processed by deparaffinizing sections of tissue, which were incubated with monoclonal and/or polyclonal antibodies along with appropriate positive controls. Localization was through a modified avidin biotin immunoperoxidase technique, with pre-treatments (enzyme and/or heat induced epitope retrieval) according to protocols optimized for each antibody. The positive control slides for each test were reviewed and found to be satisfactory. Results are as indicated in Table 1. The result confirmed that the spindle cell population of this lesion showed expression of the endothelial-restricted markers, CD31 and CD34, as well as expression of the ORF-73 antigen of HHV-8 (Figure 1). Two tests were performed for antibody detection: HIV ELISA (EIA method) for HIV-1 and 2 and DOT-ELISA HIV 1 and 2, both with negative results.

Classic KS was first reported in Peru in 1968. The patient was a 58-year-old indigenous man with purple nodules on his arms and legs.6 In 1985, with the purpose of evaluating the immunoperoxidase method in the search for factor VIII antigen, 27 cases of classic KS (21 men, 6 women) found between 1968 and 1982 were reported.7 The most common sites of presentation were the lower and upper limbs with ulcerated and hyperkeratotic lesions. In 1996, the clinical records from 81 patients with KS diagnosis (62 with classic KS and 19 with AIDS-related KS) between 1949 and 1994 at the National Cancer Center of Lima (INEN) were reviewed.8 There was a male-female ratio of 3:1, with a mean age of 64.1 years. Forty-three patients presented lesions on the lower limbs, and 16 patients had a diffuse presentation. Twenty-four patients have only one lesion, whereas 38 patients presented with multiple lesions. Ten patients had eroded lesions, and 10 patients had tuberculosis at the time of diagnosis. In 1998, two cases of classic KS with unusual characteristics (right index finger and left thumb) were reported.9

This is the first case in Peru where HHV-8 was found in KS lesions through immunohistochemical techniques. Nowadays, it is accepted that if HHV-8 is the agent responsible for KS, it has to be present to develop all clinical forms of KS, it is detected in almost 100% of KS lesions, and it is considered a contributing agent but not the only one to develop this neoplasia.10–14 Besides Peru, there have been > 70 cases of classic KS reported in Colombia, showing that it is a prevalent pathology in South America.15 An interesting clinical observation from Colombia is that the classic KS seen in their patients resembles the type of disease seen among African communities. The same unusual presentation with confluent exophytic nodules or eroded lesions has been seen in Peru. Likewise, cases reported in Colombia and Peru characteristically mentioned that KS cases presented on indigenous populations. It is important to note that classic KS cases are under-diagnosed and under-reported because it occurs in areas with extremely low socioeconomic conditions.

Tuberculosis and classic KS co-infection is uncommon. Some of the cases reported in HIV-negative individuals included patients with splenic non-Hodgkin lymphoma, Hodgkin’s disease, post-renal transplants, and orificial tuberculosis.16–20 The presence of multisystemic tuberculosis and classic KS in our patient is unusual; the conclusion is that immunosuppression caused by severe tuberculosis could be involved in KS onset and progression. The diagnosis obtained through conventional staining with hematoxilin and eosin was confirmed using antibodies to the ORF73 HHV-8–encoded protein (called the latency-associated nuclear antigen), which have proven to react exclusively with the spindle-shaped cells of KS, revealing a nuclear dot-like staining pattern. Our patient died because of gastrointestinal bleeding, the possible causes for this could have been intestinal tuberculosis or intestinal KS, which has been described in 10% of classic KS patients.3

In the numerous countries where seroprevalence of this virus has been studied, data show that the virus is not ubiquitous in general healthy human populations as is the case with other human herpesvirus.21–23 Because of this particular distribution of HHV-8 in the world, these population groups have a higher rate of KS incidence. We believe that our case report and the cumulative weight of > 90 published cases of classic KS, especially in indigenous patients, show the need for a retrospective study to determine the epidemiologic, clinical, and morphologic findings of KS, with special emphasis on patients origin and ancestry; making it possible to perform comparative analysis of KS within the region. Once classic KS risk groups are identified, it would be necessary to perform HHV-8 seroepidemiological studies for better understanding of this disease in Peru and its phylogenetic distribution. The Peruvian population is made up of mainly indigenous or Amerindians (45%; 8 million Quechuas, 1.8 million Aymaras, and 300,000 Amazonic Amerindians), mestizo (37%; mixed Amerindian and white), white (15%), and others (3%). This indigenous population has not been described as presenting classic KS. It is necessary to emphasize that Peru could be considered an endemic zone of this unusual tumor.