Map of Bas-Congo province with 27 Health Zones, among which are three main regions endemic for Buruli ulcer: the zones of Kimpese, Nsona-Mpangu, and Kwilu-Ngongo. 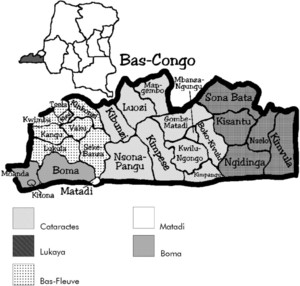 Buruli ulcer (BU), which is caused by Mycobacterium ulcerans, is an important disabling skin disease. Its prevalence is highest in west and central Africa. We report an apparent resurgence of BU in the Bas-Congo Province, Democratic Republic of Congo. During a 28-month period in 2002–2004, the rural hospital of the Institut Médical Evangélique at Kimpese admitted 51 patients suspected of having BU. Bacteriologic, molecular biologic, and histopathologic studies confirmed BU in 36 of these patients. Extensive clinical data, treatment outcomes, and socioeconomic correlations are summarized. Osteomyelitis was an important complication. A multidisciplinary approach to BU control in the Bas-Congo is proposed, aimed primarily at active case detection.