Strict consensus of 150 trees based on the MP analysis of ITS2 rDNA sequences under the assumptions of Tv/Ts ratio 1:1 (774 characters, 62 parsimony-informative characters, TL = 349, CI = 0.96). The numbers at the nodes show bootstrap values. The tree is identical to the topology based on Tv/Ts ratio 1:2. *Marine species; +freshwater species; •terrestrial species.

Strict consensus of three trees based on the ME analysis of ITS2 rDNA sequences (ME score = 0.57). The numbers at the nodes show bootstrap values. *Marine species; +freshwater species; •terrestrial species. 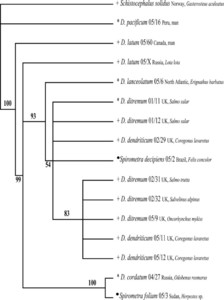 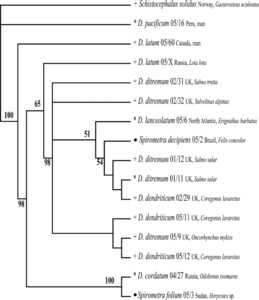 IS THE HUMAN-INFECTING DIPHYLLOBOTHRIUM PACIFICUM A VALID SPECIES OR JUST A SOUTH AMERICAN POPULATION OF THE HOLARCTIC FISH BROAD TAPEWORM, D. LATUM?

Using ITS2 gene sequences, the validity of the tapeworm Diphyllobothrium pacificum (Nybelin, 1931), infecting humans on the Pacific coast of South America and in Japan, was assessed. ITS2 sequences of this cestode differed markedly (sequence similarity 79.0–80.2%) from those of the most common human-infecting cestode, the broad fish tapeworm Diphyllobothrium latum (L.), as well as other four species of Diphyllobothrium, including potential human parasites (D. cordatum, D. dendriticum, and D. lanceolatum) and two species of Spirometra (sequence similarity 77.5–81.9%). Interspecific sequence similarity between all but one (D. pacificum) species was 86.1–99.6%, whereas individual isolates of D. dendriticum and D. ditremum exhibited intraspecific sequence similarity of 97.0–98.0% and 98.2–99.9%, respectively. Phylogenetic trees constructed from ITS2 sequences show a markedly distant position of D. pacificum from other species analyzed and also indicate the possible paraphyly of Spirometra.

Tapeworms of the genus Diphyllobothrium Cobbold, 1858 (Cestoda: Pseudophyllidea) are common intestinal parasites of birds and mammals. Some species have been reported to infect man, with estimated 20 million cases worldwide.1,2 The most frequent human parasite is the broad fish tapeworm, Diphyllobothrium latum (L.), which occurs in some regions of North America (Alaska, Great Lakes), Europe, and Russia.2,3 Another species, Diphyllobothrium pacificum (Nybelin, 1931) (syn. Adenocephalus pacificums Nybelin, 1931), is a parasite of fur seals and sea lions (Pinnipedia: Otariidae), originally described off the coast of Peru.4 It has also been found in humans in Peru, Chile, Ecuador, and Japan,2,3,5–7 where raw or undercooked fish are eaten.

Despite the fact that D. pacificum was differentiated from other Diphyllobothrium species by a number of morphological characters,4,5,8 the validity and identity of this species found in humans was questioned because other species of the genus, such as D. latum and D. dendriticum, have been reported from fish and humans on the Pacific Coast of South America and in Brazil.2,5,9–15 Therefore, a comparative study of several species of Diphyllobothrium and related genus Spirometra was carried out. Their phylogenetic relationships were assessed on the basis of the ITS2 gene sequences.

A total of 15 samples of six species of Diphyllobothrium and two species of Spirometra were sequenced. Adult tapeworms or plerocercoids were collected by the authors and other researchers (see the list of specimens sequenced) or obtained from the helminthological collections of the Natural History Museum in Vienna, Austria (Naturhistorisches Museum, Wien [NMW]) and the Parasitological Institute of the Russian Academy of Sciences, Moscow, Russia (previously Helminthological Laboratory of the Academy of Sciences of the USSR [GELAN]).

As the outgroup, the diphyllobothriid cestode Schistocephalus solidus (Müller, 1776), a common parasite of fish-eating birds and also reported infecting humans in Alaska,1 was used (sequence AY549509).

The sequences were aligned using the Megalign program (DNAstar, Nevada City, CA), and their similarity was determined using its Martinez/Needleman-Wunsch method (Table 1). The alignment was corrected manually using the Bioedit program.18 The alignment is available from the first author on request (andrea@paru.cas.cz). The phylogenetic analysis and calculation of nodal support (MP, maximum parsimony; ME, minimum evolution and bootstrap) were performed using PAUP* version 4.0b10.19 MP analysis was performed by heuristic search (TBR) with 1,000 replicates of random sequence addition under the assumption of Tv/Ts ratio 1:1 and 1:2. Gaps were treated as missing data. Bootstrap support (1,000 replicates) was calculated for Tv/Ts 1:1. The distance method ME was performed using model Jukes-Cantor, bootstrap support was calculated for 1,000 replicates.

Two species currently placed to Spirometra, namely S. decifiens and S. folium, were split among species of Diphyllobothrium (Figures 1 and 2), thus indicating possible paraphyly of the genus. Intraspecific differences were smaller than those found between species. Sequence similarity of three D. dendriticum samples, including plerocercoids collected simultaneously in two whitefish from the same locality, was 97.0–98.0%, whereas that among five isolates of D. ditremum was 98.2–99.9% only.

These data strongly support the validity of D. pacificum as a species markedly distant from species of Diphyllobothrium reported from humans (i.e., D. latum, D. cordatum, D. dendriticum, and D. lanceolatum). The very low values of sequence similarity of D. pacificum with other taxa sequenced even indicate that Adenocephalus, in which the species was originally placed,4 should still be retained as a valid genus.8

However, taxonomic conclusions cannot be made on the basis of these data because sequences of only one gene were used. In addition, the taxonomic importance of the morphological features used to distinguish Adenocephalus from other diphyllobothriids (i.e., the presence of numerous unicellular gland cells within the scolex [Drüsenzellen] and separate openings of the male [cirrus-sac] and female [vagina] genital pores [versus a common opening of both genital pores in other diphyllobothriid genera])4 requires the critical evaluation of comparative material.

Samples of D. dendriticum and D. ditremum did not form monophyletic clades and were split among other species of Diphyllobothrium and Spirometra (Figures 1 and 2). The ME analysis provided more resolved relationships among individual species, but did not contradict the less resolved topology of the MP analysis. Using single-strand conformation polymorphism-based analysis inferred from partial sequences of the cytochrome c oxidase subunit 1 gene (pcox1), marked intraspecific variation among isolates of Spirometra erinacei from definitive (dogs, foxes, cat) and intermediate (snakes, frogs) hosts was also found.20

Placement of two cestodes of Spirometra among species of Diphyllobothrium may indicate that the former genus is paraphyletic or that the two taxa sequenced actually belong to Diphyllobothrium. The systematics and taxonomic status of Spirometra have been controversial for a long time,21–23 and it is obvious than more representative species sampling is necessary to make more definitive conclusions of the validity of this genus and its relationships to other diphyllobothriid genera. Another source of confusion may be related to the incorrect identification of the taxa studied, because a number of species of both genera have been established only on the basis of negligible or questionable morphological differences.

Nothwithstanding taxonomic problems still existing in this group of pseudophyllidean cestodes, this study seems to provide convincing evidence that D. pacificum is a valid species that may have evolved as a parasite of otariid seals, long before human populations colonized the Pacific coast of South America.5 Results of this study also support the assumption that the source of human infections with D. pacificum is sea fish, whereas human-infecting taxa of Diphyllobothrium widely distributed in the northern hemisphere, such as D. latum and D. dendriticum, are transmitted by freshwater fishes.10,11,13,14