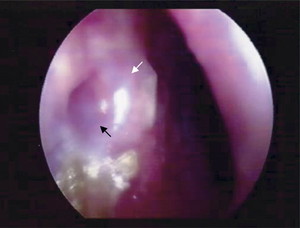 Mucosal leishmaniasis (ML) is often clinically silent until reaching a highly advanced state. In this prospective study, 6 of 220 patients with early cutaneous leishmaniasis were diagnosed with mucosal involvement by otorhinolaryngological examination (a rate similar to the reported rate of late ML). Detection of early ML may represent an important strategy in preventing severe mucosal destruction in human leishmaniasis.