The distributions of pairwise relatedness at 12 habitats with three or more larvae.

Inferred habitat use by female adults. 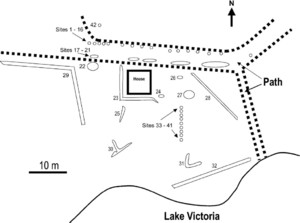 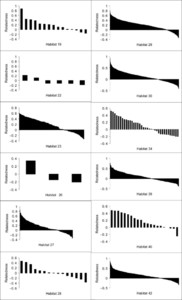 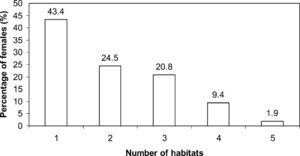 Anopheles gambiae females in a relatively isolated hut and all larvae from larval habitats within 100 m of the hut were collected in August 2001 in western Kenya. Among 42 aquatic habitats, 16 had A. gambiae larvae. Two hundred fifty larvae and 58 adults were genotyped using nine microsatellite markers to infer sibling relationship between the larvae and maternity between the females and larvae. The pairwise genetic relatedness of A. gambiae larvae per habitat ranged from −0.4112 to 0.9375, indicating that full siblings, half siblings, and genetically unrelated individuals presented at those habitats with multiple larvae. From a likelihood analysis, it was estimated that 56.6% of females had larvae in multiple habitats. These results substantiate that one A. gambiae female uses multiple breeding sites for oviposition, and thus, average genetic relatedness for breeding sites with high larval populations tends to be low.

Anopheles gambiae Giles is the principal vector of human malaria across sub-Saharan Africa. Although many aspects of biology and behavior of the mosquito have been studied and well documented, as reviewed by Gillies and Coetzee,1 little is known about the oviposition behavior of A. gambiae under field conditions. When seeking novel avenues for ecological control of mosquitoes and mosquito-borne disease, mosquito breeding behavior should receive more attention.2

The gravid females of A. gambiae sensu lato prefer black-bottomed water dishes to white-bottomed ones for oviposition, and most eggs are laid in pools with muddy and unvegetated edges.3–5 Other factors such as habitat size, substrate, semiochemicals, microbial fauna, predators, vegetation, and land cover types also affected the choice of aquatic breeding site by a female.6–17 Different volatiles and concentrations from potential habitats can either attract or repel anopheline females from laying eggs.18–20 The majority of A. gambiae s. l. adults invade huts within 300 m of their nearest larval habitats.21 Most larval habitats of A. gambiae s. l. are temporary aquatic habitats such as animal footprints and puddles in western Kenya, and the relative abundance of A. gambiae larvae is significantly associated with the distance between a larval habitat and the nearest hut.8,10,21 In nature, the abundance of anopheline larvae varies substantially among aquatic habitats. Some habitats contain high densities of anopheline larvae, whereas many others have none despite high densities of mosquito adults in surrounding huts.21 Such variation leads to the speculation that some aquatic habitats are more attractive or suitable for oviposition and larval development than others.4,8 If this is true, limited suitable aquatic habitats may lead to oviposition by multiple females. On the other hand, skip oviposition, laying a few eggs in several different sites, has been reported in the yellow fever mosquito, Aedes aegypti, from both laboratory studies and field evaluations.22–27 A. aegypti primarily develops in containers, and its larval density tends to be high (hundreds of larvae in a container). However, A. gambiae females generally use temporary aquatic habitats for oviposition, and their larval density in a habitat is generally lower (< 50 larvae).28 To date, no report on the oviposition behavior of anopheline mosquitoes in nature has been published.

Direct observation of mosquito oviposition in nature is not feasible because of the untraceable movement, nocturnal activity, and tiny size of mosquitoes. However, indirect methods such as genetic approaches can be useful tools for the study of mosquito oviposition behavior. Randomly amplified polymorphic DNA (RAPD) markers have been used to estimate the number of full-sibling families in A. aegypti.26,29 These studies have found that the average family size of mosquito larvae in a container is 11 and that family size distribution among the containers is skewed toward containers with one to two families. In A. gambiae, > 100 microsatellite markers have been isolated and genetically or cytogenetically mapped.30 The microsatellite markers are co-dominant, highly polymorphic, and usually neutral, and therefore more powerful in determining the genetic relatedness among mosquito individuals than dominant RAPD markers.31 Thus, these microsatellite markers represent excellent molecular tools for inferring genetic relationship among anopheline mosquitoes in a habitat and for studying their oviposition behaviors. Furthermore, the mother–larva inference made with microsatellite markers can be verified using the polymorphism in the mitochondrial NADH dehydrogenase subunit 5 (ND5) gene in A. gambiae.32

Here, we used nine microsatellite markers to estimate generic relatedness among A. gambiae larvae from aquatic habitats around a hut and to infer their maternity from the female mosquitoes collected in the hut. This study addressed three questions related to mosquito oviposition behavior: 1) what was the genetic relatedness among the larvae from each habitat; 2) did a female mosquito deposit her eggs in more than one aquatic habitat; and 3) if a female laid her eggs in multiple aquatic habitats, what was the spatial distribution of the sibling larvae around the hut?

Genomic DNA was extracted from individual mosquitoes and larvae.34 Because A. gambiae and A. arabiensis are morphologically indistinguishable, the rDNA–polymerase chain reaction (PCR) method was applied to identify specimen within the A. gambiae species complex.35,36 Up to three PCR reactions were conducted for identification of one specimen.

To verify the inferred relationship between female adults and larvae from the microsatellite markers, a segment of the ND5 gene was amplified using primers 19CL and DMP3A32 and was double-strand sequenced with the ABI PRISM BigDye Sequencing Kit (Applied Biosystems, Foster City, CA) in 5 female mosquitoes and their 17 inferred larvae, with 2–5 larvae in each female–larvae group.

Pairwise relatedness (r) for larvae from each habitat was calculated using a regression measure available in Kinship 1.0.40 Genetic relationship between two individuals was categorized as unrelated (r ≤ 0.125), half sibling (0.125 < r ≤ 0.375), or full sibling (r > 0.375).41 The mean genetic relatedness of larvae per habitat was calculated using Minitab 12.23 (State College, PA).42 Because of unequal variances and small sample sizes, the average relatedness was analyzed between habitats with three or more larvae and with two larvae by the nonparametric Mann-Whitney test in Minitab. A likelihood-based parentage analysis was carried out using Cervus V 2.0.43 In Cervus, a log-likelihood statistic Δ (delta) was defined for resolving maternity. Using allelic frequencies from the studied population, a simulation program generated criteria for Δ that permitted assignment of maternity to the most likely female with a known level of statistical confidence.43 In this study, 10,000 permutation tests and maternal assignment at 95% confidence were used. In male larvae, the sole microsatellite allele on Chromosome X did not affect the results of pairwise relatedness and likelihood-based parentage analyses because these were based on individual genotype and allelic frequencies.

The sequencing results were compared with those in Gen-Bank to verify that they were the target mtDNA fragment. The ND5 gene sequences were aligned using Bioedit44 to detect base pair variations, particularly within a larval group with a mother assigned by Cervus.

Among the 250 A. gambiae larvae genotyped, 135 were assigned to 54 female mosquitoes at 95% confidence. According to the larval distribution among the habitats, there were from 1 to 22 females who chose the same habitat for their offspring, and one female had one to three larvae at a habitat (Table 1). In total, 115 larvae had no assigned mother, indicating their mothers were either not identified or not captured. For one habitat, there might be 1–22 larvae without any assigned mother. The habitat use by females is shown in Figure 3. When pooled, 43.4% of the females used one single habitat and 56.6% occupied multiple habitats as revealed by the mother–offspring inference.

Each of the five A. gambiae females sequenced for the ND5 gene segment (665 bp, positions 6,896–7,560, sequenced by Beard and others45; GenBank no. L20934) had a unique haplotype. All of the larvae (two to five for each female) shared the same haplotype with their assigned mother (Table 2). This confirms that the maternal inference by microsatellite markers and likelihood method produces highly confident results.

The distribution of mosquito larvae is generally determined by the oviposition sites selected by females.2 The local dispersal of A. gambiae could be driven by the search for oviposition sites. Increased adult dispersal caused by females searching for a suitable breeding site may facilitate the spread of malaria parasites. Control strategies against the malaria–vector mosquitoes at immature stages, including efforts to remove or destroy breeding sites, could be highly effective and could complement adult control interventions. They should be given priority for further development, evaluation and implementation as an integral part of the Rolling Back Malaria project.47

It is well known that A. gambiae is highly anthropophilic. A higher proportion of A. gambiae larvae in habitats closer to huts was reported in the same area used for this study.21 However, such a relationship was not found in this study because only one hut site was surveyed even though A. gambiae was predominant there.

Of the 16 polymorphic ND5 nucleotide sites, 4 were new and 3 were detected only in A. arabiensis by Besansky and others.32 None of these nucleotide substitutions resulted in an amino acid replacement. With a high level of polymorphism, this segment of the ND5 gene is an ideal genetic marker not only for maternal inference, but also for systematics, evolution, and population genetics studies on anopheline mosquitoes.32,47 Although the female–larvae likelihood inferences were supported by the ND5 sequences, more microsatellite markers and genotyping data from candidate males may be used in the future to provide more power for distinguishing the female–larvae relationship and to verify the inferences in this study.

Anopheles arabiensis is also an important malaria vector in sub-Saharan Africa. The research methods used in this study can be applied equally to this sibling species to infer its oviposition behavior. Interspecific competition between the two sibling species has been shown to have a detrimental effect only on A. arabiensis.48,49 However, all 63 A. arabiensis larvae in this study shared habitats with the A. gambiae larvae. It is therefore unclear if a female mosquito will attempt to avoid a habitat occupied by its sibling species.

Mean relatedness and inferred sibling frequency, mother number, and range of larval numbers to a mother at each habitat