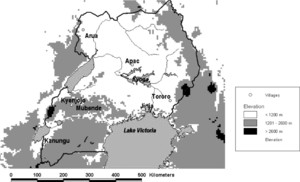 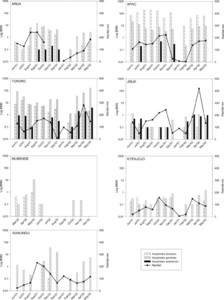 VARIATION IN MALARIA TRANSMISSION INTENSITY IN SEVEN SITES THROUGHOUT UGANDA

Knowledge of the baseline malaria transmission in a given environment is important to guide malaria control interventions. However, in Uganda, recent information on malaria transmission intensity is lacking. Therefore, a 1-year entomological study was conducted in seven ecologically different sites throughout the country to assess spatial and temporal patterns in malaria transmission intensity. Anopheles gambiae sensu stricto was the main vector in five of the seven study sites, and An. funestus was the most important vector in the two other sites. In a peri-urban village, An. arabiensis contributed substantially to malaria transmission. Clear differences in annual entomological inoculation rates (AEIR) were observed between the study sites, ranging from 4 infective bites per person per year in the southwestern part of the country to >1,500 infective bites per person per year in a swampy area near the Nile River. Between villages with parasite prevalences of ≥ 80% in children between 1 and 9 years old, a 4-fold difference in AEIR was observed. Based on the observed behavior of the vectors, insecticide-treated bed nets will be highly effective in controlling malaria. However, in the high transmission areas, additional measures will be needed to reduce the malaria burden to acceptable levels.