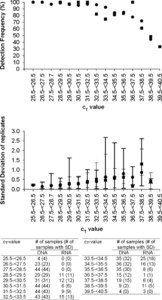 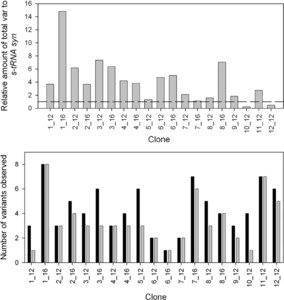 Antigenic variation in Plasmodium falciparum erythrocyte membrane protein 1, caused by a switch in transcription of the encoding var gene, is an important feature of malaria. In this study, we quantified the relative abundance of var gene transcripts present in P. falciparum parasite clones using real-time reverse transcription-polymerase chain reaction (RT-PCR) and conventional RT-PCR combined with cloning and sequencing, with the aim of directly comparing the results obtained. When there was sufficient abundance of RNA for the real-time RT-PCR assay to be operating within the region of good reproducibility, RT-PCR and real-time RT-PCR tended to identify the same dominant transcript, although some transcript-specific issues were identified. When there were differences in the estimated relative amounts of minor transcripts, the RT-PCR assay tended to produce higher estimates than real-time RT-PCR. These results provide valuable information comparing RT-PCR and real-time RT-PCR analysis of samples with small quantities of RNA as might be expected in the analysis of field or clinical samples.